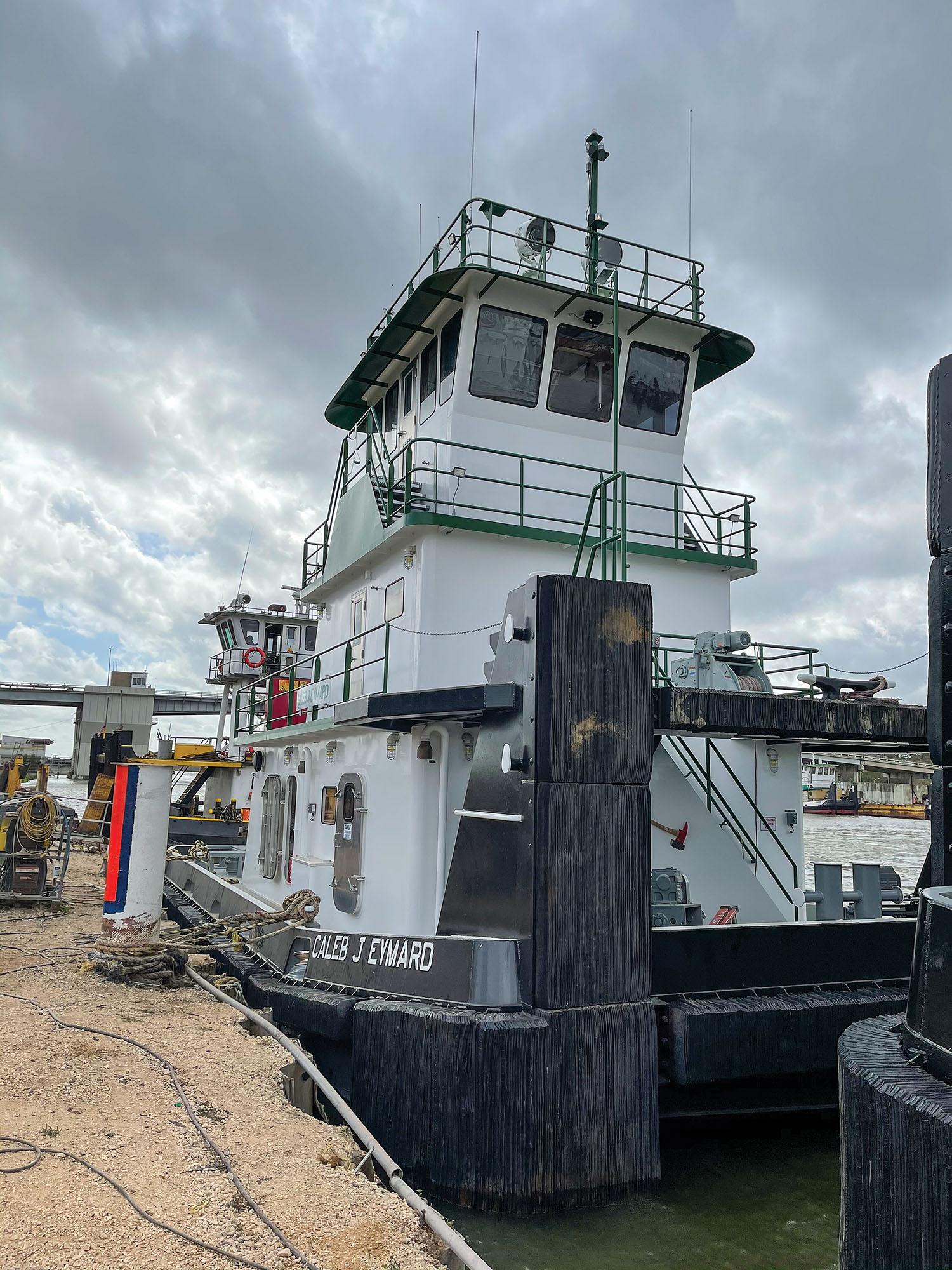 Mv. Caleb J. Eymard Was A Long Time In The Making

Eymard Marine Construction & Repair Inc. recently completed a 1,500 hp. towboat that was a long time in the making. Named the mv. Caleb J. Eymard, it was constructed for the firm’s sister company, Eymard Brothers Towing Company Inc. What is notable is the fact that the Harvey, La., shipyard did not complete the towboat until a full five years after starting to work on it, which goes to show just how busy the yard was during that time. It remains so today. The hull was laid in 2015. The boat was completed November 30, 2020.

The Caleb J. Eymard is the third vessel with that name. The first and second were built in 2006 and 2012 but were subsequently sold and renamed.

“We’ve been trying to use the name in our fleet for a number of years, but, you know, we just haven’t been able to say no to a buyer,” said Lisa Eymard, chief financial officer. The current Caleb J. Eymard began as a project boat that the shipyard worked on in its spare time, something that was in short supply during the 2015–2020 stretch. Eymard built 25 or so boats in that period, about five per year, and recently had to lease neighboring acreage to accommodate its increased productivity.

“It looks like this time, though, the name will stick,” Lisa said. In all, the shipyard has produced 43 vessels to date at the Harvey location, although many more can be credited to the Eymard family.

The new boat is named for the grandson of Gary Eymard Sr., one of three brothers, each of whom, in the 1980s, got into the boat business started by their father, Louis J. Eymard. With the death of one of the brothers, and the downturn of the oil industry, the brothers drifted into their own businesses.

And so, in 2000, Gary Eymard Sr. formed Eymard Brothers Towing Company, which owns three vessels, two of which work for ADM. In 2008, he established another company, Eymard Marine Construction & Repair. Both companies are solely owned by Gary Eymard Sr. and are tied into a holding company named Port Harvey. Also, at the two-company enterprise are his oldest son, Gary Jr.; his daughter, Lisa; his youngest son, Christopher; and his grandson, Caleb.

Caleb joined the firm out of high school and now, in his ninth year with Eymard, is involved with logistics, making sure the yard has the essential material and supplies it needs when it needs them, Lisa Eymard said.

Designed by Entech with a short hull for work in and around barge fleets, the towboat Caleb J. Eymard measures 60 by 26 by 9 feet, 6 inches. It has a pilothouse eye level of 27 feet.

The newly delivered vessel is powered by twin Cummins (Mid-South) QSK 19 diesel engines, which provide 750 hp. each and are mated to 6:1 Twin Disc 5222 gears from Sewart. The wheels are four-blade, 68- by 59-inch Kahlenbergs from Donovan Marine on six-inch shafts with dripless packing glands. Two 50 kW John Deere generators provide auxiliary power. The engines are cooled by a Duramax cooling system.

The steering system is Hydra Force electric-over-hydraulic. Alarms are by Blair Plaisance and Kirk Foret. There is an Ahead six-man wastewater treatment unit. Inside the cabin, for a four-man crew, are two staterooms and one bathroom with two 3-ton air conditioning and heating units from Gauthier Air. Inside the hull is tankage for 14,600 gallons of fuel and 7,000 gallons of water.

Wheelhouse Electronics furnished the navigation and communication package. On deck are two Patterson 40-ton winches. The hull is protected by Schuyler bumpers.

The boat is currently working at an ADM fleet on the Lower Mississippi River. Another different-sized spec boat will be started this spring at Eymard Marine Construction & Repair. Whether it will take five years to complete is anybody’s guess, Lisa Eymard said, adding, “It all depends on supply and demand.”