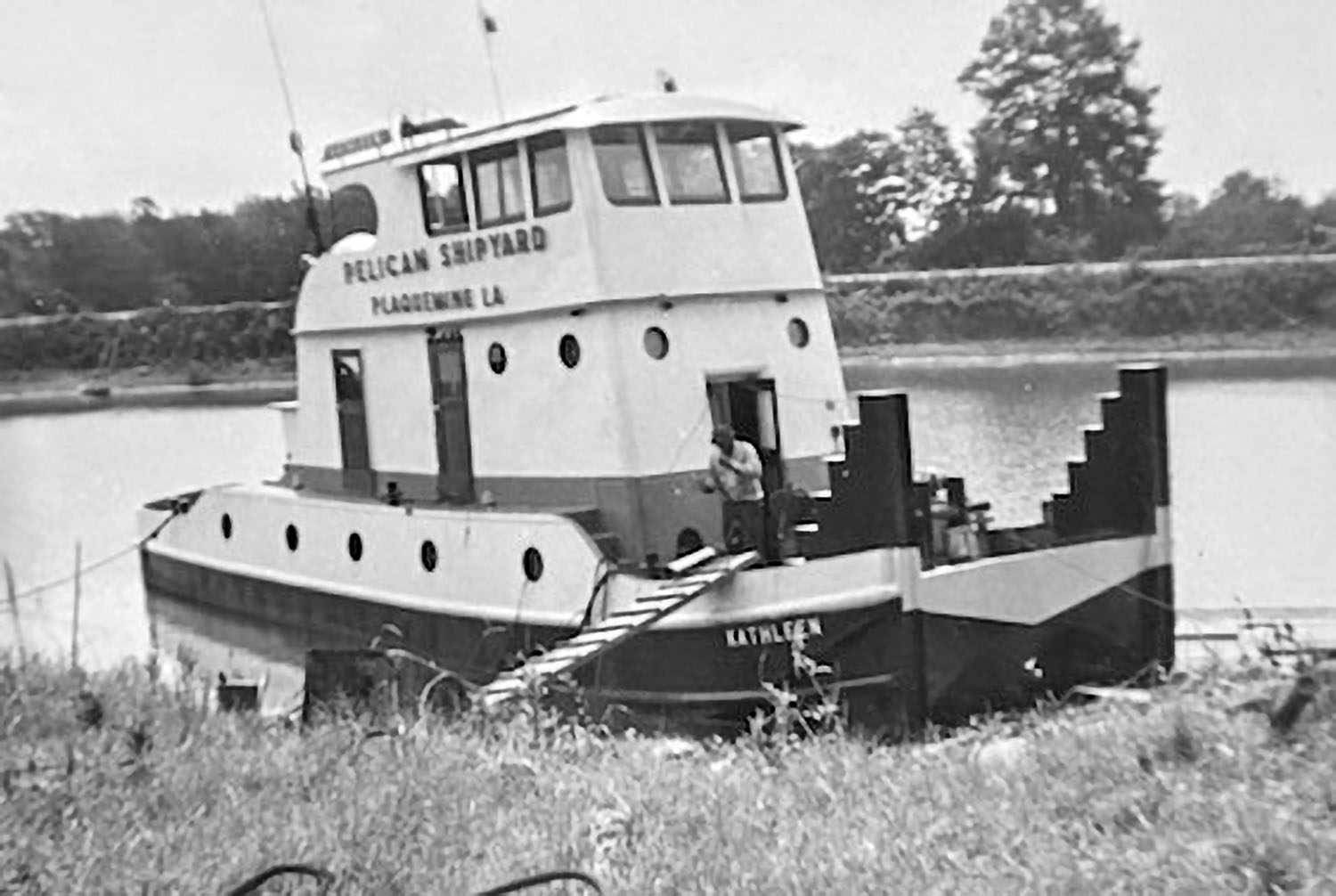 The mv. Kathleen has been tripping tows through the locks between the Lower Mississippi River at Baton Rouge, La., and the bayous that connect to the Gulf Intracoastal Waterway (GIWW) for close to 70 years.

For that entire time, the Kathleen has been part of the Businelle Towing family, now in its fifth generation of family leadership.

Their family story, and that of the Kathleen, is one firmly connected to the waterways of south Louisiana and the maritime industry that thrives there.

“I think they started building it in about 1950, and they christened it in 1952,” said John Wayne Businelle, the third-generation, semi-retired owner-operator of Businelle Towing and Pelican Ship Yard & Machine Shop, where the Kathleen was built.

Businelle’s grandfather, Herbert J. Businelle, started Pelican Ship Yard in 1925 in Plaquemine, La., on Bayou Plaquemine and near the lock that connected the bayou to the Mississippi River. Herbert’s son, John H. Businelle, led the family to build the Kathleen and start the family towing company. He named the Kathleen after his third daughter. A previous wooden-hulled boat, the Judy Ann, was named after John H. Businelle’s oldest two daughters. He later built a cabin boat and named it after John Wayne.

The Kathleen was built in the post-World War II years, when barge traffic was picking up on the GIWW.

“Originally, the Kathleen had three Army surplus GM 671s in it,” John Wayne said. “That made it about 500 hp. People thought he was crazy putting three engines in it, because towboats didn’t need that much power back then.”

For decades prior, Pelican Ship Yard had specialized in wooden vessels, capitalizing on both the Businelle family knowhow and ongoing work to construct the Morganza Spillway nearby. The company also did construction and conversion work related to the war effort.

John H. Businelle actually spent time working at the Nadler Foundry & Machine Works in Plaquemine to learn how to operate a lathe to make his own rudder shafts, John Wayne said.

The Kathleen was originally a small, two-deck boat, with smooth lines. It was purpose-built and went right to work.

“They started out helping boats through Plaquemine Lock,” John Wayne said. “[The lock] was so short that it would only fit one boat and one barge at a time. My dad started shifting barges through there, and that was the beginning of Businelle Towing.

“When he wasn’t shifting through the locks, he would take barges to Texas,” John Wayne added. “In that time, it was mostly tow-lining. There was not very much pushing.”

Plaquemine Lock opened to navigation on April 9, 1909, and it offered an incredible 51-foot lift between Bayou Plaquemine and the Mississippi River. At the time, among fresh-water locks, Plaquemine Lock boasted the highest lift in the world. But the lock was also tiny, measuring only 260 by 55 feet, and as the years marched on, the maritime industry needed a larger lock for moving cargoes between the river and the GIWW.

The answer came in 1961 when the Port Allen Lock opened just across the river from Baton Rouge. Port Allen Lock measures 84 feet wide by 1,200 feet long, significantly longer than Plaquemine Lock. And while the maritime industry gained a new and more efficient lock, the Kathleen remained a steady assist vessel. The Kathleen proved to be possibly the last boat to go through Plaquemine Lock, and one of the first through the new Port Allen Lock. The Kathleen also trips barges through Bayou Sorrel Lock, located farther south on the GIWW route. That lock, which opened in 1952, measures 56 feet wide by 790 feet long.

As the 1960s went by, towboats and barges were getting bigger, and the Kathleen was now undersized, so John H. Businelle sent the towboat back to Pelican Ship Yard again.

“In the summer of 1971, he decided to make it wider, longer and taller,” John Wayne said. “He was helping boats through Bayou Sorrel by that time. They had finished the intracoastal route, and barges were getting taller, so the boat needed refurbishing. We did all that.”

Today, look closely at the Kathleen’s gunwale for clues to its 1971 refurbishment. The original gunwale is inset, with the later hull and lower gunwale set outside of it.

“We just double-hulled the bottom, extended it out, and added wing tanks on the side for fuel and ballast,” John Wayne said. “We kept all the superstructure.”

The shipyard also, notably, added a third deck to the Kathleen, boosting the wheelman’s eye level. After the refurbishment, the Kathleen measures 50 feet by 22 feet.

About the time Pelican Ship Yard was finishing rehulling the Kathleen, John Wayne finished his military service and joined the company. He said he can remember plenty of good times on board the Kathleen.

“We spent a hurricane on there, and it blew all the windows out on one side,” he said.

John Wayne fondly told of a dog he had that loved riding on the boat, tripping barges through the locks.

“When he heard the phone ring, he’d go down and wait at the boat,” he said.

En route to his next customer at night, John Wayne would sometimes spy and shoot nutrias in the bayou.

“[The dog] would jump off the front of that boat and swim to get it,” John Wayne said. “I never taught him a lick. I’d skin it and cook it for him.”

By 1991, business for Businelle Towing had grown to the point that the company added a second boat to its fleet, the mv. Theresa B, named for John Wayne’s mother. The company finally repowered the Kathleen in 2008, trading the old World War II GMs for Cummins QSL9s. The Kathleen now boasts 855 hp.

John Wayne attributed much of Businelle Towing’s success to its location between Port Allen and Bayou Sorrel locks.

“It’s a good job, and we’re the closest company,” he said. “Other companies have tried but weren’t able to make it, because they’re so far away. We were just in the right place at the right time.”

But the foundation of the business is the family bond that holds it together. From Herbert and John Businelle, to John Wayne and his brother, Richard, to John Wayne’s son and daughter, Michael Businelle and Rachel Templet, and now with John Wayne’s grandsons, Brennan and Nick Templet, five generations have built the business, along with the help of close family friend and operations manager Philip Weber. The family has also made a name for itself musically, John Wayne said, playing in a band together from his youth until now.

These days, John Wayne said he spends much of his time working on his 1957 Bel Air, just a short walk from the Businelle Towing office. He lets his kids and grandkids lead the business for the most part.

“Mostly I try to let them do it on their own,” he said. “That’s the way we learned it.”

As for the Kathleen, the venerable towboat’s run is nearing its end.

“Mostly it’s the age of the boat,” John Wayne said. “We’re starting to see metal fatigue in some places.”

The plan is for Businelle Towing to soon purchase another boat, likely the mv. G.W. Dunn, which John Wayne said he expects to rename in honor of his father and his brother. Then, the company will refurbish the Theresa B at nearby Verret Shipyard. When the Theresa B comes back into service, it’ll be time to retire the Kathleen.

After close to 70 years in service, the Kathleen deserves a spirited sendoff. And John Wayne said he knows just how to do it.

“I’m going to call all my family and some friends, and we’ll make one last trip in it,” he said. “Maybe go up to the Port Allen Lock. Cook a good meal. Maybe if it’s in the summertime, we’ll let them jump off and go swimming if they want. We’re going to make one last trip and decommission it after that.”

Caption for top photo: The Kathleen, built in 1952, has worked for Businelle Towing for its entire career.