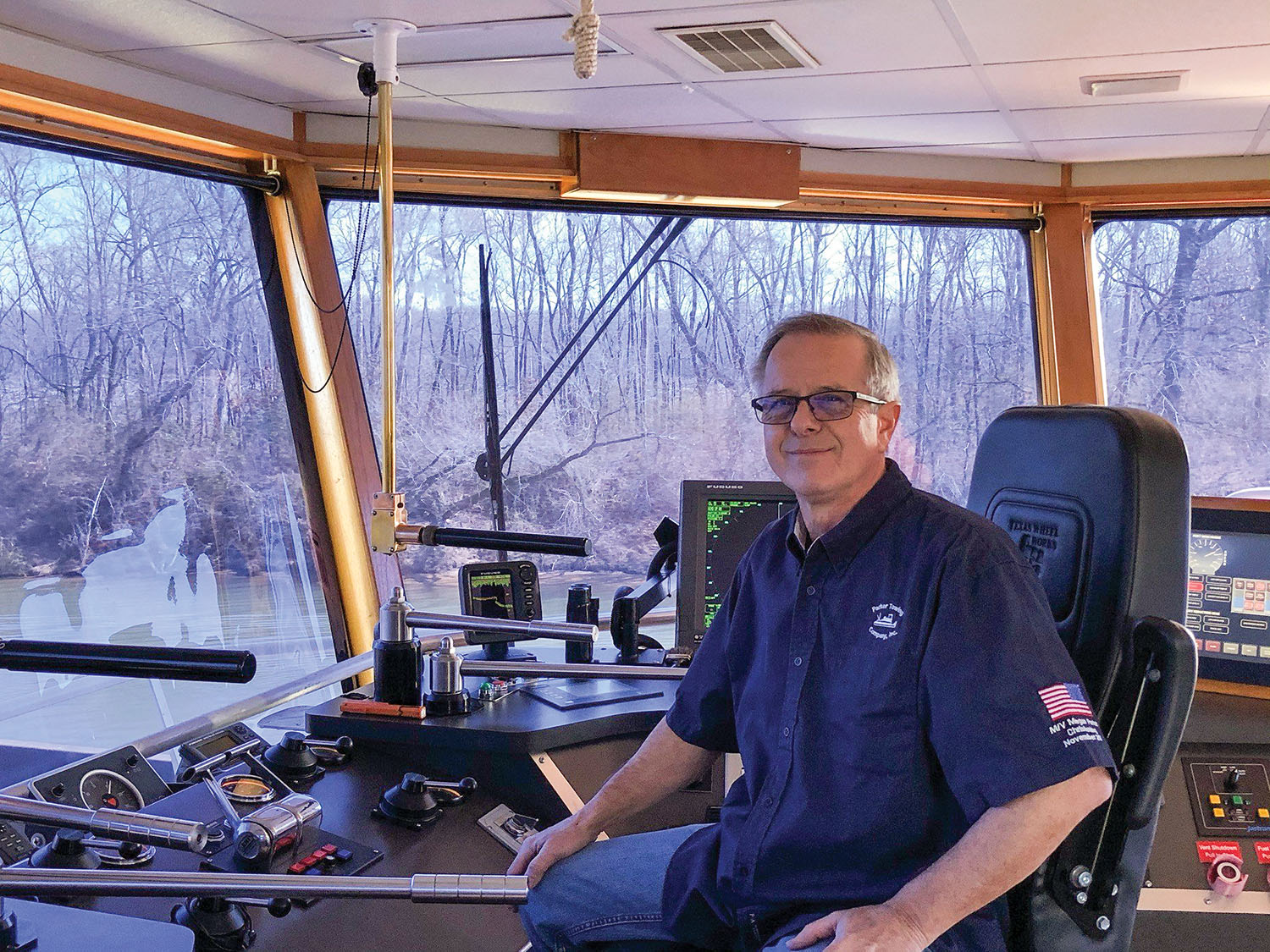 As a 19-year-old, Bretford Wildrick took a job right out of high school as a welder at Iowa Marine & Repair in Keokuk, Iowa. Wildrick, a native of Hamilton, Ill., near Mississippi River Lock & Dam 19, had grown up watching towing vessels and riverboats at work on the river. His first job was on a construction crew that was building the mv. Tom Edwards, an 800 hp. fleet boat, which was named after the owner of Iowa Marine & Repair.

Wildrick said the owner had intended for the mv. Tom Edwards to propel the business into the vessel construction market, but when that didn’t materialize, Wildrick suddenly found himself out of a welding job.

“It was either go find another welding job or go to work on the boat I built as a deckhand,” Wildrick said. “I was on that boat for about a year.”

Then, in August 1977, Wildrick traveled to Mobile, Ala., to visit family—a visit that would impact the rest of his life.

“I found a company called Warrior & Gulf Navigation in Chickasaw, Ala.; found them in the phone book,” he said. “I went directly there and put an application in.”

Wildrick said the person from Warrior & Gulf wasn’t too sure about hiring an Illinois kid who was just visiting in the area. Wildrick, though, was determined.

Wildrick’s first hitch was aboard the mv. Mauvilla, and its normal route was from Mobile to Birmingham, Ala., traveling on the Black Warrior-Tombigbee Waterway. The boat would push iron ore upriver and bring coal downriver for export. Wildrick said he’d never seen a river like that.

“I thought all rivers looked like the Mississippi River, but I discovered there are all kinds of little bitty dinky rivers that run towboats,” he joked.

Wildrick said the working conditions also caught him by surprise. Arriving to the boat on his first day, Wildrick was shocked to find that the crew consisted only of him and three others.

Wildrick said even the food and the accents of the other crew members were unfamiliar, with their Southern drawls and appetite for grits and fried food.

“I was almost in a foreign country,” he said. “I almost didn’t speak the same language.”

By 1979, Wildrick had earned his captain’s license. Then, in January 1981, married and with a baby, Wildrick took a job with Southern Marine on a fleet boat, hoping to spend more time at home. Unfortunately, fleet boat life wasn’t all Wildrick had envisioned.

“There’s not as much time as you think, and the grind got me down after a couple years,” he said.

So in May 1982, Wildrick placed a call to Tuscaloosa, Ala.-based Parker Towing Company. As it turned out, the company was accepting applications, and Wildrick wasted no time applying.

“I worked the night shift, and when I got off at 6 in the morning, I drove to Tuscaloosa, filled out the paperwork and got a job,” he said.

He started out aboard the mv. Dallas, doing shifting work at the Barry Steam Plant near Mobile. He later served as captain for 17 years aboard the mv. Bobby Joe James. Now he’s the lead captain aboard the mv. Megan Parker, oftentimes making the same run he had made with Warrior & Gulf.

“It’s one of the biggest boats in the Parker fleet, and the most powerful,” he said of the 4,600 hp. mv. Megan Parker. “I’ve been the captain on it for nine years, since it came out brand new.”

Wildrick cherishes his time with Parker Towing, the team and relationships he has there, and the interesting tasks his crew has had over the years. Jobs like delivering the first Mississippi riverboat casino to Tunica, Miss., and, more recently, bringing a couple tows of grain barges down from the Upper Mississippi River.

“We went to Prairie du Chien, Wis., the first trip, and went to Keokuk, Iowa, the second trip,” he said. “We brought 15 loads out each time and picked up five more and went down the river with 20. We stayed on the boat and worked 50-something days.”

Just this past month, Wildrick got to be captain on duty during the filming of a new reality television show where the host learns to do everyday American jobs, like how to be a deckhand.

“He came and trained to be a deckhand for a few days,” Wildrick said. “We didn’t get to work him too hard.

The host did learn how to build tow and what it takes to transit a lock, he said. The show will premier later this year on a major cable network.

Now in his 44th year working on towboats, Wildrick, 64, said he’s just about ready to retire, and he plans to do so in January 2022. A cancer survivor and someone who treasures childhood days spent with his mother and grandparents, Wildrick said he plans to spend his retirement years adventuring with his wife, kids and grandchildren. Wildrick and his wife of 15 years, Cindy, have three children between the two of them and seven grandchildren. He enjoys woodworking, riding dirt bikes with his 12-year-old grandson and traveling.

He said he already has reservations booked for an extended family trip to Mexico for Thanksgiving this year.

“I can’t live life on a ‘maybe it’s going to shut down,’” he said of traveling during the pandemic. “I’ve already gone through cancer, and I may not live tomorrow, so I’ve made reservations and bought airplane tickets. I’m going to travel with my wife and take my grandkids to a nice, all-inclusive family resort for the week.”

Wildrick said he just wants to pour memories into his grandkids, much like his grandparents did for him.

“I remember times with my grandparents, and I want them to remember the times with me and my wife,” he said. “It was a fun time, and they really meant a lot to me, and that’s what I really want to leave behind. It makes me feel like an old softy rather than a salty seaman.”