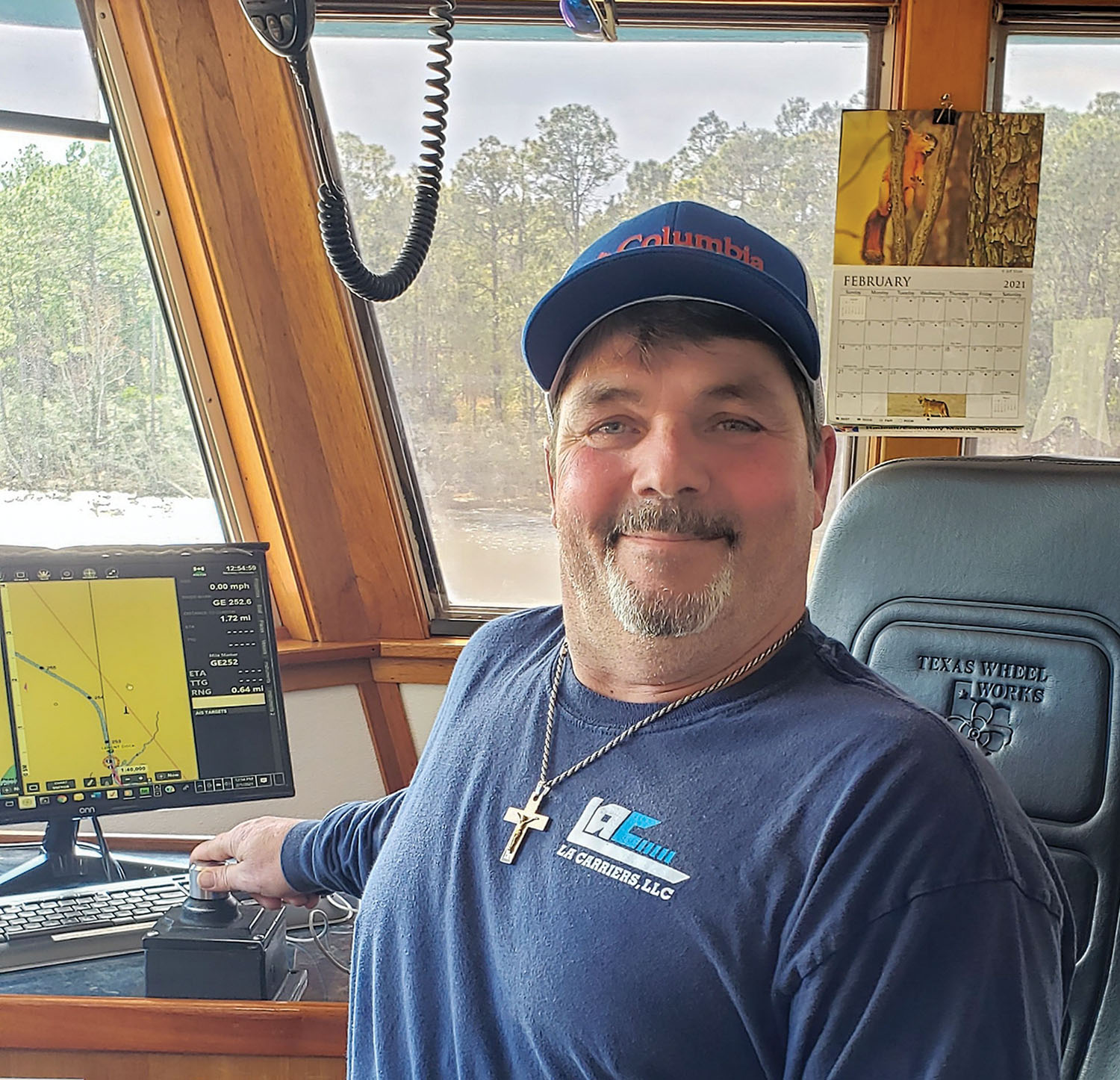 Capt. Ronnie Paul Stevens, 51, knew at an early age he was going to be the captain one day of a towing vessel in the commercial marine industry. He loved being on the water and was raised around boats. His father worked at a shipyard in Lockport, La., where he was born and raised. Plus, his two best friends and their father worked on boats.

“Why wait?” he remembers asking himself when he was a sophomore in high school. “Why not just start my career right away, and make a good living doing what I love?”

At 16, then, eager to get started—and with a release from school by his parents required because of his being a minor—Stevens dropped out of school and went straight to work as a deckhand on the mv. Vicki Lynn, which was an 800 hp. towboat in the fleet of St. Charles Towing Company, where his friends, the Dufrenes, worked.

“One of my first trips,” he recalled, “was hauling coal from Pensacola to Baton Rouge.” He said he knew then he had made a good decision. “Just being able to travel to all the places I’d never been to before, and to go by water and see the countryside and various towns and all, was a great experience.”

In 1993, when he was 19, he sat for his pilot’s license while working as a fleet mate at Triangle Fleet in Reserve, La. “But then, I broke my back in a car accident when my car ran off the road and hit a telephone pole. I’m lucky to be alive,” he said. “It took me two years to recover.”

After that, Stevens went back on the boats, this time as a captain for Lee Marine Services in Larose, La, he said, doing offshore supply work for McDermott. That led to a four-year stint with Central Gulf Towing in Cut Off, La., where he continued servicing the oil and gas platforms in the Gulf of Mexico.

He joined LA Carriers in 2000. His first boat was the mv. Karen Koby, a 900 hp. towboat that LA Carriers used to work the fleets around Beaumont, Texas, he said. Next was the mv. Trey Paul, a 600 hp. vessel that he captained for seven years, and now the Mon Ta, which he has been on for nine years. It is a 2,000 hp. towboat that the company currently uses to push a “six-pack” of rock barges down the Tombigbee River to Panama, Fla.

Stevens’ son, Nathan, is a deckhand on the Mon Ta, he said, adding that he “definitely” wants to be a pilot. His other son, Ronnie Michael, works as a deckhand, too, but is currently taking some time off. Stevens and his wife, Gerine, have two daughters also, and a total of five grandchildren.

LA Carriers hauls mostly scrap iron, but also industrial salt, steel products, urea fertilizer, coal, grain and other bulk commodities. Occasionally, the company will get calls to transport large objects that require a higher-than-normal pilot eye-level, which is why many of its vessels have an elevated pilothouse.

LA Carriers, now with a fleet of 15 vessels, was founded in 1986 by recently deceased Capt. Russell “Bosco” Paul Plaisance. He started with an eighth-grade education and one boat that he used in hauling scrap iron from Tampa Bay to New Orleans.

“Our dad was a proud man and proud of his accomplishments,” said Tommy Plaisance, operations manager. “In Capt. Ronnie, we see similar traits to our dad, a dedicated employee who has high expectations for his crew and has a stellar maintenance program for any of our assets at his command. Customers look for ways to make certain that he is on board when a job starts because of his pride and professionalism.

“Tasked with learning the new guidelines of Sub M regulations,” Plaisance continued, “Capt. Stevens and his vessel, the Mon Ta, were the first in our fleet to receive a COI.”

Capt. Ronnie, as they call him, said he feels very much at home at LA Carriers because they treat him as if he is an integral part of the family.