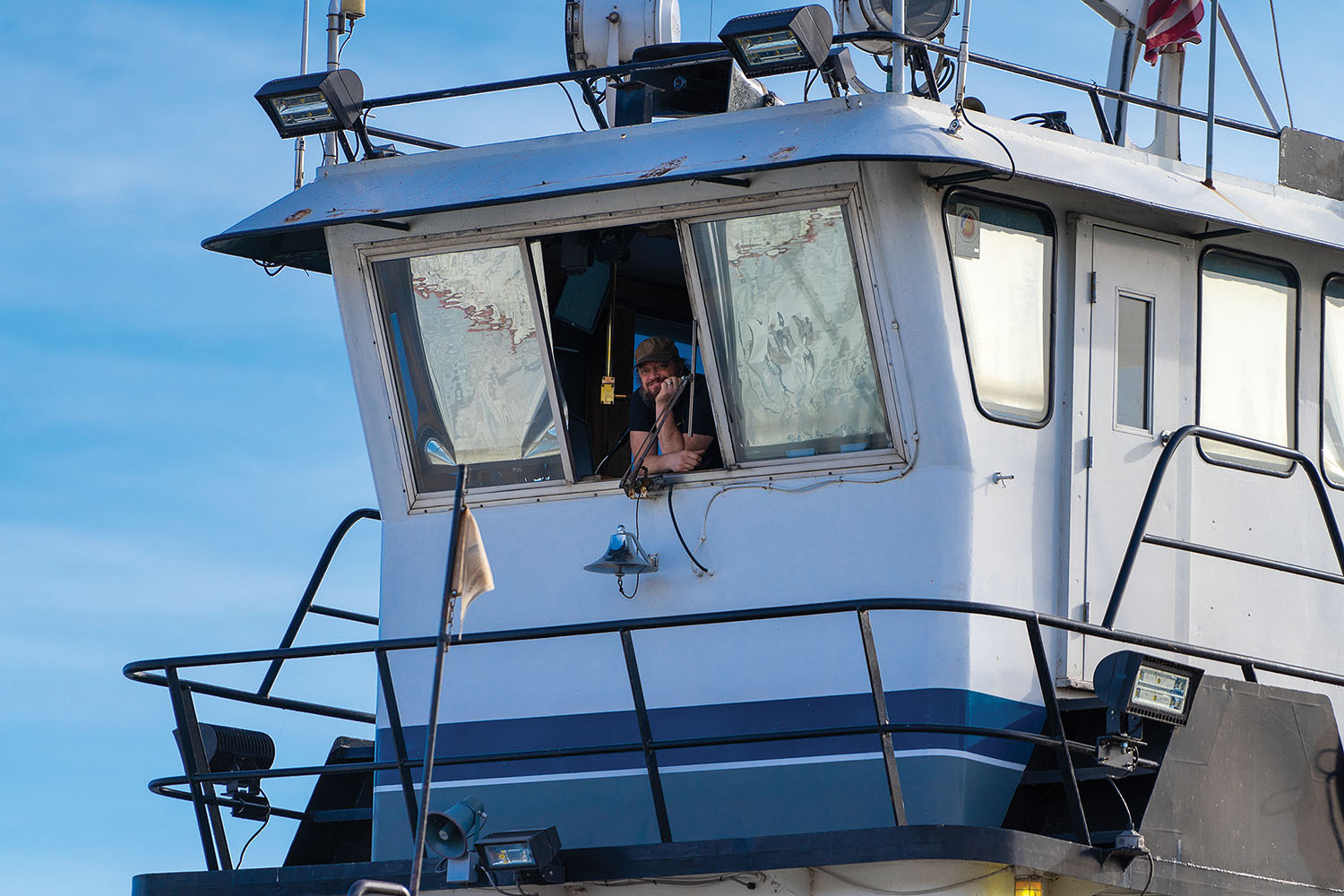 For inland towboat captains, probably the most basic difference in working conditions is between long-haul and harbor captains. Capt. Tom Hanes, long-time harbor captain for Upper River Services, has no doubts about which he prefers. “I like going home at night,” he told The Waterways Journal.

Hanes, a native of Linwood, Minn., a town of about 1,200 people near St. Paul, began decking at age 18. “My wife’s friend’s husband worked at Dakota Barge,” he said. It was the year Hanes’ first son was born, and he was looking for a job with a future. He joined Upper River Services four years later.

Hanes knew from the beginning that he wanted his captain’s license and spent seven years studying for it. He was helped by many older captains on his way up, each with his own strengths. “I liked the more ‘belligerent’ captains; there was quite a bit of hazing when I was coming up, and I’m not sure it would be done that way today,” he said. He remembers Capt. Phil MacFate, who “taught me how to build a tow; he said it was like playing chess with barges.” Pat Tuttle, Tom Fleming and Mike Toomey are other captains he learned from. “I can’t single out any one particular piece of advice they gave me. I just watched how they were, and how they handled the boats. They were all different.”

Hanes’ first captain’s issue was a restricted license, but he went on to earn an unrestricted Western Rivers license. That proved prudent, because Hanes had to switch to long-haul work after the 2007 economic downturn. He worked for Lewis & Clark in St. Louis Harbor and for Inland Marine on the Green River, assisting the I-35 bridge rebuilding project. “There were only four-barge tows on the Green River, but those currents were tricky,” he remembers. “It was pretty hairy; there were only four or five boats that ran it. It was so hilly that every rainfall just rose the water right away. A lot of the bends are hairpins, so you’d look across a corn field and see a boat going the opposite direction.”

Hanes found St. Louis Harbor much busier than his home region. “It was bigger, wider, faster and more dangerous,” he said. He recalls one time when Lewis & Clark wanted to send down a line of barges five long and one wide downriver, to be wired onto a larger existing tow. He will always remember pushing a tow 1,000 feet long and 35 feet wide five miles downriver to the tow. Lewis & Clark had “fantastic harbor boats,” he said.

Since he began in the wheelhouse, Hanes said AIS is probably the most significant change he’s seen. He thinks AIS charts have contributed greatly to safety. Being located so close to St. Paul, the area has had adequate broadband from relatively early. Upper River Services provides upgraded electronics on its harbor boats. “We have a lot of things that other harbor boats probably don’t have,” Hanes said. Those charts proved especially useful after the 2019 floods, which deposited tons of silt and also washed away a lot of buoys faster than the Coast Guard could replace them. Many are still waiting to be replaced; but virtual, electronic ATONs could be updated much more quickly. During the 2019 floods, “We spent a lot of time tripping to Lock 2 to assist grounded line boats,” he said.

Hanes’ career has evidently inspired his sons; both of them, 27-year-old Thomas and 23-year-old Jeremiah, are decking and working toward captain’s licenses. In fact, they work with their father.  The COVID-19 crisis brought a change in policy, Hanes said. “It used to be that we didn’t have family members work together, but that changed with the virus, since we were already living together.” He believes they are the only father-and-sons team working for Upper River Services, though he thinks there are brothers working together.