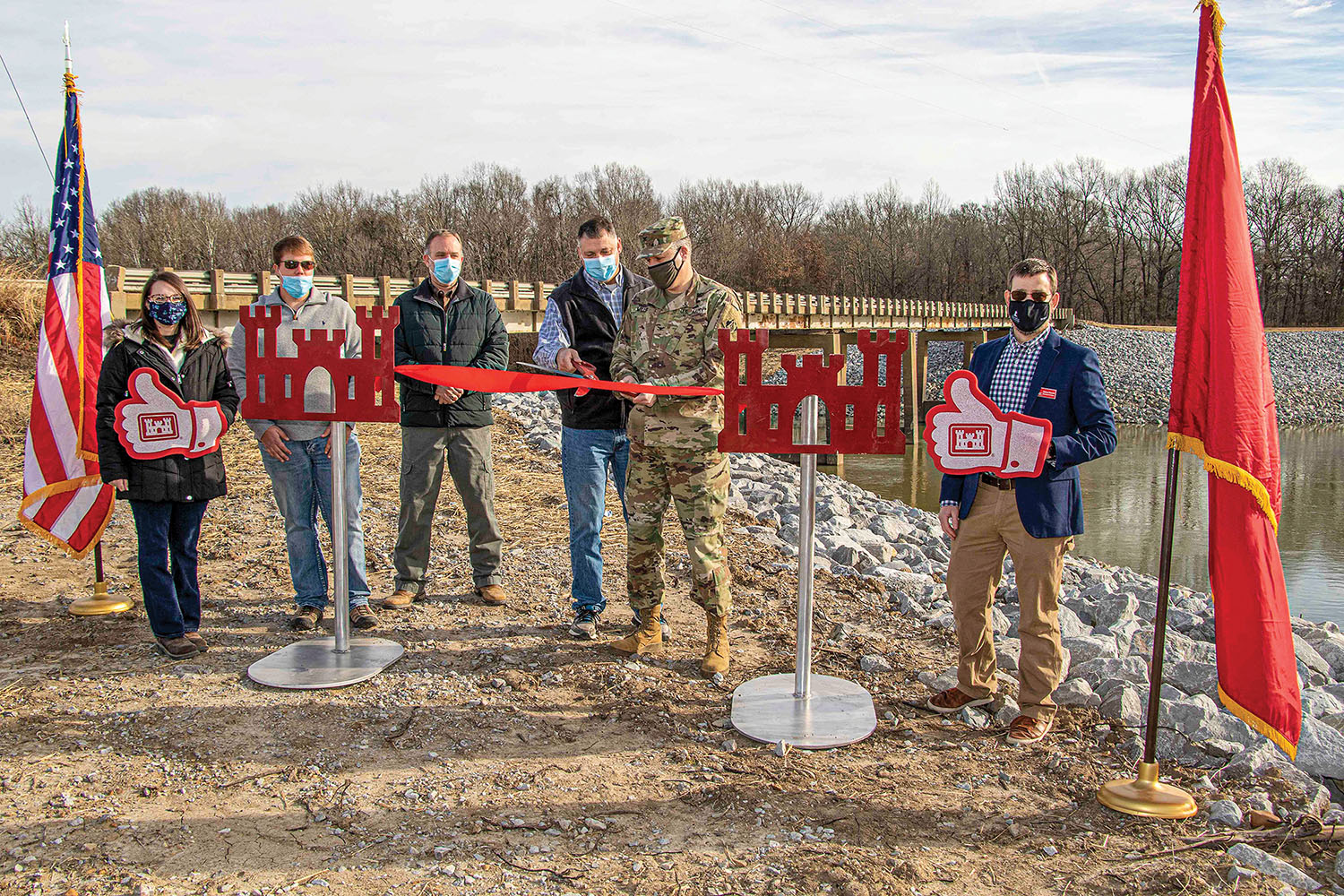 The day began with Col. Zachary Miller, Memphis Engineer District commander, other district leadership and members of the project delivery team gathering on the banks of the Mississippi River at Hopefield Point in Arkansas. They celebrated the completion of a $984,000 bank armoring project with contractor Midwest Construction.

The work involved placing 32,000 tons of riprap along the Arkansas bank underneath three Interstate 55 bridges: the Harahan, Frisco and Memphis-Arkansas.

“The Memphis District is responsible for maintaining a safe and dependable Mississippi River navigation channel at all times and for all river stages,” Project Manager Brian Schneider said. “This riverbank armoring improvement project was necessary to extend the existing revetment downstream to protect eroding, over-steepened banks and foundations underneath the Harahan, Frisco and Memphis-Arkansas (I-55) bridges.”

The contractor completed the work over three months in late 2020.

Next was a ribbon-cutting ceremony for another Arkansas bank-armoring project, this time to correct scouring downstream of a bridge over the St. Francis River.

Along with the Corps’ partner, the St. Francis Levee District of Arkansas, represented by Rob Rash, the Memphis Engineer District awarded a $2,786,197 contract to A Rock Construction Company Inc. to remove debris, reshape the channel and armor the bank with more than 27,000 tons of stone along the CR736 bridge over the river in St. Francis County, Ark.

“Over time, the erosive effects of water traveling along rivers can lead to bank scour, causing sediment, trees and debris to fall into the river,” Project Manager Amber Jarnagin said. “Left unattended, this kind of scour can also threaten nearby infrastructures such as bridges and underground public utilities. The maintenance this project accomplishes not only extends the life of the riverbanks in these regions, but it also protects crucial transportation routes supporting the livelihood of people in the surrounding communities.”

Next came celebrations for the completion of two different pumping station repairs.

Late in 2019, the Graham Burke Pumping Station suffered an engine failure during a high-water event, resulting in extensive damage to the engines. Without the pumps operating at full capacity, more than 150,000 acres in the White River Levee and Drainage District, along with the people living there, would be at risk during high-water events, according to the Memphis Engineer District.

Project Manager Marsalis Roddy said the design team stood out because the team moved so quickly to develop a technical scope of work for the project.

“Their hard work ensured that the pump station was down for operation a minimal amount of time,” he said.

A ribbon-cutting ceremony also celebrated the repair of the W.G. Huxtable Pumping Plants in Marianna, Ark.

Similar to what happened to the Graham Burke Pumping Station, the Huxtable station also failed during a high-water event in 2019. A service contract was awarded to Atlanta Gear Works Inc. for $1,098,362 to complete several repairs to get the pumping station back up and running. Beginning March 20, 2020, the contractor rebuilt two damaged gearboxes and performed vibration tests on 10 gearboxes at the plant. The work was completed January 15.

“The overhauls repair the extensive damage to the gearboxes that resulted from the failure,” said Roddy, who also served as project manager for the Huxtable pumping station. “The vibration tests will provide valuable insight and data regarding life expectancy and potential repairs needed for the remaining gearboxes. This pumping plant helps protect over 1.2 million acres of agricultural land in southeast Arkansas, and ensuring its operability is crucial to the district being proactive in minimizing the plant’s downtime and protecting this portion of the state from the hazards of flooding.”

The fifth and final ribbon-cutting ceremony was for two seepage remediation projects completed in Trotters, Miss., and Rena Lara, Miss.

In Trotters, construction crews worked to eliminate seepage along a 1,300- by 1,150-foot earthen berm as well as constructing six new relief wells.

“Under-seepage problems (extensive sand boils) were observed during high water events at this location along the Mississippi River Levee,” said Schneider, who also served as project manager on the  Trotters project. “Sand boils are the result of erosion and piping through the levee foundation which can progress to a levee breach. Landside berms and/or relief wells are two effective methods utilized to significantly reduce the risk of levee failure from under seepage.”

Both seepage remediation projects were completed in partnership with the Yazoo, Miss., Levee District. During the ribbon-cutting ceremony, the levee district was presented with an award for outstanding maintenance for the 62nd consecutive year.