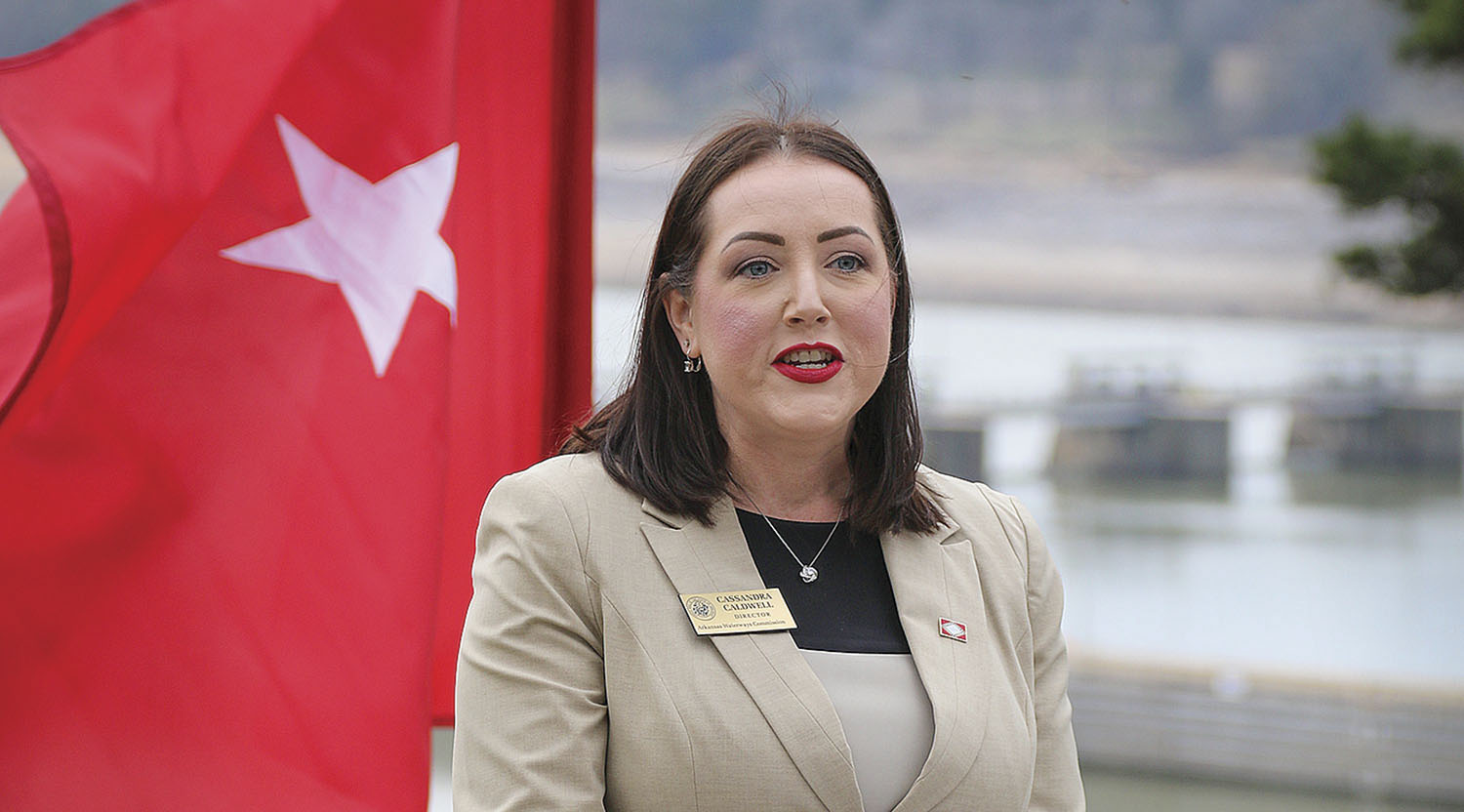 The Southwestern Division of the Corps of Engineers and its partners along the McClellan-Kerr Arkansas River Navigation System (MKARNS) hosted a media day March 9 to celebrate the 50th anniversary of the system that strategically connects the heartland of the United States with the rest of the world. The event was followed by the christening of the new Corps survey vessel Peevy.

The media-only event was livestreamed for the public March 9 on Facebook from the Dardanelle Lock and Dam Overlook in Russellville, Ark., as one of many commemorative events being held throughout 2021. According to Jay Woods, public affairs officer for the Little Rock Engineer District, about 50 people attended.

“The Southwestern Division, Little Rock and Tulsa districts, are honored to participate with our partners and support these events throughout the year. Having a media event like this allows us to tell everyone about the past 50 years and the future of the MKARNS,” said Brig. Gen. Christopher Beck, commander of the Southwestern Division.

In addition to Beck, who spoke about the system’s future, Stan Hastings, the MKARNS 50th anniversary celebration chairman for the Arkansas Oklahoma Port Operators Association, gave a history of the MKARNS. He was followed by Cassandra Caldwell, director of the Arkansas Waterways Commission, who gave a breakdown of the current state of the MKARNS.

The MKARNS is a versatile, 445-mile waterway, a crucial part of the nation’s transportation system providing navigation, as well as hydropower, recreation, water supply and fish and wildlife habitats.

The MKARNS is a multi-beneficiary system: water supply, navigation, fish and wildlife, recreation, hydropower generation and flood control (when considered as part of the Arkansas River Basin Project and its upstream reservoirs that control water flows).

The MKARNS serves a 12-state region, with the Tulsa Port of Catoosa being the most westerly inland river port that is ice-free year-round. The states include Arkansas, Oklahoma, Kansas, Texas, Colorado, Missouri, Nebraska, Minnesota, South Dakota, North Dakota, Montana and Idaho.

There are four designated Foreign Trade Zones on the MKARNS at the ports of Little Rock, Pine Bluff, Muskogee and Catoosa. More than 42 countries have traded commerce with the Arkansas River Basin region via the MKARNS.

Inland waterway transportation supports around 70,000 jobs in water transportation and around 800,000 jobs at industries dependent on barge-oriented commodities. The 2018 tonnage on the entire McClellan-Kerr Arkansas River Navigation System totaled 10.9 million tons, with a value of $3.5 billion.

It was in June 1971 that President Richard Nixon dedicated the MKARNS. After noting that cowboy humorist Will Rogers had once written a column poking fun at congressional spending by declaring he could get a harbor built on the Verdigris River, Nixon said the people of Oklahoma had gotten the last laugh on Rogers. He declared, “I believe that what is good for the farmer is good for his customers and good for America.”

Video of Nixon dedicating the opening of the MKARNS is available on Youtube at www.youtube.com/watch?v=d8kYwAZnnWY.

Following the 50th anniversary event, participants were invited to remain for the christening of the Little Rock District’s new Survey Vessel Peevy. The survey vessel is named after Robert Ulysses Peevy, who was born July 7, 1951, and died on August 23, 2011. Peevy served most of his long and dedicated career as a boat operator on similar vessels.

“His dedication to the U.S. Army Corps of Engineers, knowledge of the river, boat operating skills, easy-going personality and jovial spirit were just a few of the qualities for which he is fondly remembered by all who had the pleasure of working with him,” the district said in a statement.