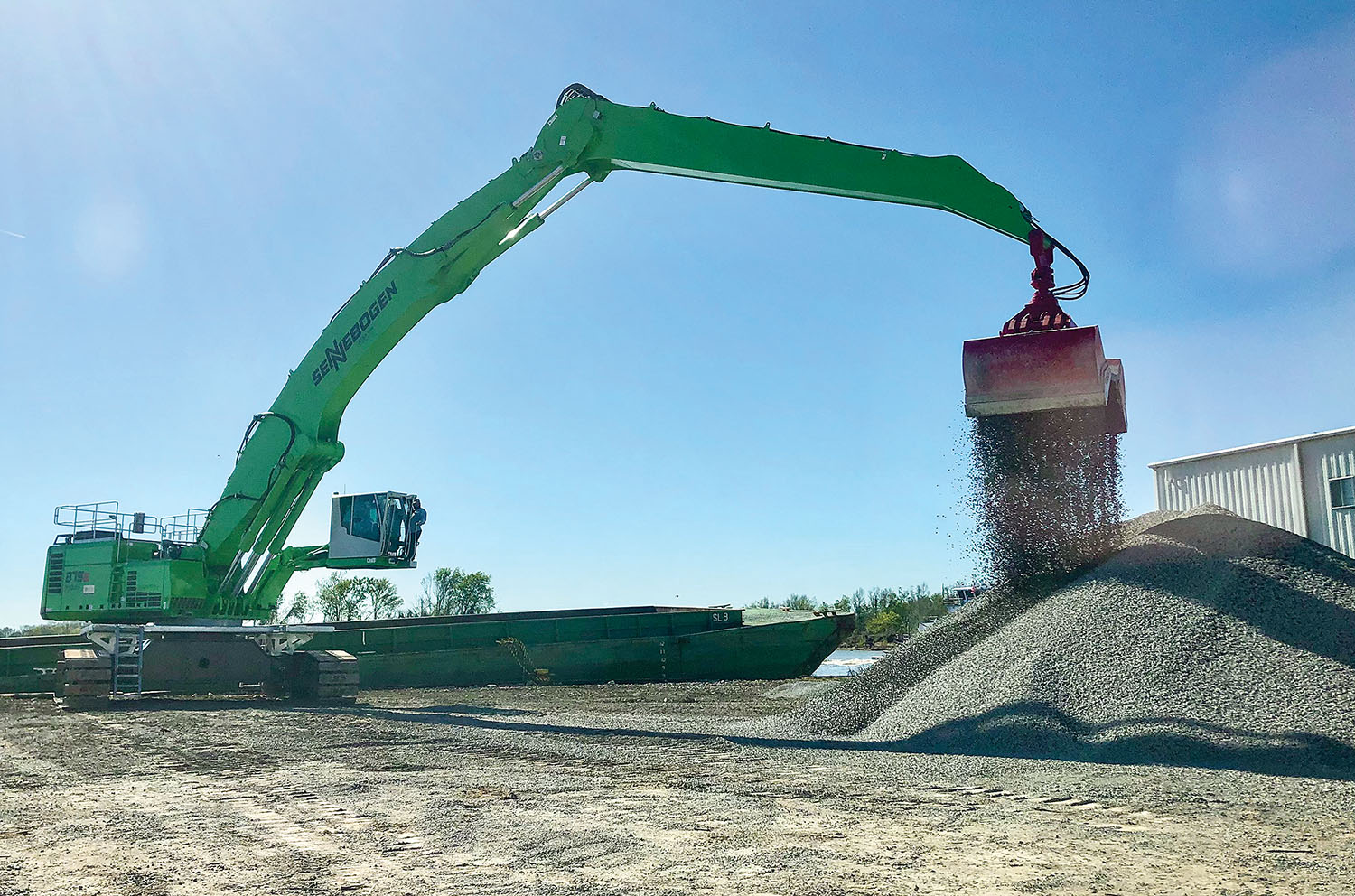 Although mobility might not be the first quality that comes to mind when talking about a 300,000-pound machine, that’s what attracted Chip Broussard to his new Sennebogen 875 R-HD material handler.

Broussard Brothers Inc., a leading marine and construction contractor on the Gulf Coast, is active in oilfield and pipeline projects as well as marine towing, dock and crane services. The company was looking for ways to be more competitive for bids for upcoming government contracts for seawall restoration work, but Broussard Brothers’ largest cable crane would only handle up to 150 tons per hour.

“We originally saw the 875 at CONEXPO,” says Chip Broussard, a third-generation member and current vice president of finance for the family-owned business. ”We also saw a Sennebogan in a rock yard near here; but we bit the bullet at CONEXPO and decided this is our best bet. We had seen similar machines in the area, but nothing of this size, and the other machines have to be welded down to the barge. What intrigued us was that the Sennebogan is on tracks. It doesn’t have to be welded down. At times we might be doing rock work and we want a crane on the ground; then we pick up another job and want to put the Sennebogan on the barge. Because of its versatility, we didn’t have to get another barge!”

Constantino Lannes, the president of Sennebogen LLC, explained another reason the machines are well-suited to marine work.

“All of our machines are engineered on a square footprint,” he said. “The slewing ring is centered on the undercarriage, and its load ratings are equal through 360 degrees of swing. That kind of balance is a valuable safety factor on land or on water, and it also gives the operator more flexibility to load and swing in any direction.”

Flexibility is high on Broussard’s list of qualities that the 875 brings to his fleet. “We can better utilize our different assets according to the application we’re on,” he said. “We just swap the equipment to get the right piece in the right place.”

He added that his 875 also came with a quickchange coupler that lets him easily attach a lifting hook, clamshell bucket or rock grapple.

“It’s very adaptable to our wide range of operations,” Broussard said. “Some of these rock jobs, the stones are very large, more than the clamshell can handle, so we have the grapple for that. We have also done some dredging with it, some maintenance work.”

This was where the 875 first showed off its capacity for production, he said. “We were loading some material barges, one that can hold up to 350 tons. We loaded it in about 20 minutes.”

Broussard said his first dredging project let the 875 shine in optimal conditions. In that situation, with short, easy swing cycles, he estimates that the 875 could move as much as 600 tons per hour. But in a more realistic application, such as shoreline restoration work that requires precise placement of man-sized boulders, Broussard said he is confident that the machine can maintain his target of 400 to 500 tons per hour. “We just increased our capacity by a factor of three or four times,” he said.

As Broussard gets the 875 out into more commercial projects, he said he looks forward to bonus profits that the machine will earn with its exceptional fuel efficiency. The giant material handler features Sennebogen’s “Green Hybrid” energy recapture system. An oversize hydraulic cylinder is mounted between the boom’s two lifting cylinders. This cylinder is used to compress gas on each downstroke of the boom. On the upstroke, the captured energy is released, like a compressed spring, to assist in lifting the boom and the load. The mechanical system reduces fuel consumption by as much as 50 percent.

“I’m anticipating that we’ll run on 8 to 10 gallons of diesel per hour: about the same gph. as a large excavator or our cable crane,” he said. “That’s great, but if you compare gallons per ton of material moved, it’s very impressive. We usually bid so many gallons of fuel to do the project; now our fuel cost will be cut in half, or even less.”

With the low operating costs, Broussard said he feels ready to take on the competitive coastal restoration market.

“There’s a lot of people chasing this business, as other sectors have slowed down,” he said. “They’re also investing in new equipment, new excavators, but I don’t know that they’re going to get the efficiency or the gallons of fuel saving that we get, and will not have the size of the 875. Besides, an excavator is not built for this kind of work. You have to add a counterweight to it, and then make other modifications. But this 875 is purpose-built for the kind of material handling we do here.”