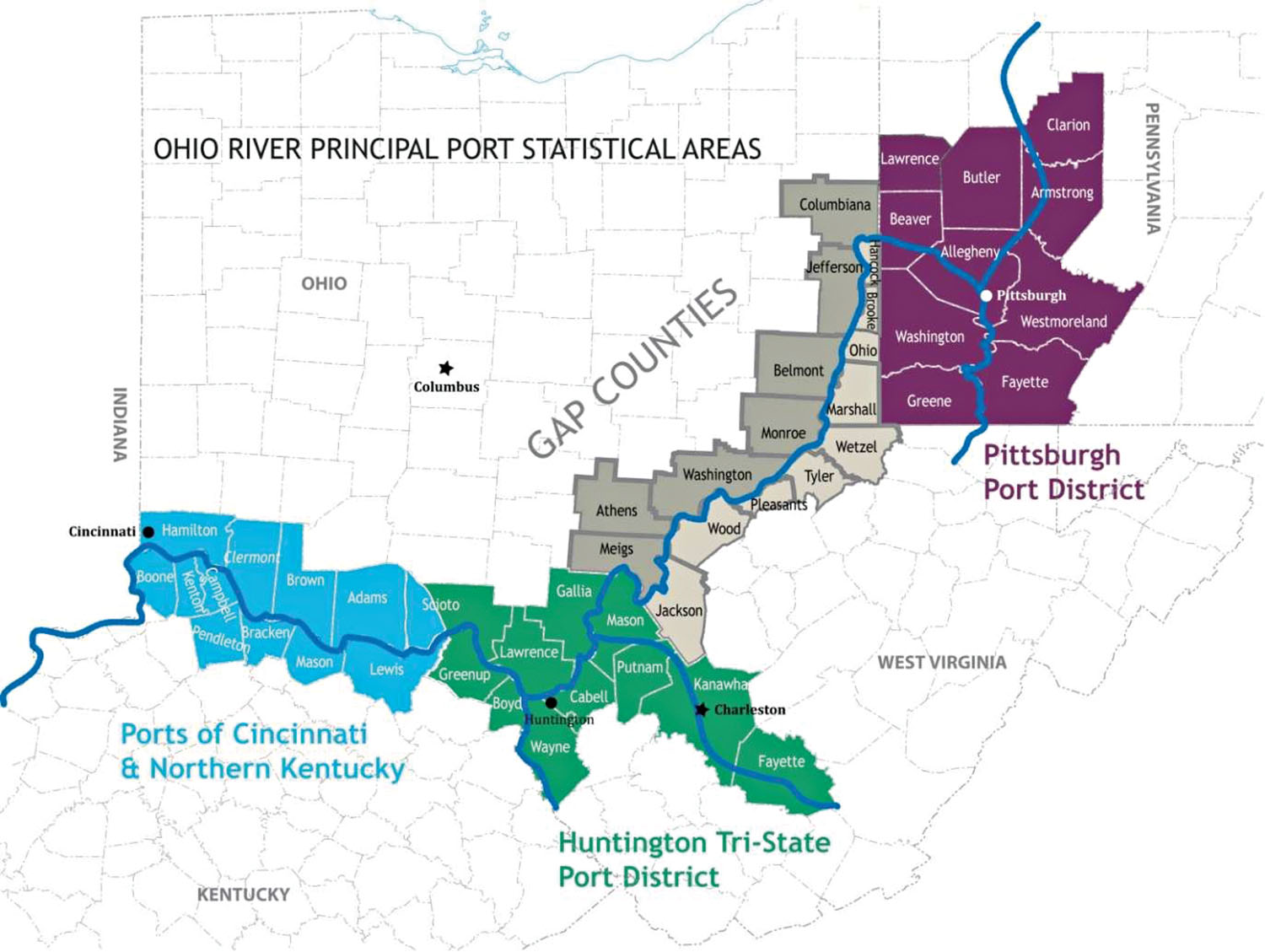 A new statistical port district that could become the largest inland port in the United States by freight tonnage has received preliminary approval but awaits a final review.

The Mid-Ohio Valley Port District is planned to encompass nearly 220 miles of the Ohio River between Mile 40.0 and Mile 256.8, filling in a gap between the Huntington Tri-State Port District and the Pittsburgh Port District. It encompasses parts of seven counties in Ohio and nine counties in West Virginia.

The port district has been preliminarily approved by the Institute for Water Resources. The institute is the Corps of Engineers’ center of expertise for hydraulic and hydrologic modeling, dam and levee safety, integrated water resources management, collaborative planning and environmental conflict resolution and the collection, management and dissemination of Civil Works and navigation information, including the nation’s waterborne commerce data.

The preliminary approval allowed the port to be added to the Corps’ Waterborne Commerce Statistics Center database as of February. That ensures accurate collecting and reporting of waterborne commerce data along the specified corridor of the Ohio River.

The port district still must be formally approved by the Corps’ command staff in Washington, D.C., said Mark Locker, project manager for freight, maritime and logistics with the Ohio Department of Transportation’s Office of Statewide Planning and Research.

Contractor W.R. Coles of Nashville, Tenn., said based on others’ experiences that could potentially take as little as a few weeks, although it also could stretch longer.

A study undertaken as part of the application for the district showed that as of 2018, the counties included in the proposed port district shipped 47.8 million tons of waterborne commerce. If those figures stay about the same, that would make the Mid-Ohio Valley Port District the largest inland port in the country by freight tonnage. In comparison, 2019 waterborne commerce data from the Corps of Engineers showed the top two inland river ports as the Port of Huntington Tri-State with 36.8 million tons and the Ports of Cincinnati and Northern Kentucky with 36.6 million tons. Some of the main cargoes hauled through the area are petrochemicals, plastics, chemicals and general cargo, including steel coils. Although coal continues to make up a significant portion of the cargoes, it continues to trend downward, as it does across the entire region.

He noted that a statistical port does not require any facilities to be built, nor is it an additional level of government oversight.

“It’s not another layer of someone telling them how to run their ports and terminals,” Locker said. “It’s just a statistical area that allows the Corps to assign the data they already collect.”

Specifically, a statistical port district allows waterborne freight data already collected to be assigned to a designated portion of the waterway. It can be useful for economic development and marketing purposes as well as helping to ensure accurate data calculations from the Corps of Engineers. Developers previously have said they believe the port designation could be a catalyst in helping the region receive funding for antiquated infrastructure, including locks and dams, as well as developing regional and state associations for river commerce.

The Ohio River is already home to three statistical ports: Pittsburgh,  Huntington Tri-State and the Ports of Cincinnati and Northern Kentucky. The former Port of Greater Cincinnati Development Authority and the Northern Kentucky Port Authority petitioned for their redesignation as a combined port district in 2012, and that designation was approved in 2015. It ultimately used the statistical port district to capture data useful in being named as a federal Marine Highway route, making companies along the route eligible for federal grant projects, including a short-haul project for steel coils awarded in 2020.

Although other ports have expanded their footprints or combined to form statistical port districts, Locker said it the first time in the region and possibly in the entire country that a new statistical port has been created without using any portion of a previously existing port’s district.

The idea for the new port district sprang from a statewide maritime study the Ohio Department of Transportation conducted to develop its strategy moving forward.

“As we were examining the Ohio River, it became apparent that there needed to be a statistical port to fill the gap between Huntington Tri-State and the Ports of Pittsburgh,” Locker said.

W.R. Coles & Associates, as contractor, took charge of the project, holding meetings with stakeholders from both private and public entities and gathering resolutions and letters of support from government bodies and their representatives at all levels from throughout the proposed district. The contractor submitted the application to the Corps last fall for consideration.

Mike Paprocki, executive director of the Brooke-Hancock-Jefferson Metropolitan Planning Commission, which helps plan transportation priorities for the represented counties, said he believes the statistical port district could be an important part of improving the economic potential of the Appalachian region, where coal mining used to be a major source of incomes for families.

“When you look at the tonnage nationally, because of the decline of the use of coal, we’re seeing tonnage go down, but we’re still seeing a fair amount of traffic,” he said. “We’re starting to see more of the other commodities going up and down the river: oil and shale; scrap steel; fertilizers from agriculture.”

The port district could help economic development officials get a much better understanding of what products are moving through the region, which assists in targeting industries that might be interested in relocating or expanding into it, he said.

“Really, what we want to use this for is an awareness of what goes on on the river,” he said.

He continued, “These are Appalachian counties, and we’ve been associated with the coal industry, but  we’re becoming more of an economic value. We’re starting to see the beginnings of a new generation, of a new economic engine for this area.”