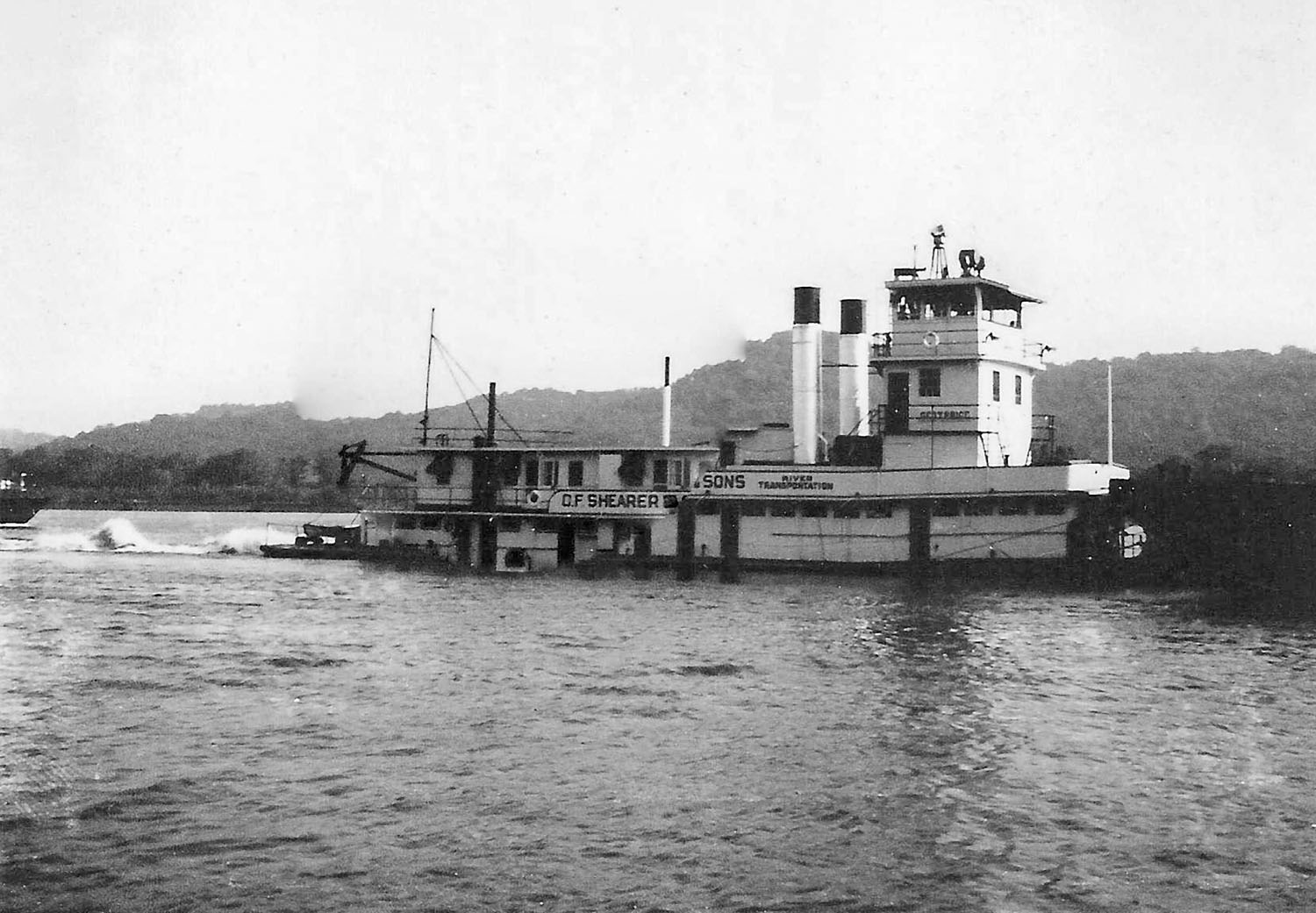 The Geo. T. Price Was The First Diesel Line-Haul Towboat

The Charles Ward Engineering Works, Charleston, W.Va., was a pioneer in the advent of the screw propeller as a means of providing thrust to towing vessels. The James Rumsey, built by Ward in 1903 as a 350 hp. steam, single-screw towboat for the U.S. Engineer Department, created a lot of attention with a celebrated shoving contest against the steam sternwheel D.T. Lane of the Campbells Creek Coal Company, which had similar horsepower rating. The winner of the contest was debated by rivermen for years, and it was judged to be an even draw by most, though many felt the Rumsey was the victor.

Ward went on to build several more steam prop boats, advancing from single- to twin-screw in vessels such as the A.M. Scott in 1906, which actually began life as a pleasure boat and entered the towing ranks for the Kansas City & Missouri River Navigation Company in 1911; the Inspector in 1915, again for the U.S. Engineer Department; and the Clairton (later renamed Kanawha, Alecia, Henry A. Roemer and J.M. Leithead), built in 1918 for Carnegie Steel and later owned by Hillman Transportation Company.

In 1925, Ward launched a twin-screw diesel towboat designed to compete with sternwheel steamboats in line-haul towing service. This was the Geo. T. Price, built for the fledgling W.C. Kelly Barge Line, of Charleston. The Price was 126 by 26 feet, with a 7-foot hull depth. Power was from a pair of Fairbanks-Morse direct-drive diesels totaling 720 hp. In the pilothouse was found the usual settee (or Lazy Bench), the traditional heating source of the day in the form of a pot-bellied stove, and both a pilotwheel and steering levers to control the “Ward Patented Rudder System.”

This system consisted of three rudders abreast at the stern, one outboard of each propeller, and one located between the props, and an additional rudder forward of the center one. In photos taken during construction, these rudders appear to be fabricated of wood. (I would love to know if this system was ever converted to what we know today as traditional steering and flanking rudders. I can’t help but believe that they must have been.)

An external cabin on the roof behind the stacks was set up as quarters for the vessel master.

The Kelly name was well known for the Kelly Axe & Tool Company, located in Charleston, one of the largest axe manufacturers in the country at the time. George T. Price was vice president of that concern. According to Jim Swift in his Backing Hard Into River History, W.C. Kelly Barge Line was formed and bid for common carrier rights on the Ohio and Mississippi rivers in the early 1920s. In addition to the Price, Ward had built the diesel sternwheel W.C. Kelly for the company in 1923, and in 1927 he built a near duplicate to the Price named W.A. Shepard, as well as the large diesel sternwheel Duncan Bruce. Several 500-ton covered cargo barges had also been constructed.

Business must have been slow for Kelly Barge Line, as a photo from the era shows all the Kelly boats, with the exception of the small W.C. Kelly, tied up at the Ward facility. Swift makes mention in Backing Hard that the Price, Shepard and Bruce in 1927 attempted to shove a tow up the Ohio to Glassport, Pa., on the Monongahela, but they were unable to complete the trip due to low water.

In 1937, ABL repowered the Price with a pair of National Superior diesels totaling 1,600 hp., more than doubling its original power. ABL contracted to tow cotton on the Lower Mississippi River, and a second pilothouse was placed atop the original for added visibility, with the stacks being extended several feet as well. Comparing photos, it is obvious that the original pilothouse had also been raised several feet since the boat’s launch in 1925. At some point, the small cabin on the roof was expanded to add accommodations. These additions appeared to be of wooden construction.

The Price continued in ABL service until sold to O.F. Shearer & Sons in 1946. In 1966, it was sold to River Transportation Company, Point Pleasant, W.Va., one of the concerns headed by Capt. Robert H. Bosworth. In 1969, the floating stock of these companies (Bulk Towing, Elk Towing, Point Towing, River Transportation, R.E. & E. Corporation) was transferred to M/G Transport. Not long after this sale, G&C Towing was formed, also based in Point Pleasant, and Capt. Bosworth was a presence in that company. Several of the boats he had owned in the previous companies were purchased from M/G by G&C, including the Jefferson, Alan R. Merrill and Geo. T. Price.

The Price disappears from the listings in the Inland River Record after 1970, and it was never listed as owned by G&C. For some reason the boat’s name, which had always appeared as “Geo.” on the boat and in the IRR listings, began appearing as “George” after the 1968 issue. I don’t think that G&C ever operated the Price after acquiring it, but the vessel eventually became the headwire boat for the company’s main fleet at Henderson, W.Va.

Aboard The Geo. T. Price

Capt. M.G. “Tom” Herdman once told me about the first time he was on the Price while it was owned by Shearer. He got aboard late at night, and the captain had been up for many hours since the previous pilot had left the vessel (no 12-hour rule in those days). Tom went to the pilothouse and after telling him he was glad to see him, the captain took off to bed. Tom’s eyes hadn’t adjusted to the dark, and as the tow began to swing, he reached for the steering levers and couldn’t find them. He pulled the engines back, managed to find the whistle pull and blew for the mate. The mate came up, turned the pilothouse light on, and Tom could then see that the boat had electric steering, utilizing small switches rather than the usual long metal steering levers.

Capt. Gerald “Jerry” Boggs was another who worked aboard this boat, standing some of his first pilot watches aboard it after O.F. Shearer sold it to the Bosworth concerns. This was near the end of its operational career, and Jerry related that there were frequent engine breakdowns. Capt. Boggs went on later to work for O.F. Shearer and retired from Shearer’s successor, AEP River Transportation. AEP named the 5,600 hp. Capt. Gerald Boggs in his honor shortly before he retired.

Capt. Bill Judd, New Richmond, Ohio, related that as a boy he would often catch boats as they passed through the area, sometimes riding to the next lock where he would get a ride back on another boat or have someone drive to pick him up. The Price was one such boat, and he was aboard it many times. The photo of the Price underway was taken by him in the vicinity of Seven Mile Creek, about Mile 458 Ohio River.

I never personally witnessed the Price in operation, but I once wandered all over it while it was serving as the headwire boat for G&C. By this time its second, upper pilothouse and the upper cabin on the roof had been removed. The boat was dismantled for the most part, but the Superior engines were still in place in the engineroom, stripped of most accessories such as heads, pumps, etc. G&C at this time was operating the Duncan Bruce, which was powered with the same engines, and one can surmise that these parts were utilized in the boat’s continued operation.

A few years after I had strolled its decks, the Price was beached out on Gallipolis Island during a high-water event and scrapped by the M.T. Epling Company: an unceremonious end to a boat that had been a vanguard in diesel-powered linehaul towing operations.