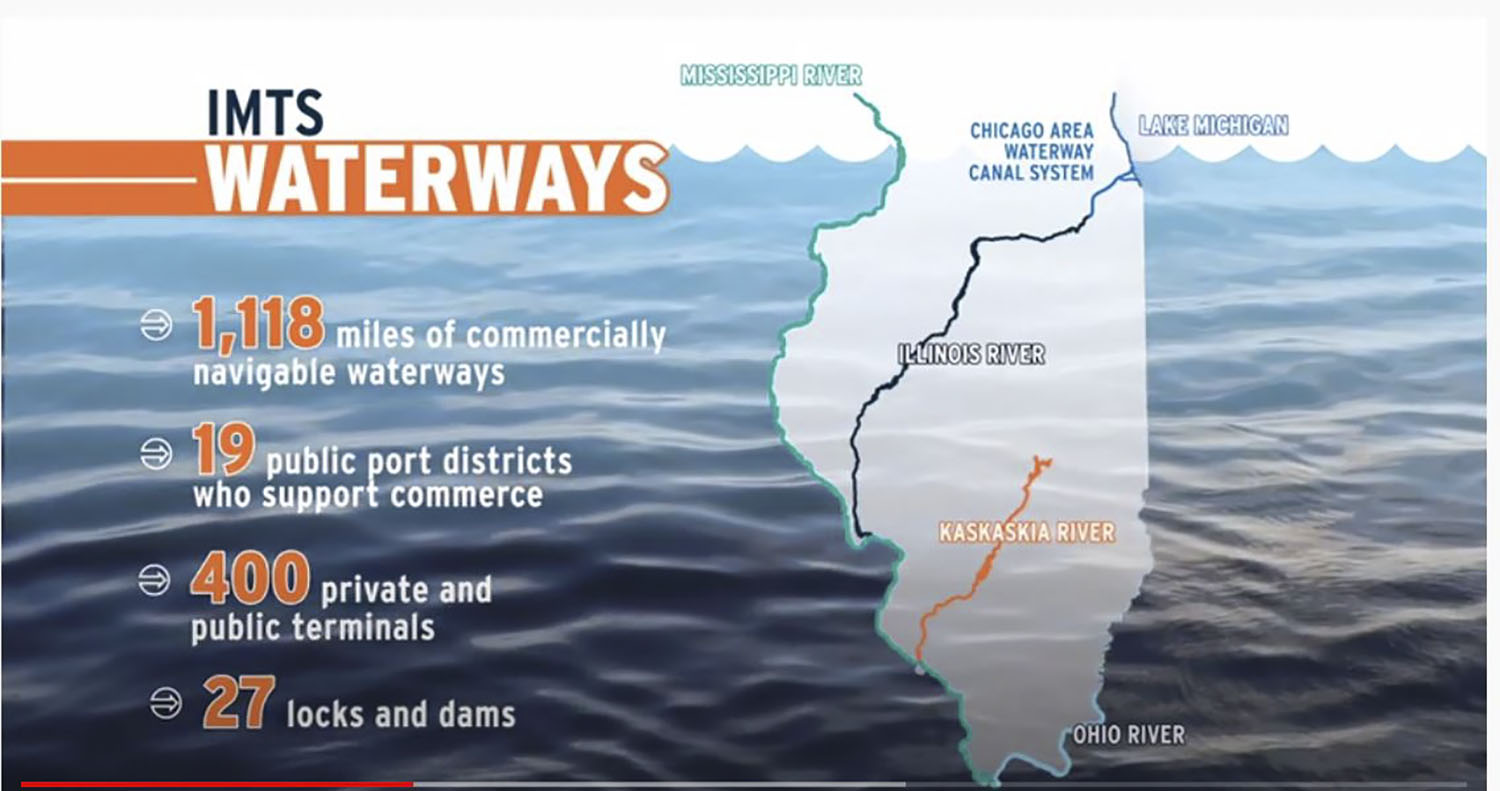 A newly released study shows the amount and direction of waterborne freight in Illinois and helps to quantify its economic impact as well as giving recommendations for how the state can better invest to promote economic development.

The Illinois Department of Transportation (IDOT) finalized the Illinois Marine Transportation System (IMTS) Plan and Economic Impact Analysis Study and published it on its website in March after a two-year study period. The 202-page plan includes a profile of each of the state’s 19 public port districts as well as eight key recommendations for moving forward. It is available at https://idot.illinois.gov/transportation-system/transportation-management/planning/index under the “marine” tab.

The plan found the marine transportation industry supports 166,000 jobs in Illinois and contributes $36 billion to the state’s economy, accounting for 4 percent of Illinois’ gross state product.

One of the plan’s purposes was to help IDOT integrate the waterway system into the state’s overall multimodal transportation network.

Another purpose of the plan is to help determine where the state should invest $150 million over six years in funding identified for improvements to the marine transportation system in the Rebuild Illinois capital plan. The plan was approved by legislators in 2019 and funded, in part, by the state doubling its fuel tax rate in 2019 and then increasing it again slightly in 2020.

Already, $40 million from the Rebuild Illinois plan has been allocated to build the Alexander-Cairo Port District near the confluence of the Mississippi and Ohio rivers in the state’s southernmost city of Cairo.

In addition to analyzing data, reports and academic papers, plan authors also conducted numerous interviews with port officials, terminal operators, businesses and other stakeholders. Its steering committee was made up of a cross section of public, private and industry organizations that have a vested interest in Illinois’ waterway system.

Illinois has one of the largest multimodal freight transportation networks in the country.

“However, one of the most important elements of the system has often been overlooked: the waterway system,” the plan’s introduction said. “The IMTS links the state of Illinois with the Atlantic Ocean via the Great Lakes and the St. Lawrence Seaway and with the Gulf of Mexico via the Mississippi River. This gives Illinois farmers, manufacturers and businesses access to international and interstate markets. The system is vital to the state’s economy, transporting 90.6 million tons of goods, or 9 percent of Illinois’ freight tonnage in 2017. Barges flow up and down the Mississippi, Illinois, Ohio and Kaskaskia rivers, as well as through the Chicago Area Waterway System and Lake Michigan, providing an affordable, efficient and clean means of transporting goods.”

Of goods moving through Illinois’ waterway system, 22 percent is inbound and 69 percent is outbound, with an additional 9 percent moving within the state, the study found. Food and food products account for 40 percent of total freight movements, most of which are exports. The Illinois Department of Agriculture reported that leading commodities produced in Illinois are soybeans, corn, pigs, cattle, wheat and oats.

Although the second largest commodity shipped is coal, with nearly 10 million tons shipped annually, almost all for export, that amount is expected to significantly decrease in coming years. A small but growing sector is primary metal products, including pig iron and metal bars. Those products are projected to have 60 percent outbound growth and 122 percent inbound growth by 2045.

Although 1,500 miles of Lake Michigan are under Illinois jurisdiction, including 63 miles of coastline, freight activity is not as prevalent as it used to be. It is now limited to Waukegan Harbor at the northern end of the coastline and Calumet Harbor at the southern end. Freight moving in and around Chicago moves through the six separate waterways that make up the Chicago area waterway system. They are: the Chicago and Des Plaines rivers, Chicago Sanitary and Ship Canal, the Calumet Sag Canal and the Little Calumet and Calumet rivers. These waterways, together, account for 90 miles of commercial navigation.

Overall, the plan says that the state’s marine transportation system presents opportunities for fuel-efficient movement of goods, with an average, 15-barge tow moving the equivalent of 216 railcars on six locomotives or 1,050 large semi tractor-trailers. It says the system is particularly useful for moving bulk commodities, such as food products, gravel, chemicals and fertilizers. It also notes that transporting products on the waterways helps to mitigate highway congestion.

“Compared with a representative set of peer states and neighboring states, Illinois performs comparably well in many metrics,” the plan’s authors state. “However, in certain areas—primarily related to organizational structure, funding, and dredging activities—there are opportunities for improvements to make Illinois more competitive. Critical IMTS needs exist with respect to: port development; waterway maintenance and operations; and statewide planning and funding.”

One of the plan’s recommendations is to re-establish a marine section within IDOT.

“This will provide better support for marine system planning and IMTS stakeholders, elevate awareness of the IMTS as part of the state’s multimodal transportation system, provide a voice for the infrastructure needs of the IMTS and position IDOT to provide effective leadership on IMTS issues,” the plan states.

Plan authors said IDOT should fully integrate its transportation planning to include planning for the IMTS.

“Additionally, IDOT should coordinate internally and with external partners to make sure other modal investments that impact the IMTS are done so in a manner that minimizes potential negative impacts on the IMTS, or in a manner that complements the IMTS,” the plan noted.

One way it suggests doing so is by establishing a state-level marine transportation system advisory board, to include both public agencies and private sector partners. The board would coordinate with the Illinois State Freight Advisory Committee as well as private sector stakeholder groups and associations.

IDOT should streamline the dredging process, taking a lead role in “addressing known deficiencies in the state’s process for port activity permitting, dredging and beneficial use of dredged materials to improve the efficiency and performance of the IMTS and remedy Illinois’ competitiveness with neighboring states,” the plan says.

Further, it recommends that IDOT work with federal regulatory agencies to establish consistency between improved state practices and federal practices to the extent practical. Along with strengthening federal relationships, IDOT should also facilitate multistate partnerships to achieve joint objectives.

Among other suggestions, the plan suggests that IDOT: encourage the Corps of Engineers to develop and regularly publish a five-year program of planned activities and timelines potentially impacting IMTS stakeholders; seek opportunities to accelerate or facilitate federal program delivery through state participation in administration, contracting or other means; work with U.S. Department of Transportation partners to make IMTS projects as competitive as possible for discretionary grant awards; and collaborate with federal regulatory agencies and public and private ports to review permitting regulations for efficiencies and economic competitiveness related to activities undertaken by ports to improve the movement of goods and increase economic competitiveness.

The state should also leverage existing state funding to meet its waterway needs, according to the plan.

“Many partners and stakeholders expressed concern regarding the condition of the existing IMTS infrastructure,” the plan notes. “IDOT should continue to leverage existing Illinois funding sources to invest in IMTS improvements, to the extent practical. These existing funding sources should include all modes and types of sources including for rail, roadway and other landside infrastructure.”

The state should also more fully explore the potential for public-private partnerships, especially when available public funding is not sufficient to provide safe, efficient or reliable marine transportation, the plan said.

The final recommendation was to establish a long-term, sustainable IMTS funding program.

“Building on the Port Capital Grant Improvement Program, IDOT should work to design and establish a long-term, predictable and secure funding program for the improvement of existing IMTS infrastructure and expansion of the system,” the plans states.

That could include continuing the grant program as well as re-establishing the state’s Port Revolving Loan Fund to support short-term port and IMTS investment needs, such as local matches to discretionary grants or quick-response expenditures.

“The benefits—considering only benefits to the state of Illinois—of implementing these programmatic recommendations can be evaluated and quantified on three dimensions: avoided loss of economic value; avoided impacts of freight transportation on other modes; and accommodation of future statewide business expansion and growth,” the plan said.

Not implementing them, the authors warned, could potentially devastate the economy. The plan noted that direct water-related benefits, including 3,800 jobs and $539 million in added value, would be most immediately at risk if activity along the IMTS were to decline. Close behind, it said, would be direct port user benefits, including 59,000 jobs and $6.2 billion in added value.

“For port users, their jobs and value-added contributions could be significantly impacted if marine transportation services had to be replaced by truck and rail services, which can be substantially more expensive,” the plan said. “In the best case, their costs for transportation spending would increase, impacting their bottom-line and reducing their ability to spend on labor, capital expansion, maintenance and/or shareholder returns, but they would continue to operate. In the worst case, the cost impacts would be so severe that the businesses could not operate profitably in Illinois and would have to seek locations in other states or close entirely.”