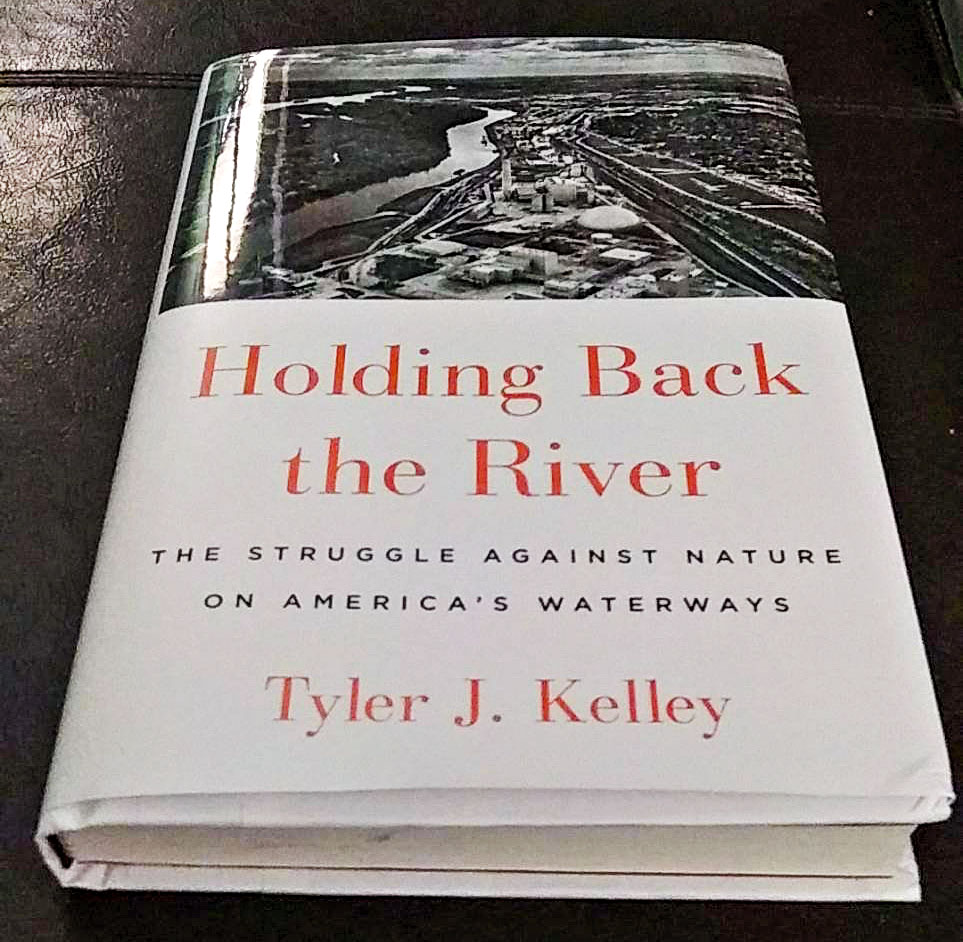 Book Review: Holding Back The River By Tyler Kelley

Tyler Kelley’s book Holding Back the River, to be officially published May 4, belongs in the fine tradition of nonfiction works like Rising Tide, John Barry’s award-winning account of the great Mississippi river flood of 1927, and John McPhee’s 1973 The Control of Nature, which includes a famous chapter on efforts to tame the Atchafalaya River. (Barry calls Kelley’s book “an insightful and important examination of our policy toward rivers.”) Like those previous books, much of this one first appeared as articles in various publications, including the New York Times, Wall Street Journal and New Yorker. Like them, it focuses public attention on too-often-neglected issues of waterways management with absorbing and accessible writing.

Kelley reports that after a chance encounter with a lockmaster while boating, “I had glimpsed a world, and I couldn’t stop thinking about it.” The result was six years devoted to a book with a basin-wide approach to the Mississippi River and its main tributaries. Readers of The Waterways Journal will enjoy Kelley’s empathetic and detailed accounts of life aboard the last of the old-fashioned wicket boats at Lock and Dams 52 and 53 on the Ohio River, now superseded by the completion of Olmsted Lock and Dam, which Kelley also covers in the section called “Lock.”

The section “Alluvial Empire” anchors its discussion of river policy on the Lower Mississippi River around the decision in 2018 by the Corps of Engineers to blow the “fuseplug” levees at three points on Birds Point-New Madrid to relieve floodwater pressures on the Mississippi River that year. The decision was controversial at the time and remains so since, even though the rural landowners in the affected area knew they lived in a flood easement zone, for which they or their ancestors had been paid by the federal government against the possibility of just such an eventuality. Kelley skillfully ranges back over the history of the events and policies that led up to that moment, including the 1927 Mississippi River flood, the 1937 Ohio River flood and efforts to prevent any repeats of those disasters.

The third section, “Rivers of Earth,” discusses the Missouri River’s contribution to the Mississippi River system, focusing on sediment. Too much of it is building up behind the Upper Missouri River dams, Kelley contends, and not enough is reaching the Lower Mississippi River to keep building out the delta, as it was doing for millennia before human beings interfered with upstream dams, cutoffs and flood control projects. The result is the erosion of the Louisiana coastline and debates about allowing Mississippi River water to divert through various engineered channels to build it up again. If humans hadn’t intervened, the Mississippi River would likely have diverted its main channel to the Atchafalaya River by now and begun a new delta.

Kelley is an astute and careful writer who sticks close to the history and the facts and allows his informants to make their cases on particular river management issues. Some of these informants have strong views on what the Corps of Engineers did or didn’t do or should have done, including some former Corps officials.

At the end of his book, Kelley points to the experience of The Netherlands, whose leaders were horrified and galvanized by Hurricane Katrina. The Netherlands has lived mostly below sea level for centuries, and is home to some of the world’s leaders in flood control technology. After a devastating flood in 1953, Dutch leaders had already revamped their flood control systems once. After Katrina, they reimagined their approach to flood control, convinced the public of its benefits and got willing assent to its increased costs. Taxes were raised, levees reconfigured, some land abandoned, and flood control agencies were consolidated and centralized.

Besides being well-written and offering a basinwide understanding of water-management issues affecting the Mississippi River, Kelley’s book is especially timely as Congress debates another huge infrastructure bill, a debate that could last all summer.

Kelley thinks the U.S. needs Dutch foresight. “Before America rebuilds, America needs to rethink its infrastructure ideology. Without long-term planning—liberated from politics, special interests and old assumptions—a new New Deal (or a Green New Deal) will be a colossal waste of resources.” This rethinking is not something the Corps can do on its own. It would require a widespread public debate, action by Congress and a revamping of the Corps’ authorities.

Even readers who may not agree with all of Kelley’s informants will be much better equipped to follow this debate, at least as it relates to waterways issues, by enjoying his insightful, provocative book.