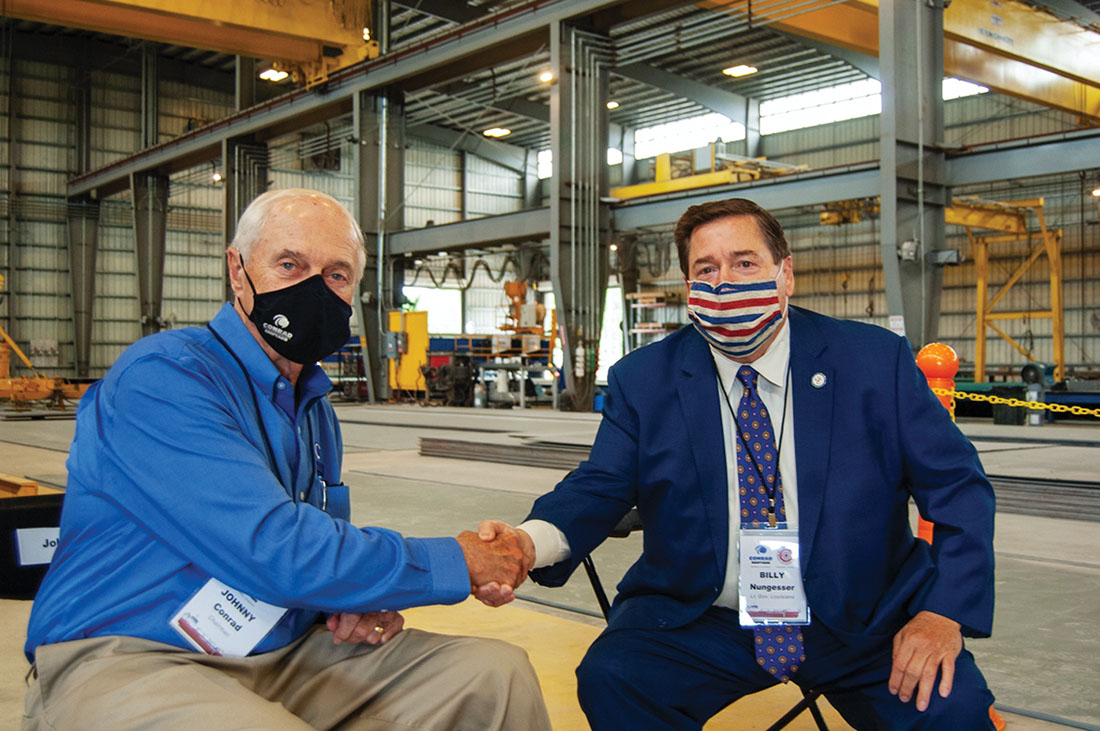 Attending the ceremony were executives from Conrad and Great Lakes, shipyard workers and other guests, representatives from the U.S. Coast Guard and Louisiana Lt. Gov. Billy Nungesser. Addressing the crowd, Conrad Chairman and CEO Johnny Conrad said the ceremonial keel laying is just one of many milestones Great Lakes and the shipyard have shared through the years.

“Our valued relationship began more than 35 years ago, and in that time, we have worked together on several projects, including deck barges, anchor barges and dredge support equipment,” Conrad said. “In addition to those new construction projects, we have done repair and conversion work for GLDD, including the dredge Alaska, which is in our shipyard now for repairs. It is our honor to build this vessel for you.”

Plans call for the dredge to measure 346 feet by 69 feet and be outfitted with two 800 mm. suction pipes capable of working in depths up to 100 feet. The vessel will be able to pump material ashore for renourishment work and will also be equipped with dynamic positioning and tracking, EPA Tier 4 engines totaling 16,500 hp., dredging system automation and features to minimize the environmental impact of dredging. Crew accommodations will include single-occupancy staterooms, a workout room and a movie theater that will double as training space.

Conrad expects to deliver the dredge before the end of the second quarter of 2023.

“I would like to thank Great Lakes Dredge & Dock for the confidence and trust that you showed in awarding us this project,” Conrad said. “Your recognition that ‘your workforce is the reason for your success’ aligns well with Conrad corporate values. I’ve heard my father and our founder, Parker Conrad, say that exact same thing many, many times. It was one of his founding principles.”

Speaking at the ceremony, GLDD Senior Vice President of Government Relations and Business Development Bill Hanson pointed to his company’s long history at work along the Louisiana coast, a history that stretches back more than 80 years. He also highlighted Conrad Shipyard’s workforce and recognized Nungesser’s long support for the dredging industry and coastal restoration, first as president of Plaquemines Parish and now as lieutenant governor. Nungesser, widely expected to run for governor in Louisiana in 2023, pledged his continued support for coastal restoration efforts and channel maintenance throughout the state.

The keel laying at Conrad’s Amelia shipyard came just a few days before Great Lakes was awarded a $53.9 million fixed-price contract with the Mobile Engineer District to deepen and widen Mobile Harbor. Work for the contract is expected to be completed by October 2022. The contract is part of the $365 million project to widen Mobile Harbor and deepen the channel to 50 feet.