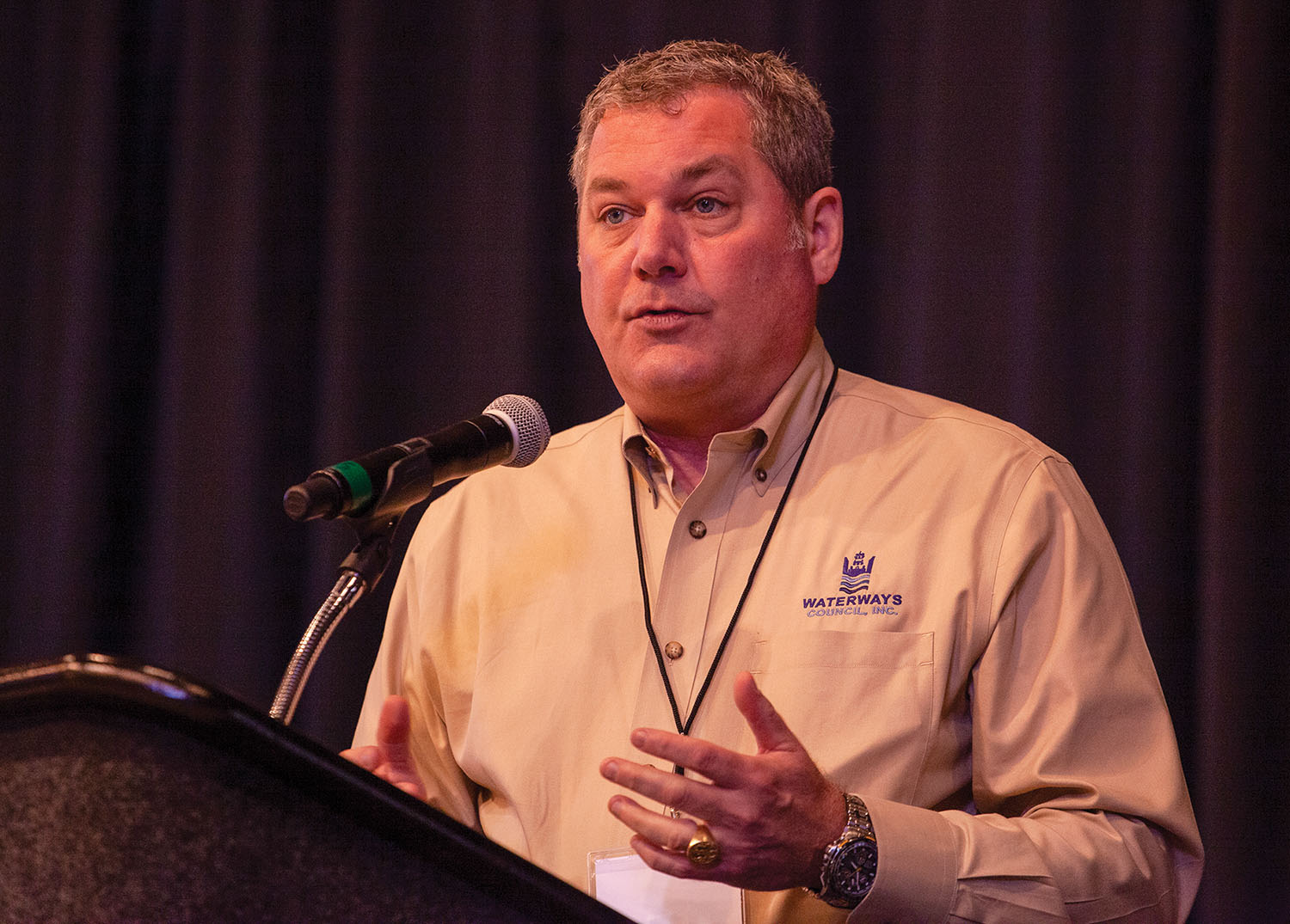 Repair or replacement of locks and dams along America’s inland waterway system is key to the system’s future, Paul Rohde said during the Inland Marine Expo’s session “Infrastructure Report: Projects And The Need For Investment To Critical Infrastructure.”

Rohde, vice president of the Midwest Region of Waterways Council Inc., hosted a panel discussion on the topic during the annual exposition and trade show, held May 24-26 at the Dome at America’s Center in St. Louis, Mo.

Joining him were Col. Louis A. Dell’Orco III, chief of operations, regulatory and readiness at the St. Louis Engineer District; Mike Steenhoek, executive director of the Soy Transportation Coalition; and David Loomes, vice president of sales and supply chain at Continental Cement.

Each panelist brought a different perspective to the topic, while all agreed that investment is necessary to upgrade and maintain infrastructure.

Rohde took a look at federal government infrastructure package plans, which include President Joe Biden’s “skinny” budget, a proposed Republican party budget and a third budget proposal from a group called the Problem Solvers Caucus. All three include funds for the inland waterway system.

“The good news is inland waterways are in there,” Rohde said.

While the president’s plan includes $17 billion to be split among inland waterways, coastal ports, the healthy ports initiative, ports of entry and ferries, the GOP plan splits the $17 billion only two ways: inland waterways and ports. The third plan doesn’t include a dollar amount, but says, “Building on the Water Resources Development Act of 2020, federal investments should continue to be strengthened in our inland waterways, as well as underserved and emerging harbors.”

Hope of a bipartisan infrastructure bill is beginning to fade, Rohde said, and it is increasingly also likely that an appropriations package will not be ready by September 30, making it likely for at least one continuing resolution to allow continued funding of the government.

When funding does become available, “The good news is we in our industry have our ducks in a row,” Rohde said.

That is in part of a prioritization of projects that have been previously authorized to determine how funding should be spent. The Inland Waterways Users Board released its updated prioritization as part of its December 2020 report.

Dell’Orco looked at major lock outages from 2012–2020, determining there was one failure requiring an emergency closure every 2.5 months for a total of 560 days of closures and an economic impact of $600 million.

As each emergency closure affects planned maintenance and other closures up and down the river, “It’s a cumulative effect that just keeps growing,” Dell’Orco said.

Although replacing the locks is ultimately necessary, the Corps is taking the initiative. That includes increasing the commonality of components and using standard designs when possible, validating backlog maintenance lists and revisiting capital investment strategy with industries.

“We want to be available to execute if funds become available in any form or fashion,” he said.

Dredging is what Dell’Orco called “the current friction point,” adding that the dredging fleet is aging, needs to be modernized/augmented with more power and that it needs flexibility to enable a systemic long term channel plan. Regional opportunities exist for the Corps’ most efficient dredges, he said.

In the meantime, improved communication of channel conditions via a weekly channel report and improved usage of GIS and websites has been key, he said, along with good river level forecasting. The Corps also maintains a five-year rolling data review and modeling of “hot spot” and “chronic” dredging needs to reduce the frequency of problems and improve the quality and availability of data to try to prevent grounding of vessels.

“We’re partners in this,” he said. “It’s in everybody’s business to look toward the shared vision and determine the total program using a regional approach so you get the smartest, biggest bang for your buck when you do the repairs and produce solid data points for how we’re going to address things in the future.”

Steenhoek, who participated virtually from Iowa over a video screen, spoke about soybeans being the country’s largest agricultural export, with 61 percent of soybeans and 59 percent of corn being exported through the port in New Orleans, La.

“Clearly the status of locks and dams is a major priority for our industry,” he said.

One of the initiatives he is most excited about is a project deepening the Lower Mississippi from 45 to 50 feet between the Gulf of Mexico and Baton Rouge, providing deep draft access to the ports of Plaquemines, New Orleans, South Louisiana and Baton Rouge. That $245 million project was approved July 31, with deepening started September 11. The first phase, from Venice, La., (approximately Mile 10 above Head of Passes) to the Gulf of Mexico is now more than 90 percent complete, and that phase should be finished sometime in the fall, he said.

Another initiative showing promise is the greater utilization of the Missouri River, he said. A continuing issue has been that the federal government does not want to invest funds into maintaining and improving the river without more users, and users don’t want to spend their resources on locating along the Missouri without the promise of federal dollars maintaining and improving it.

“We’re happy to see progress being made on the Missouri,” Steenhoek said.

“It’s the way we operate, and the way it keeps us competitive in those markets is the river,” Loomes said.

However, he said, Continental has estimated disruptions along the system, including lock closures, have cost the company $12 million over the past two years.

That has in turn affected customers in other industries, including construction, that have then had costly disruptions of their own, Loomes said, adding, “That’s the kind of disruption that occurs when we don’t have the investments needed in the infrastructure.”