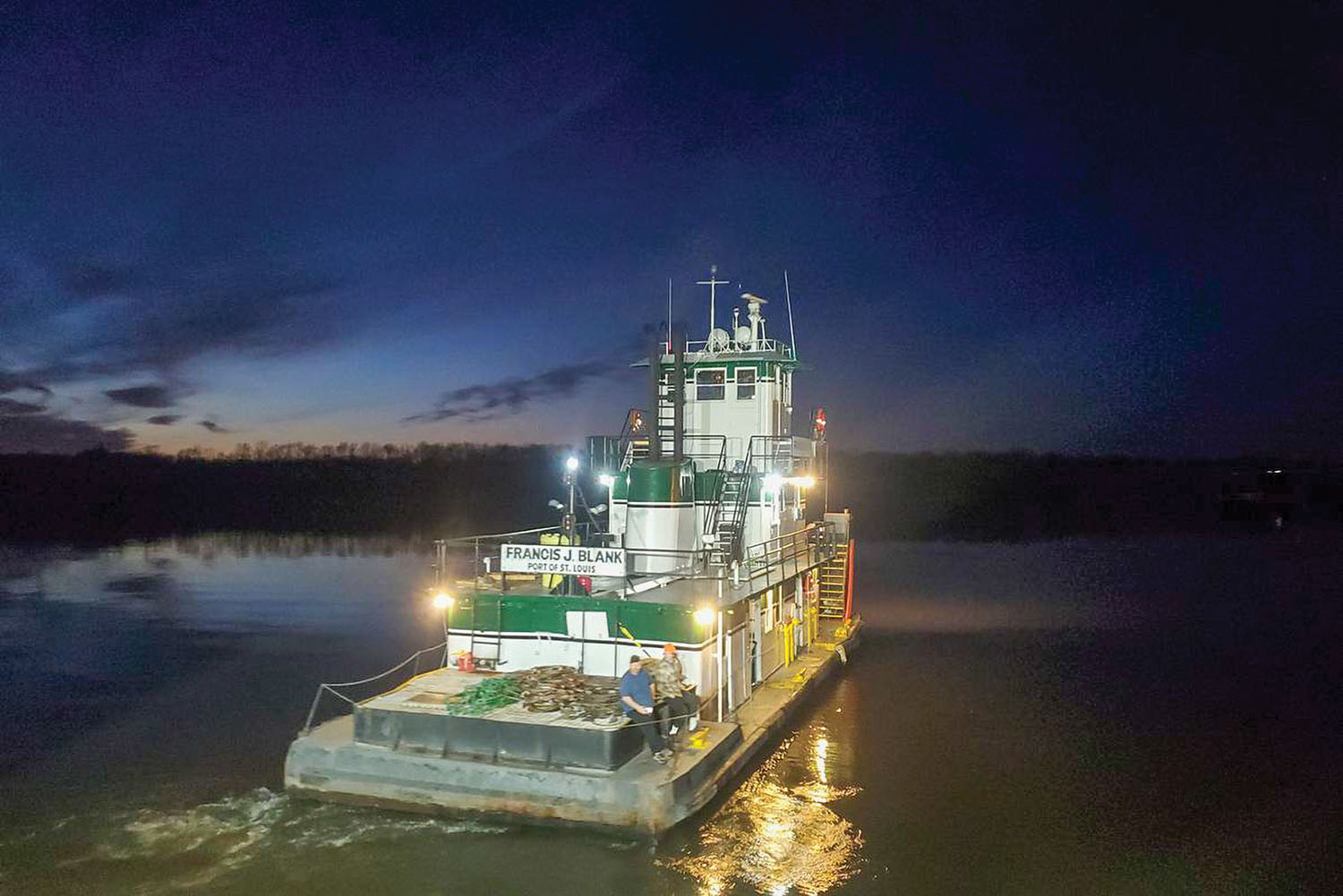 Riverview Tug Service, based in Bellevue, Iowa, at Mile 557 on the Upper Mississippi River, purchased the mv. Francis J. Blank from Blank River Services in Elizabeth, Pa. last year. The lock-assist vessel finished the 2020 season working at Lock and Dam 6, said owner Jeremy Putnam, and is currently undergoing extensive rehab at LD Marine LLC, a shipyard in Amelia, La. It is a 65-foot, 1,200 hp. towboat built in 1966.

“We saw the vessel for sale in The Waterways Journal,” said Putnam, “and had our 18-year-old son, Alex, contact Blank River Service to negotiate the purchase of the vessel.”

Putnam said the Blank family loved the fact that the vessel was going to a family-run business like their own. “The office manager from Blank called and congratulated me on how mature and well-organized our son was,” Putnam said. “She was surprised when some young kid showed up at their facility and wanted to look at a boat for sale.” Alex’s biggest challenge was finding appliances and beds during COVID-19, said his father, and stocking the vessel for the two-week trip back to Lock 6. “Stores were limiting purchases of bread to one loaf and toilet paper to one package,” he said.

LD Marine stripped the vessel to bare steel and is restoring it. When completed, the “brand new” boat will return to service in the spring of 2022, Putnam said.

Also last year, Riverview purchased the mv. Rachel Shannon, a 65-foot, 1,260 hp. towboat built in 1967, from LD Marine. “We looked at the boat probably five or six years ago,” Putnam recalled. “We drove it, and although it wasn’t what we were looking for at the time, I always liked it.”

When he saw it one time at LD Marine, waiting to be scrapped, he felt he could save it. “The Rachel still has lots of life left,” he thought. “We’re into it a bit deeper than we planned,” said Putnam, “but we are moving on with repairs. We cut the bow off and are completely replacing about 20 feet of the vessel. We are in the process of redoing the rest of the hull and completely refurbishing it, like the Francis,” he said.

Riverview renamed the Rachel Shannon the mv. Capt. Linh after Linh Nguyen, the owner and operator of LD Marine. “I have been doing our re-hulls and overhauls there for the last 4 or 5 years,” said Putnam, adding he has grown close to the Nguyen family.

The shipyard is located on Bayou Boeuf near Morgan City. About 10 years old, it has a 400-ton drydock, a 250-ton TraveLift and a 150-ton Manitowoc crane. It also has an interesting background.

Putnam said before Linh started the shipyard, he sold seafood from his processing barge, and “was known throughout southwest Louisiana as Capt. Linh Seafood.” Then one day, the processing barge sank.

Linh was forced into teaching himself how to raise and repair the barge, Putnam said, and in so doing found an aptitude for the ship repair business, which led to his exiting the seafood business in favor of it.

“Linh has two daughters and no boys to take over the shipyard when he retires,” Putnam said. “He treats me and Alex like we were his own children. He even had us to his home for Easter dinner, just like being part of the Nguyen family.

“My wife, Julie, and I thought how fitting it would be to name this vessel after him,” Putnam said.

Caption for photo: The mv. Francis J. Blank, built in 1966, is being completely restored at LD Marine in Amelia, La.