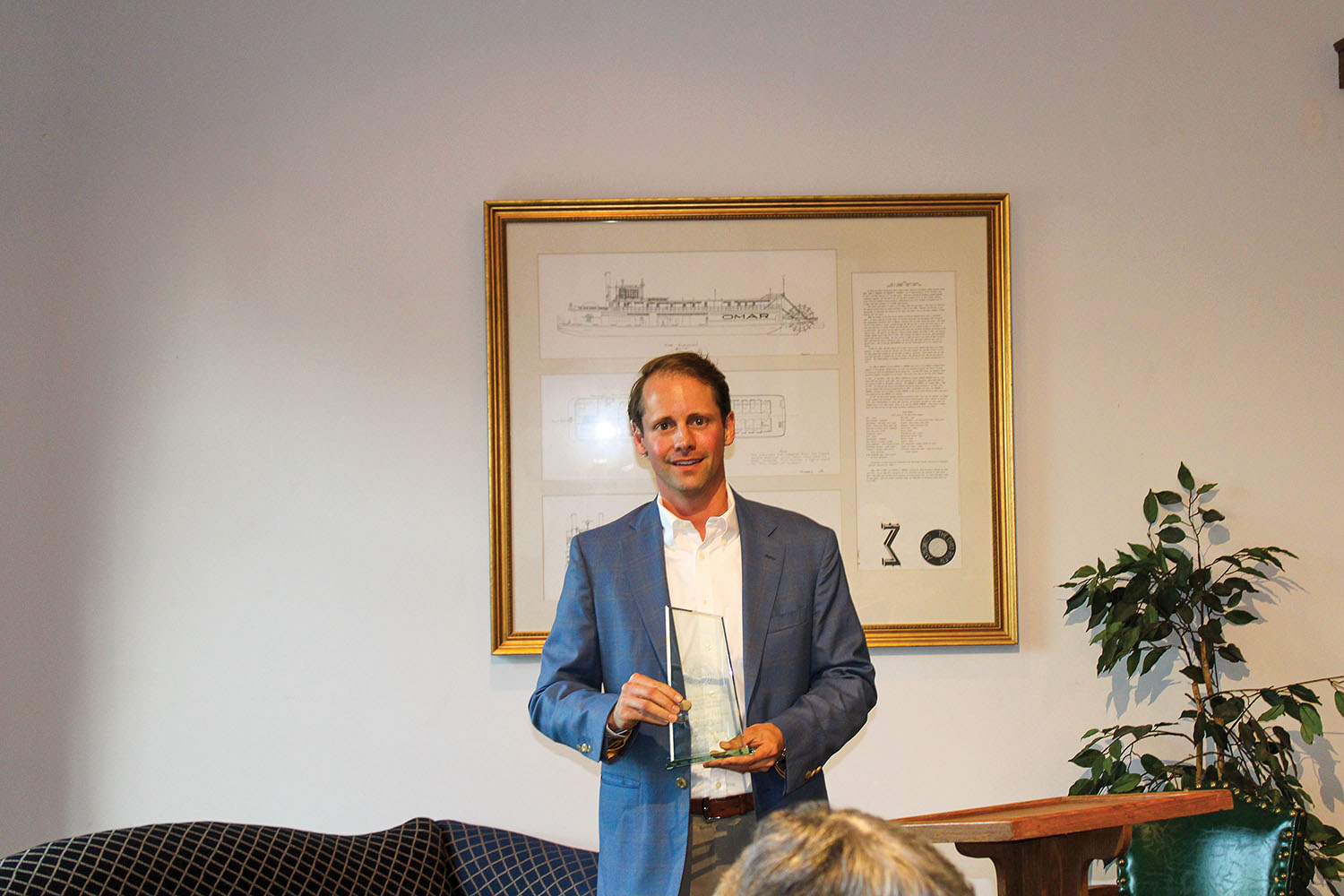 As a fifth-generation mariner, Hines Furlong Line President and CEO Kent Furlong always wanted to work in the river industry.

“My bedroom was decorated with barge industry flags,” he said. “I was a little bit of a nut about it.”

Furlong, 38, was out riding boats with his grandfather, whom he called his personal hero, at 5 years old. He became a deckhand at 18 and founded his company at 20. It has grown to 340 employees and more than 50 tank barges with a capacity exceeding 1 million barrels.

On May 20, Furlong was honored by the Port of Paducah Propeller Club as the club’s Maritime Person of the Year during a presentation ceremony and dinner.

Furlong said the honor meant a lot to him, although it was a novel experience.

“I’m used to being the guy in the audience watching it,” he said of similar award ceremonies.

Port of Paducah Propeller Club Chairman Andrew Gates, an assistant captain at Hines Furlong Line, told some of Furlong’s family background and the company’s history before introducing him.

The family started the Bowling Green & Evansville Packet Company in the 1870s through 1938. In 1940, James R. Hines and Company was formed, continuing the asphalt towing trade. It eventually expanded into the gasoline field.

In 1946, James R. Hines Corporation came into existence when Furlong’s grandfather returned home from World War II. The company expanded not only with boats and barges but also eventually owning and operating Zephyr gas stations, a river terminal and a tanker truck facility.

In 1955, James G. and brother Warren Hines formed Hines Incorporated and expanded their operating area to cover the entire inland waterways from Houston to as far north as Pittsburgh and Minneapolis.

In 1991, Hines Incorporated was sold to American Commercial Barge Line, and a joint venture, Hines American Line, was formed. That history continued with the formation of Hines Furlong Line on June 25, 2004, in Bowling Green.

In December 2017, Hines Furlong Line purchased Hunter Marine Transport Inc. from business partner Ron Hunter, allowing the Hines Furlong Line to broaden the scope of its customer service to not only barges but also vessels of varying horsepower. That also gave Furlong about 250 employees after working for the first 13 years without any.

He has continued to look for opportunities to expand the Hines Furlong fleet and most recently has built new vessels.

“It doesn’t take long to figure out he has a passion for this industry,” Gates said.

He said it was particularly fitting that the award went to someone who, as a former deckhand “knows what it’s like working in extreme heat and cold out on the river.”

Additionally, he called his story a true reflection of where the industry is going.

“He truly drives each and every one of us to be better,” Gates said.

Furlong is quick to say any accomplishments he has had over the years have not been his alone.

“People gave me chances and opportunities,” he said. “It’s all about luck, timing and relationships.”

He also wanted to thank all of the Hines Furlong Lines’ employees, without whom, he said, the company would not have succeeded.

“I’m really proud of what we’ve been able to do,” he said, “and I couldn’t do it without many of these dedicated employees.”

In other parts of the ceremony, club president Caleb King took time to recognize mariners for all they do, especially with their recent work in reconstituting America’s supply chain as the country pulls out of the COVID-19 pandemic.

“Maritime Day is really about the folks out there on that river,” he said.

He also led a moment of silence for those lost on the capsized liftboat Seacor Power.

Also honored at the ceremony were two students, to whom the club presented scholarships. They were Alyssa Baird and Brendan Draper.