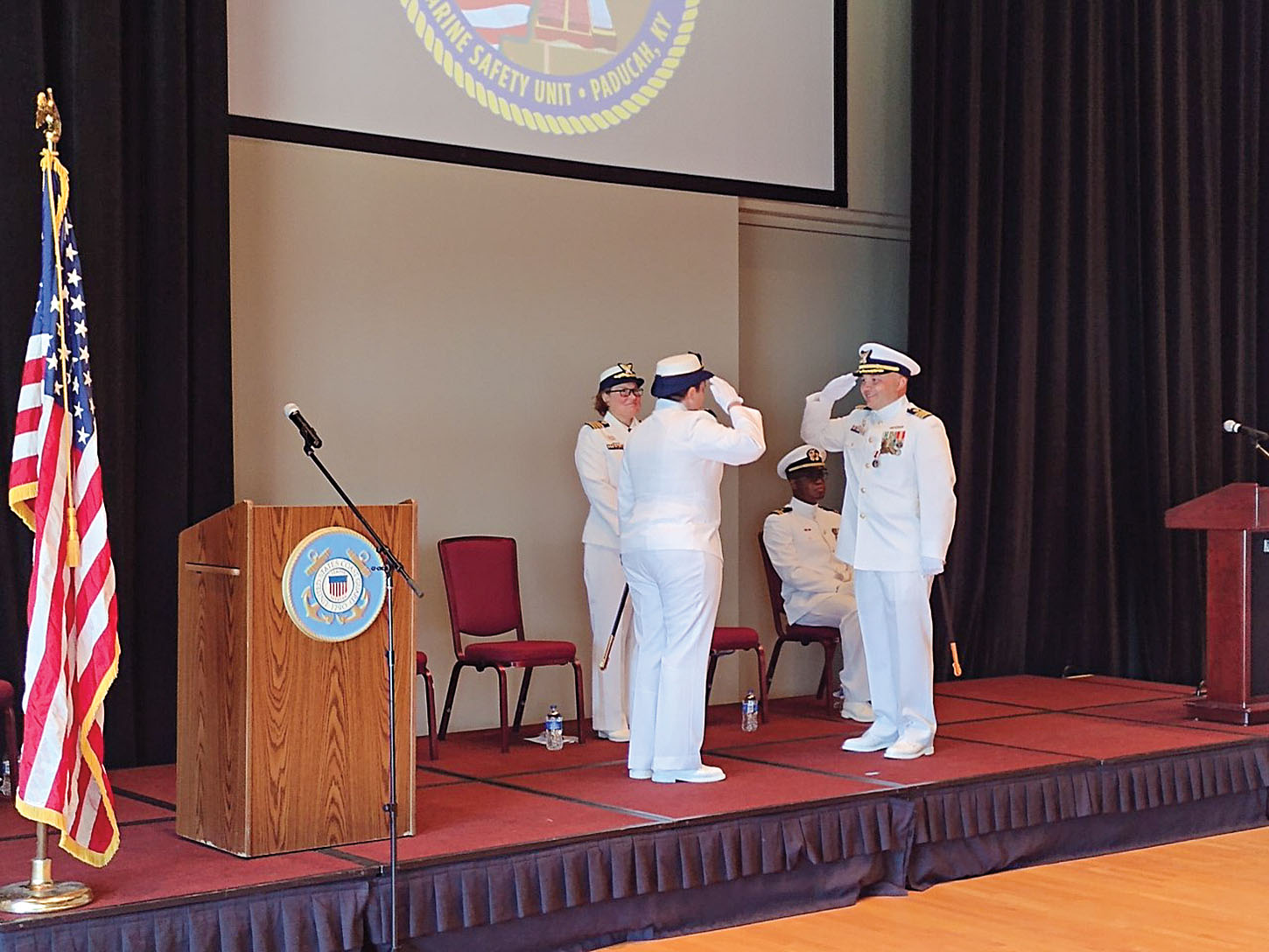 A Coast Guard change of command ceremony is a special and serious occasion, but as MSU Paducah Commander Luis Carmona stepped aside for incoming Commander Jennifer Andrew, there were also a few lighter moments.

Capt. Amy Beach, commander of Sector Ohio Valley, not only praised Carmona’s love for the Paducah community and commitment to working alongside industry partners. She also talked about his love of Hot Wheels cars, how he gave them on birthdays and other special occasions and how that now, thanks to that, her 6-year-old nephew thinks she’s the “cool aunt.”

While other commanders might hand out medals, citations or coins, “You know you’ve done a good job if Cmdr. Carmona hands you a bag of gummy bears,” Beach said.

Beach presented Carmona with a citation for meritorious service with operational distinguishing device, and Mayor George Bray made him a “duke of Paducah” as part of the June 4 ceremony at the Carson Center in Paducah.

Carmona joked that there may have been those among his crew who placed bets on whether he would cry as he talked about his unlikely entry into the Coast Guard as a young man in Puerto Rico.

First there was the time he didn’t get to practice in front of a minor league baseball scout although his coach had told him he was going to.

Despite that, he got a baseball scholarship and went on to college, but it wasn’t the campus he planned on because he wasn’t accepted to his first choice of engineering program.

Then he decided to join the Coast Guard after talking to some recruiters on campus. The person in the office when he went to sign up, who was from the U.S. mainland, asked him what year he was in in college, but in Puerto Rico it’s common to say first year, second year and so on, not freshman or sophomore, which confused him.

“The recruiter told me you’re never going to make it into the Coast Guard if you don’t know what a sophomore is,” he said. He was turned down but went back a second time and was accepted.

Carmona also failed the ADSVAB twice, after which he carried study materials with him everywhere he went. He passed on the third time, but his score improved by more than 20 points, which triggered a retest, which he also passed.

He joked that he remembers telling a recruiter, “My English is not very good-looking, but if you give me a chance, I’ll do my best every day.”

He made that a promise that has carried him through his career, even when that also didn’t go according to plan. He requested seven different cutters and was assigned to a land position. Then he asked to go to Pittsburgh, Pa., and ended up in Paducah, Ky., he said.

As he talked about his wife and their children, Carmona started to wipe away a tear. “I know what you’re thinking,” he said, looking at his crew. “You think you’re going to win your bet.”

Carmona said he wanted to talk about not just his successes but also those times that didn’t go according to plan because he wanted to impart an important message.

“God has everything under control, and things are going to happen at the right time, not early, not late,” he said.

Carmona’s next assignment is taking him to Coast Guard headquarters in Washington, D.C., where he will be an aide to an admiral.

Carmona and Andrew, the incoming commander in Paducah, were classmates in officer candidate school. Andrew most recently served as chief of prevention at Marine Safety Unit Port Arthur, Texas, where she was responsible for operational oversight of all marine safety operations spanning 128 miles of the Gulf Intracoastal Waterway and 55 nautical miles of the Sabine-Neches Waterway in the nation’s third largest bulk tonnage and petrochemical port.

Andrew has a Volkswagen Tiguan, so instead of giving her a Hot Wheels model Porsche, his favorite, to welcome her, Carmona managed to find a Volkswagen version for her. Besides Volkswagens, she’s also a cycling aficionado who has biked all over Europe and has participated in an Ironman triathlon in Texas, which required a 2.4-mile swim followed by a 112-mile bike ride, followed by a full marathon run of 26.2 miles.

With her parents in the audience, Andrew recalled she didn’t know her father hadn’t told her mother that she had joined the Coast Guard because he didn’t want her to worry. As Andrew made the brief phone call home to San Antonio, Texas, to let them know she had arrived safely for basic training, she gave her mother the shock of a lifetime. “Sorry for selling you out, Dad,” she said.

The appointment as commander to the MSU Paducah unit is Andrew’s first command, what Beach called “the highest level of trust and confidence that the Coast Guard bestows on any of its members.”

In Paducah, she said, it comes with the vital job of keeping commerce flowing in America’s heartland.

Carmona’s tour, which began in 2018, was marked with many serious and some catastrophic events. In addition to high-water events and the global pandemic, the unit responded to 87 groundings, 75 allisions/collisions, eight floodings/sinkings, 161 equipment failures, 66 personnel casualties and 66 pollution events, according to information provided in the program for the ceremony.

All of that meant a lot of hard work for the group Carmona called the best crew in Kentucky, along with all of those who supported them.

That’s why Carmona publicly gave flowers to his wife, Rosa, and pinned his two sons, Vincent and Nicolas, with the Medal for A Military Child as part of the ceremony. Recognition of the sacrifices her own family has made are part of why Andrew gave awards to her own parents.

Finally, that appreciation for support through both the hard times and the ones that are more light-hearted is why, midway through his speech, Carmona suddenly stopped talking and looked out at the audience. He then asked every one of the dozens of people in the room to reach under their chairs. There, duct-taped to the bottom of every single chair, was a zip-top plastic bag. Inside was an inspirational quote rolled up and tied with a ribbon, a Hot Wheels Porsche and, of course, a bag of gummy bears.

Caption for photo: Cmdr. Jennifer G. Andrew and Cmdr. Luis Carmona salute during a June 4 change of command ceremony. The ceremony featured remarks from both, along with awards and a few surprises. (Photo by Shelley Byrne)