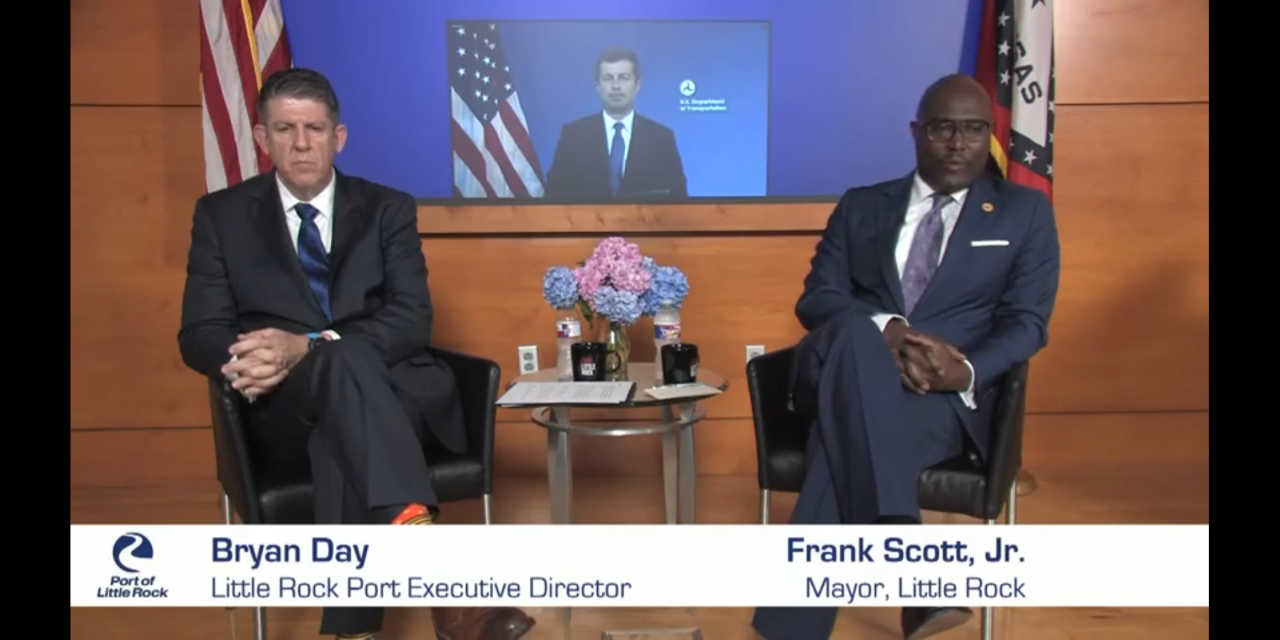 The Greater Little Rock Regional Chamber of Commerce hosted a virtual event celebrating the 50th anniversary of the McClellan-Kerr Arkansas River Navigation System (MKARNS), a 445-mile waterway that stretches from the confluence of the White and Mississippi rivers to Catoosa, Okla., near Tulsa.

Chesshir, who emceed the event, praised the waterway as “a system that means so much to us from an economic development standpoint, but especially so much to those around the country and around the world who actually utilize it as well.”

Hutchinson offered a brief overview of the history of the waterway, which stretches back to a study conducted in 1943. Thirteen years later, in 1956, Congress appropriated funding to build the system, which includes 18 locks in both Arkansas and Oklahoma.

“Fifteen years after that, it received its dedication with President Nixon present at the Port of Catoosa,” Hutchinson said. “So 13 years to develop funding, 15 years to do the project. That shows, as we celebrate this anniversary, how long infrastructure projects take in our country, both the planning stage and the development stage.”

The MKARNS thrives today as a multi-use waterway, which provides flood management, navigation, port development, multimodal logistics, hydropower and recreation to the region.

But Hutchinson also cast his attention on the future, mentioning specifically the ongoing study into the feasibility of deepening the waterway from its current authorized depth of 9 feet to 12 feet.

“That’s an important initiative, and we hope that can be carried out and become a reality down the road,” he said.

Hutchinson also highlighted the attention given to maintaining the locks and levees on the system.

“All of these are funding issues and point to the need—as perhaps the secretary will make that point as well—that we do need to have infrastructure investment here across our country,” Hutchinson said.

Addressing waterway stakeholders, Buttigieg noted his recent visit to the now-shuttered I-40 bridge over the Mississippi River between Memphis, Tenn., and West Memphis, Ark., praising local and state-level leaders who are working to mitigate the impact of the bridge closure.

“I know 50 years ago, you had a sitting U.S. president in your company, but hopefully a secretary of transportation will do the trick this time,” Buttigieg joked.

Buttigieg then went on to discuss the significance of not only the MKARNS waterway, but all the nation’s inland and coastal waterway infrastructure to the economic wellbeing of the nation.

“Our inland and coastwise transportation system employs more than 50,000 American workers, both afloat and ashore,” Buttigieg said. “One of the crown jewels of that system is MKARNS, which generates well over a billion dollars of economic value in Arkansas, Oklahoma and throughout the region and helps support in some way the transportation needs of a dozen states.”

Buttigieg acknowledged years-long efforts that it took to study, build and launch MKARNS, and he applied that discipline and vision to the present, calling today the “moment to be thinking about the investments that are going to be paying off for the next 50 years and beyond.”

“We’re proud of the programming we have underway, but we know that we can and must do a lot more to fix and modernize our infrastructure,” Buttigieg said. “That’s why the president’s vision for our infrastructure, the American Jobs Plan, invests an unprecedented $17 billion in our inland waterways, as well as coastal and land ports of entry and our ferries.”

Buttigieg then joined Scott and Day in a panel discussion on infrastructure and the MKARNS system.

“We are here celebrating what is, really I think, maybe the greatest return on investment in the history of American infrastructure,” Bynum said during a June 4 event held in person at the Tulsa Port of Catoosa.