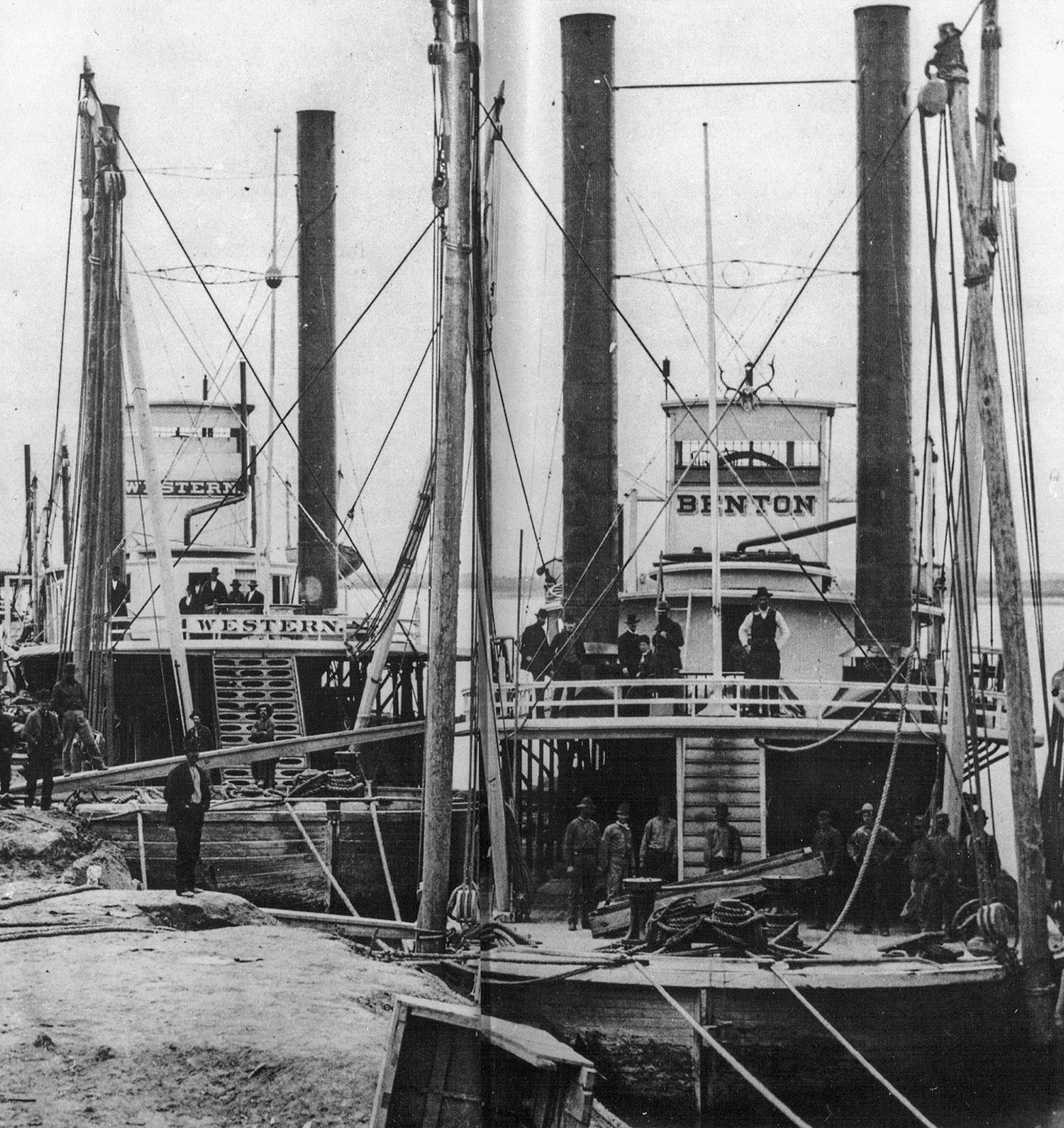 The Old Boat Column this week finds us looking back in time 145 years and exploring up the capricious and cursed Missouri River. Prominent in the image is the steamboat Benton, with the Western moored alongside.

Built at Pittsburgh in 1875, the Benton’s wooden hull was 197 feet in length by 33 feet in width; it drew 18 inches of water. Three boilers, having two flues, supplied steam to engines (15 inch cylinders with 5-foot stroke) that were manufactured by the James Rees firm at Pittsburgh, same makers of the machinery aboard the extant excursion steamer Belle of Louisville and museum towboat W.P. Snyder Jr.

The Benton was constructed for T.C. Power & Bros., and I.G. Baker & Company, for Missouri River service. The steamboat departed from Pittsburgh on its maiden trip in early 1875 and arrived at Fort Benton, Mont., on May 27, under the command of Capt. James McGarry; Joseph Hill was in charge of the clerk’s office. Thus began a colorful career in which the Benton made 44 trips to Fort Benton in addition to other trips to Montana points. During the summer of 1876, the stalwart sternwheeler went to war on the Yellowstone when virtually every available steamboat on the Upper Missouri was pressed into service to accommodate soldiers who were hot on the trail of Sitting Bull and the Sioux Indians.

The Benton set a record of 11 days and one hour in traveling from Bismarck to Fort Benton on May 31, 1877. The boat bettered its record on June 27, with a time of 10 days and 18 hours. The record was broken just a few days later by the steamboat Red Cloud.

All things considered, the Benton made more trips and carried more freight than any other boat serving Fort Benton. In 1884, it took down 250 tons, the largest cargo ever shipped from Fort Benton. By 1886, the boat was known as the “Old Reliable” in the Bismarck–Benton trade. During the summer of 1887, the steamboat departed Fort Benton with a cargo of 1,004 bags of wool and 350 bales of pelts. This departure, on July 24, 1887, was the boat’s final trip from Fort Benton; the vessel was sold in 1889 to James Boland and T.B. Sims.

On September 15, 1889, with Capt. Asa Boland in command and Capt. George Keith as pilot, the Benton was snagged five miles above Washington, Mo. Raised and restored to service, the sternwheeler was downbound at Arrow Rock, Mo., on July 31, when the tiller line broke, causing the steamboat to swerve and strike a snag, sinking a cargo of 600 sacks of wheat. The plucky riverboat, with Capt. James Boland as master, was again raised and returned to service, bringing a cargo of 2,500 sacks of wheat to St. Louis in August of 1896. On July 18, 1897, while downbound at the Sioux City drawbridge, a delay resulted in the boat getting out of shape. It backed into a submerged piling, and a large hole was knocked in the hull. In a sinking condition, the Benton floated down under the unopened bridge, tearing off the upper works and completely wrecking the steamboat.

Built at Pittsburgh in 1872, this wooden-hulled sternwheeler measured 212 feet in length by 34 feet in width. The steamboat made a total of nine trips to Fort Benton, with the last one being in 1878. The Western was destroyed by an ice gorge at Yankton, S.D., on March 27, 1881.

Caption for photo: The Missouri River steamboats Benton and Western at a landing. (Keith Norrington collection)