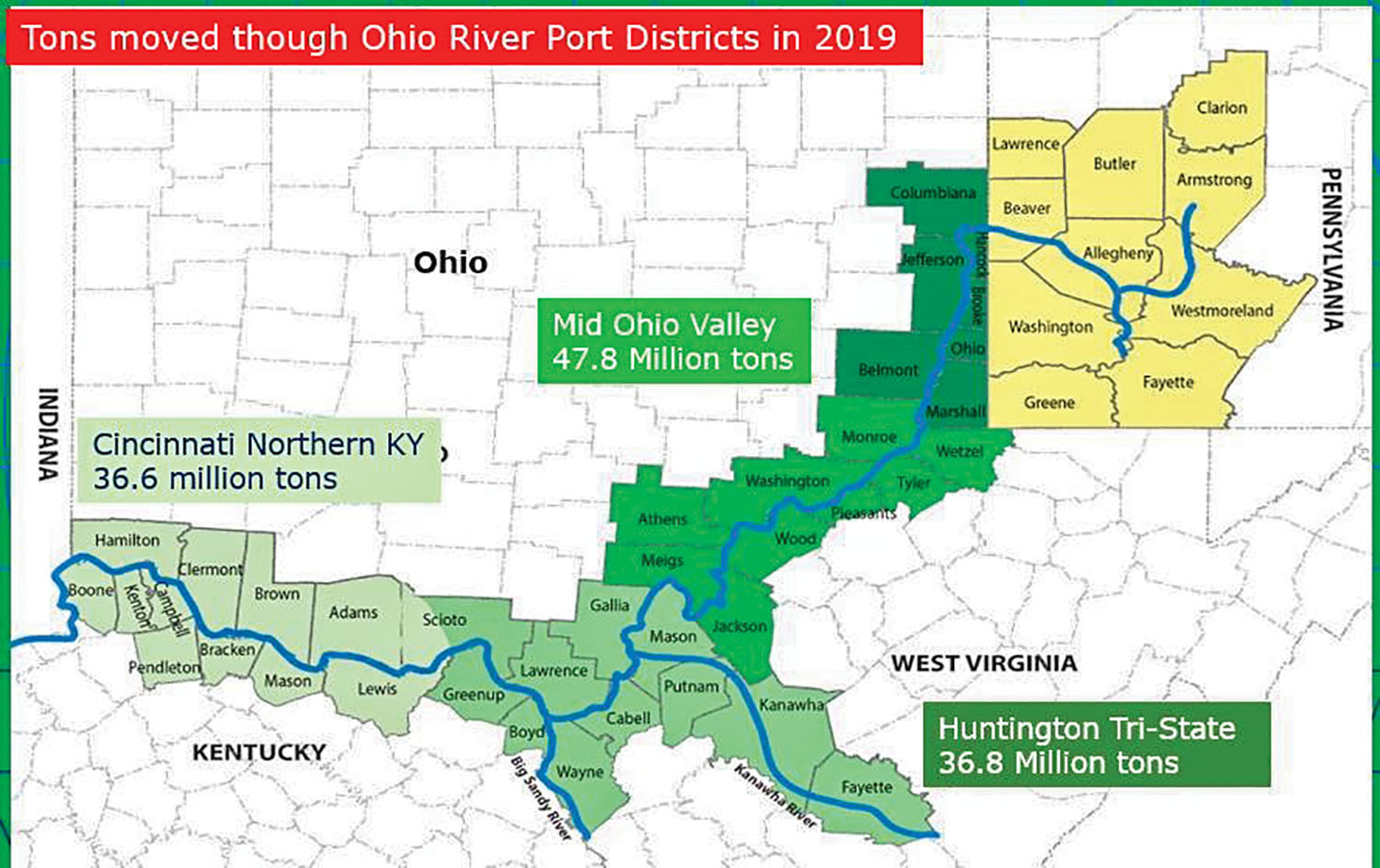 A new statistical port on the Ohio River has gained approval and is likely to become the largest inland port by freight tonnage.

Supporters have been working on the plan for the Mid-Ohio Valley Port District for about five years. The contractor received notice of the final approval June 8 from the Army Corps of Engineers. The port district encompasses nearly 220 miles along both sides of the Ohio River from Mile 40.0 to Mile 256.8.

Like all statistical ports, the Mid-Ohio Valley Port does not involve construction of any physical assets. Instead, it is a way to aggregate freight data.

“The grassroots group of Ohio River stakeholders began working together on the designation in 2016/2017 during ODOT’s Ohio Maritime Study and follow-on Maritime Strategy,” said Mark Locker, the Ohio Department of Transportation’s project manager for freight, maritime and logistics.

During the study, the data was analyzed for the Ohio River, including tonnage, value and commodities, and it became apparent that a statistical gap between Huntington Tri-State and the Port of Pittsburgh needed to be filled “to really tell the Ohio River freight story,” Locker said.

“From a USACE data assignment aspect, it was as though the Mid-Ohio Valley region didn’t exist,” Locker said. “When the Army Corps of Engineers would report statistics and rank ports, no mention of the tonnage, value or economic importance of the region was ever mentioned because nothing existed to assign the stats to. That ‘something’ is now named the Mid-Ohio Valley Port District.”

Locker added that the port designation could help the region when it makes requests for grants and other funding.

“The Army Corps of Engineers uses their detailed data to back up requests for congressional budgets to build infrastructure,” he said.

The only way a port district can be created is for a state to request it. In this case, both Ohio and West Virginia did so, with Ohio leading the efforts and hiring contractor W.R. Coles & Associates. The process included stakeholder meetings as well as gathering resolutions or letters of support from legislative leaders, local governments and public and private terminals and ports on both sides of the river. The new port district encompasses seven counties in Ohio and nine in West Virginia.

“The unique aspect of this designation is that it created a new port district where none had previously existed,” Locker said. “Throughout time, port districts have expanded the geography of their existing ports, but a new port district has not been created on the Ohio River in decades. Existing ports such as The Ports of Pittsburgh formally expanded their geography to collect data to a larger geospatial area, but the base region already existed as a designated Army Corps recognized port. After Pittsburgh expanded, then Huntington Tri-State expanded their data collection geography and more recently (2015) The Cincinnati-Northern Kentucky Port expanded (from 27 river miles to 227 river miles) to include counties on both sides of the river and connect with Huntington Tri-State.”

The formal designation from the director of the Ohio Department of Transportation to the Corps commander of the Huntington district was submitted July 22, 2020, for consideration.

Penny Traina, CEO and executive director of the Columbiana County Port Authority, called the port’s approval great news and suggested it will help in efforts to market the region.

“The creation of this designation will formalize a regional voice supporting the economic power of the region’s maritime freight transportation system,” she said. “We saw the need to market the Ohio River waterway system to increase economic development and growth.”
She also wished to express appreciation to ODOT and Locker “who have worked diligently in making this a huge success.”

The data collected by the port district has value, Traina said.

“The data is extremely important in the efforts of economic development on both sides of the Ohio River,” she said. “The data that we collect will include types of cargo shipped, tons of cargo, as well as monetary value of the cargo. The port district total tonnage will now be collected. As an economic developer we have a better understanding of the products that are being transported on our waterways systems. We can then utilize the information to secure additional state and federal maritime grants for future expansions along the Ohio River Waterways System.”

It will also be an important connection to global markets via the Gulf of Mexico, she said, offering continued support to manufacturing, energy production, polymers, chemicals, metals, wood products and transportation logistics.”

Locker said the Mid-Ohio Valley Port has the potential to be the largest inland port in the nation, based on data from neighboring port districts collected in 2019.

“We believe that currently the Ohio River has four of the top five inland river port districts in the United States by tonnage and value, i.e. Pittsburgh, Mid-Ohio Valley, Huntington Tri-State and Cincinnati-Northern Kentucky,” he said. “It is anticipated that the Mid-Ohio Valley region could very well become the No. 1 inland port district in America once the Army Corps assigns the tonnage and value within their next reporting document.”

Caption for graphic: A graphic shows the location of the new Mid-Ohio Valley Port District and the freight tonnage by volume of surrounding districts as of 2019. The new district may become the largest inland port by freight tonnage. (Graphic courtesy of Ohio Department of Transportation)