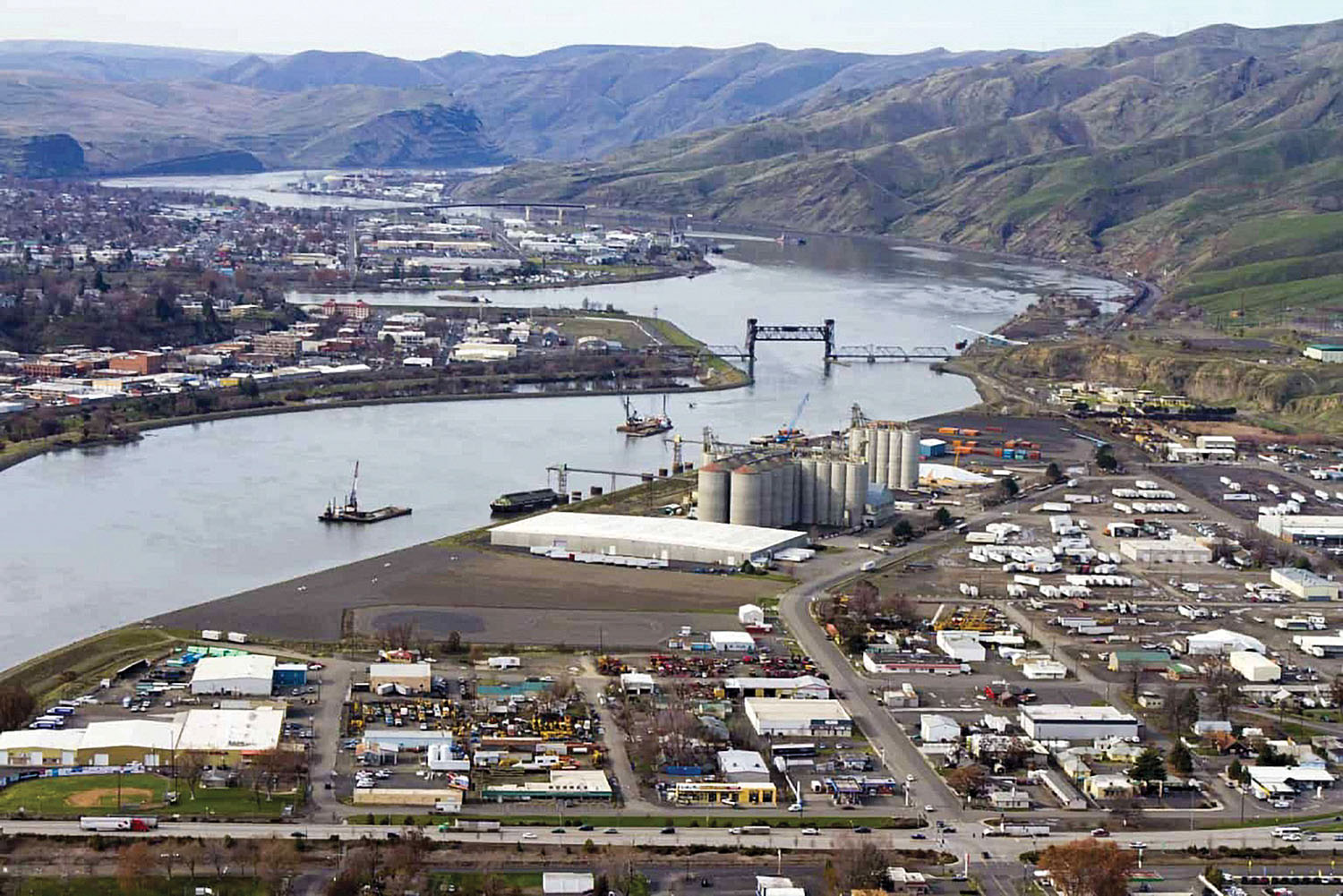 Long before European settlers arrived on the Columbia and Snake rivers, the waterways were important transportation corridors for the native peoples. When the Lewis and Clark expedition traveled down the rivers in canoes, William Clark noted that certain narrows and locations like Celilo Falls attracted “great marts of trade” and exchange.

Since the very earliest days of European settlement and cultivation of the Pacific Northwest, the importance of the system for agricultural exports was recognized. Its hydropower potential was also recognized, with President Theodore Roosevelt an early (and ultimately successful) proponent of building dams for power generation along the two rivers.

Early steamboats voyaged up the rivers. But large-scale commercial navigation on the rivers hit a landmark in 1938, after the Bonneville Dam, which included navigation locks, opened. According to the Pacific Northwest Waterways Association—founded in 1934 as the Inland Empire Waterways Association—more cargo moved by water in 1938 on the Columbia River than in the previous 22 years. The dam-building era lasted until the middle 1970s.

Today the corridor is a key outlet for crops grown in Oregon, Washington, Idaho and the Dakotas, including soybeans, corn and wheat. The corridor exports roughly two-thirds of the region’s wheat crop, which is mostly soft white wheat. More than half of all U.S. wheat exports are shipped on the Columbia–Snake River system, making it the top wheat export gateway in the nation and the third largest in the world. In 2018, the Columbia & Lower Willamette Federal Navigation Channel transported 56 million tons of cargo valued at $23 billion, according to the Corps of Engineers.

Without the system’s cost-effective and clean water transportation, many area farmers could not compete internationally.

This summer, the region’s farmers are keeping an eye on the skies as the entire western U.S. is under a drought advisory. Eastern Washington state is having its driest spring in 100 years.

Each year, the Corps dredges between 6 million and 8 million cubic yards of sand from the 107-mile shipping channel between Astoria, Ore., and Vancouver, Wash.

The Portland (Ore.) Engineer District, established in 1871, operates the district’s own ocean-going hopper dredges, the Yaquina and Essayons, which together maintain navigation channels on the West Coast, roaming all the way down to Alaska and Hawaii. Essayons has been lent to the Mississippi River in emergencies. Essayons was built by Bath Iron Works; Yaquina by Norfolk Shipbuilding & Drydock Corporation.

This January saw a milestone reached when the Corps completed rehabilitation of the North Jetty and reopened it to the public. This is one of three public jetties at the mouth of the Columbia River Estuary exposed to Pacific Ocean waves. Construction of the jetties originally began as long ago as 1885. The North Jetty had receded about 1,800 feet in length from 1916. The Mouth of the Columbia River Jetty System Major Rehabilitation Project is a major Portland Engineer District project, whose costs have totaled about $200 million. The district has received final funding, said Kristin Meira, executive director of the Pacific Northwest Waterways Association, and the South Jetty’s rehab is due to be completed by 2023. Jetty A’s rehab was completed in 2017.

Tidewater Barge Lines is the biggest barge operator on the system, having served the region for almost 100 years. With a fleet of 14 towboats, 62 grain barges and 8 double-hulled petroleum barges Tidewater regularly operates all the way up to the port of Lewiston, Idaho, the West Coast’s most inland port (named for Meriwether Lewis).

Like other companies, Tidewater was affected by the pandemic and took the opportunity to drydock and rehab some of its assets. In the company’s latest newsletter, CEO Todd Busch reported that this year’s first quarter saw a “robust” grain business, but that petroleum movements were “slow,” although expected to pick up as driving and demand increase. Wood products and containerized solid waste are also important cargoes.

Meira noted that soy and corn exports are becoming increasingly important. The American Soybean Association is due to visit the system in July.

Another iconic Pacific Northwest barge company, Foss Maritime, was founded by Thea Foss, a Norwegian immigrant who reportedly inspired the hit 1933 movie “The Adventures of Tugboat Annie.” After enjoying great success and passing through several corporate hands, Foss Marine has been part of the Saltchuck family of companies since the 1980s, a diversified group of companies with operations in marine services, air cargo, energy distribution, domestic and international shipping and logistics that stretch to Alaska, Hawaii and the Gulf Coast. Saltchuck means “salt water,” and Foss is well known for its tug-assist and harbor services in Puget Sound, its support of offshore oil rig and wind operations, and its coastwise barging and fleeting operations.

In 2009, however, Foss pioneered a never-before-used route up the Columbia River to deliver a 190-ton turbine to Revelstoke, Canada, that was built in Brazil. Plotting a never-before commercially traversed 45-mile stretch of the Columbia River, Foss worked in conjunction with B.C. Hydro to regulate the flow of water in three dams to minimize the current and provide the needed depth.

Before the COVID-19 pandemic hit, several river cruise operators had announced big plans for the Columbia/Snake River system. On June 14, American Queen Steamboat Company announced it had resumed operations on the two rivers for the first time in 20 months—for fully vaccinated passengers only, however. The American Empress set out from Vancouver, Wash.—across from Portland, Ore.—to Clarkston, Wash. It’s the first passenger vessel large enough to fall under pandemic restrictions set by the Centers for Disease Control to resume service on the system, 20 months after the company’s last voyage.

Of 20 scheduled sailings for American Empress’s 2021 season, 13 are sold out, according to the company. The few remaining spots are open to passengers who are fully vaccinated with a vaccine approved by the Food and Drug Administration or World Health Organization. Passengers must show proof of vaccination or be denied boarding. A fleetwide 100 percent crew vaccination policy takes effect July 1.

The big topic of discussion by stakeholders on the Columbia and Snake rivers lately has been the fate of a sweeping plan proposed by Rep. Mike Simpson (R-Idaho) to breach four dams on the lower Snake River—the Lower Granite, Little Goose, Lower Monumental and Ice Harbor dams—to purportedly benefit migrating salmon.

Simpson’s plan came after the Northwestern Engineer Division, Bonneville Power Administration and Bureau of Reclamation, which share responsibility for the structures, issued an environmental impact statement declining to close them after years of contention and litigation. In 2016, a federal judge had ordered officials to consider breaching, removing or altering the four lower Snake River dams as a way to improve fish survival.

Everyone agrees there is a crisis in salmon populations on the West Coast. It’s been going on for decades. All eight of the major navigation dams were built with fish ladders that were designed to preserve the migration patterns of anadromous fish. Fish runs had already been decreasing; the decreases continued after the dams were built.  Thirteen populations are listed under the Endangered Species Act, and all four salmon and steelhead populations in the Snake River Basin are at risk of extinction, according to NOAA Fisheries.

Simpson’s plan, called the Columbia Basin Initiative, acknowledges the issue’s complexity, and admits that it would be very difficult to replace the ecological and economic benefits of water transportation. The plan includes compensation to mitigate what Simpson admits would be substantial economic effects of the closures, but so far he has not put the proposal into a bill and has insisted he has no immediate plans to do so while stakeholders continue to discuss it.

Despite claims of dam removal advocates, it’s not unequivocally clear that the dams alone are to blame. The salmon declines are spread across the West Coast and include salmon populations that spawn on undammed rivers in Alaska like the Yukon and others. Climate change may be a factor.

According to a 2020 survey of salmon populations that looks at data over the past five years, high-value Chinook salmon remain in serious decline, although lower-value species like pink salmon are doing well. “At the broadest level, the major implication of our results is that most of the salmon conservation problem is determined in the ocean by common processes,” the study concludes. That agrees with assessments by the Corps of Engineers that fish ladders and other mitigation measures at the dams have addressed the river portions of the salmon journey.

Washington Gov. Jay Inslee and U.S. Sen. Patty Murray (D, Wash.) released a statement in May calling for a “science-based” process to  “ensure reliable transportation and use of the river” and “reliable, clean energy” while addressing the salmon issue. The pair oppose Simpson’s plan being included in the proposed federal infrastructure package currently being negotiated.

Meira said, “If you took away barging on the Snake, you would be adding the equivalent of building one new coal plant every five years” to the region’s carbon emissions. The Corps of Engineers has done “amazing work” in making the existing dams more salmon-friendly, she said, with a survival rate of juvenile salmon of 95 or 96 percent.