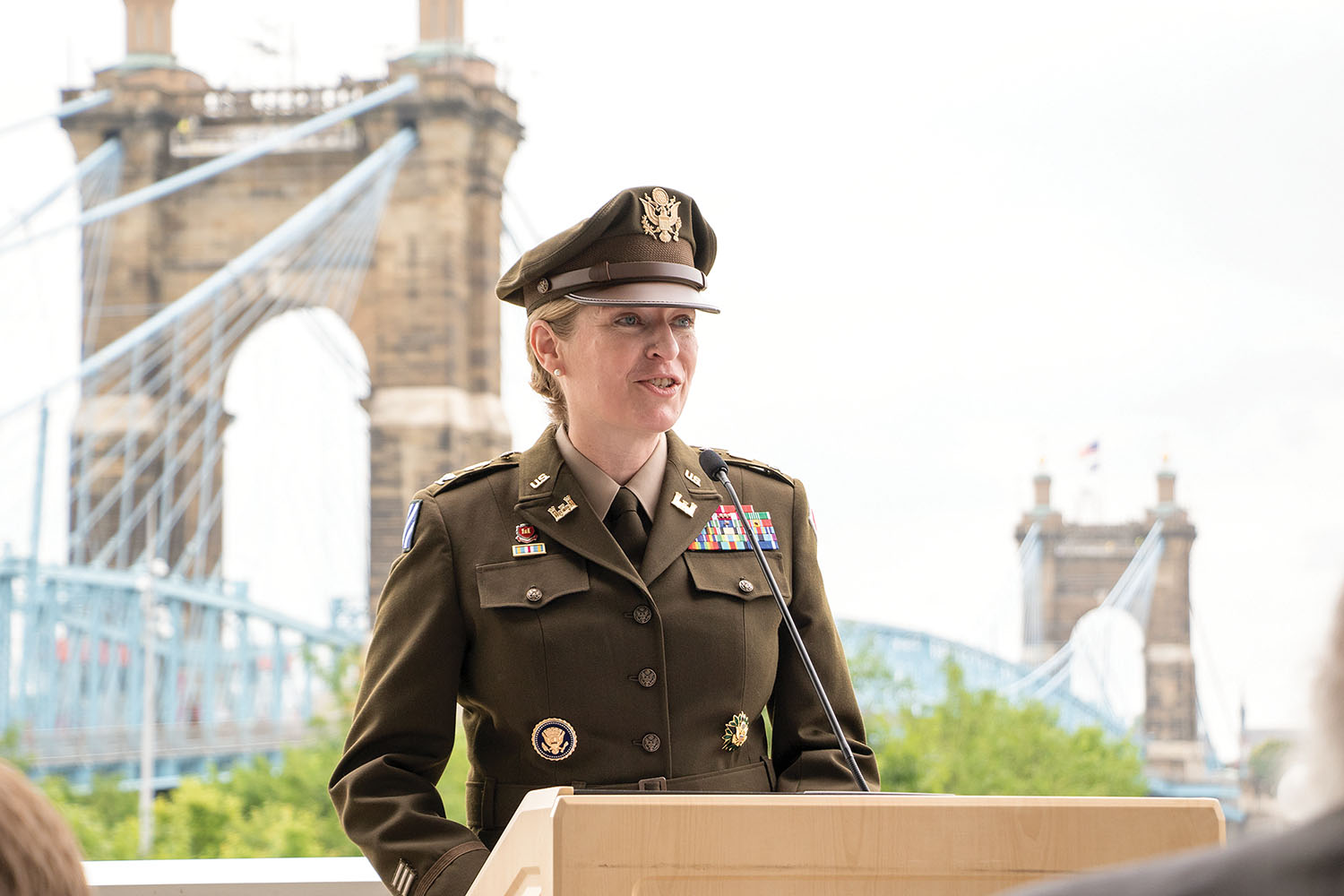 With the passing of colors and brief remarks from each, command of the Corps’ Great Lakes and Ohio Division passed from Maj. Gen. Robert F. “Bob” Whittle Jr. to Col. Kimberly “Kim” A. Peeples in a June 11 change of command ceremony.

The 30-minute outdoor ceremony in Cincinnati, Ohio, was broadcast live on the district’s Facebook page for those who could not attend in person due to COVID-19 restrictions.

It began with the presentation of eight red roses representing the division and its seven districts being presented to Whittle’s wife, Kathleen Whittle, along with welcoming gifts to Peeples’ husband, John, and son, Van. The gifts represented the support and contributions made by loved ones.

Following the playing of “Honors” and the national anthem, as well as the invocation and the formal reading of orders, the division’s flag was then passed.

As explained by the emcee, the unit’s colors are the commanders’ symbol of authority, representing their responsibility to the organization. “Wherever the commander is, there also are the colors,” he said.

The colors were handed to Whittle, as commander, for the last time. Whittle then passed them to Lt. Gen. Scott Spellmon, the 55th chief of engineers and commanding general of the U.S. Army Corps of Engineers, relinquishing Whittle’s responsibility and authority. Spellmon then presented the colors to Peeples, charging her with the unit’s responsibility and authority. Finally, Peeples passed them back to the unit’s custodian of the colors, symbolizing the bond between the unit’s military leadership and its workforce, including predominantly civilians, who have made up the backbone of the Corps’ success for more than 200 years, the emcee said.

Spellmon noted in his remarks that the district encompasses seven engineer districts with more than 4,700 personnel operating in 17 states and infrastructure valued at more than $80 billion.

Whittle has served in leadership roles at a number of engineer regimental units, Spellmon said. His military career has included deployments in Bosnia, Iraq and Afghanistan. He has been in the Corps of Engineers as division commander for two years, and has also served on the International Joint Commission, regulating water levels on the Great Lakes, and as a commissioner on the Mississippi River Commission. During those two years Whittle dealt with record floods on portions of the Mississippi River in both 2019 and 2020, as well as record high elevations on all five of the Great Lakes.

“You’ve given us so much in that amount of time,” Spellmon said of Whittle’s tenure.

The Great Lakes and Ohio District is one of the Corps’ nine regional commands, Spellmon noted. One of Whittle’s first tasks was the planning of the reorganization of the Chicago Engineer District to ensure its long-term vitality, working across several engineer districts and two regions and multiple congressional districts to find a solution for funding and workload issues.

Whittle undertook the task with attention to detail and had a plan for action within his first 100 days in command.

“To this day I use that as an example of what right looks like in making a fundamental change for the better, not just for this region but for the enterprise, and I want to thank you for that,” Spellmon said.

He also praised Whittle’s close work during the COVID-19 pandemic with FEMA, the Department of Defense, the Department of the Army and others in Washington, D.C. During that time the division established 11 alternate care facilities with 6,500 bed spaces for patients across the region and helped to lead more than $250 million in contracts.

Meanwhile, he said, “This division never missed a beat in delivering the other program goals.”

Now, he said, Whittle will have some time to focus on what he called “serious road biking” as well as resuming triathlon training. He is slated to become the next deputy commanding general of U.S. Army North in San Antonio, Texas.

Whittle praised the division’s workforce, noting that the Corps kept commerce moving on the nation’s waterways in spite of the pandemic.

“We kept rolling like that because we are the pilot light of the nation’s economy,” he said.

Peeples graduated from the U.S. Military Academy at West Point, N.Y., in 1994 and was commissioned into the Corps. She has an impressive military background, Spellmon said. Like Whittle, she is a veteran of Bosnia and the Operation Iraqi Freedom 1 and 2 campaigns. She also served in the White House military office. She holds a master’s degree in construction management from the University of Washington in Seattle and a master’s degree from the U.S. Army War College in Strategic Studies. Most recently, Peeples was commander of Joint Base Myer-Henderson Hall in Fort Myer, Va., from where she was instrumental in planning for the presidential inauguration as well as responding to the January 6 riots at the Capitol. She was also previously program manager for the Kansas City Engineer District.

A native of Akron, Ohio, Peeples expressed her eagerness for the job ahead.

“Taking command of this storied division is a dream come true,” she said. “I’m back home to a state, Ohio, that I love dearly.”

She promised, “We will carry on the important work of the division, to strengthen America.”