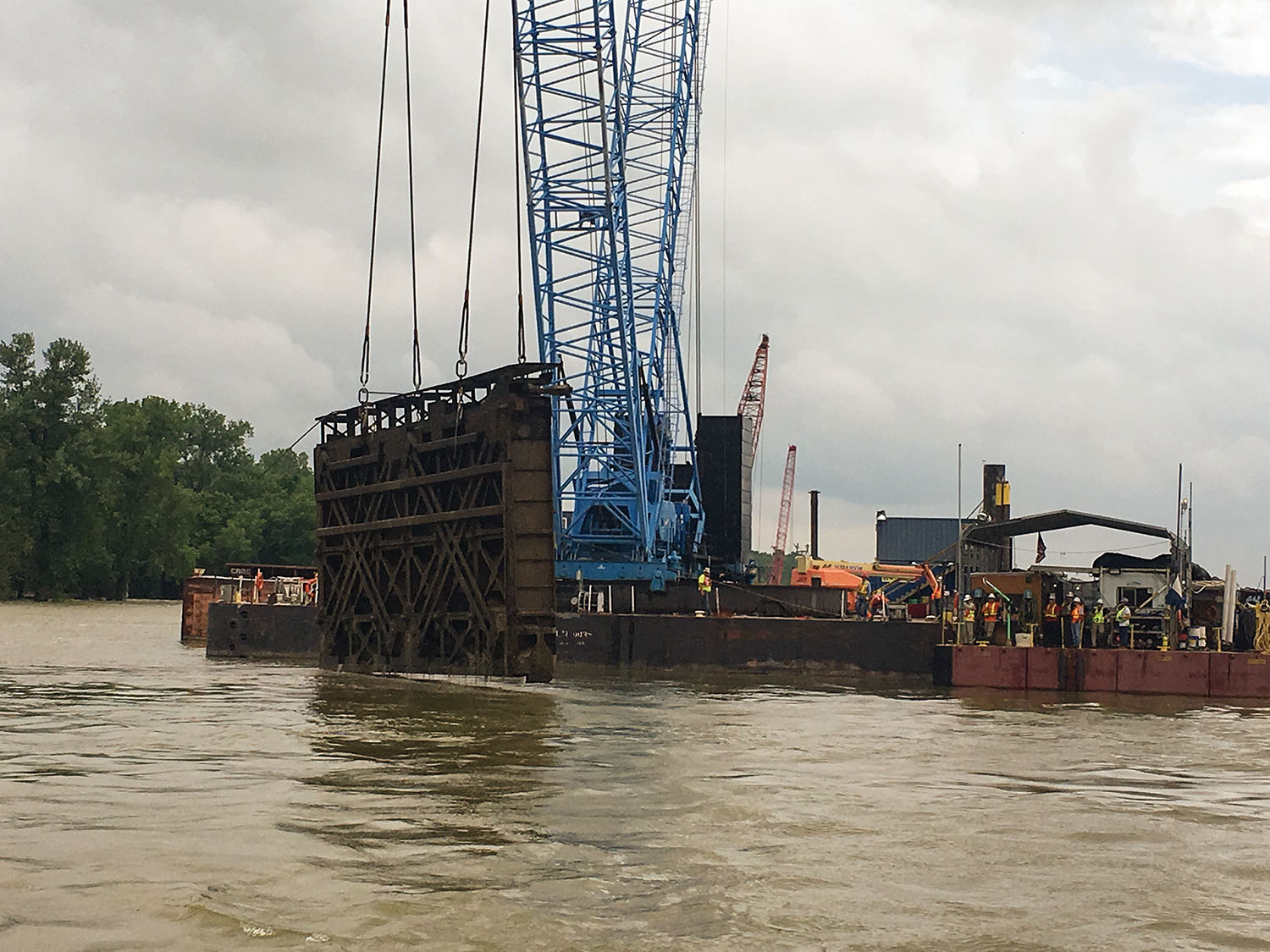 Meanwhile, crews have been hard at work restoring the construction site that operated more than 30 years adjacent to the Olmsted Locks and Dam, back to its natural state.

Destruction of the Olmsted Resident Office, where more than 30 employees worked during the height of the project’s construction, is a major milestone for wrapping up the project.

“Demolition of the resident office is currently underway,” said Katelyn Newton, chief of public affairs for the Louisville Engineer District. “A good majority of interior and office items have already been removed. The building is currently still standing with miscellaneous interior items such as HVAC, electrical conduits and drop ceiling remaining.”

The office was built in 1994 to house construction division employees, but it has not been needed since the project became operational in 2018.

“This is the end of an era for the employees of Construction Division and their families who have worked to complete this critical infrastructure improvement for the nation,” said Johnny Ringstaff, deputy chief of the construction division. “A debt of gratitude is owed to all of the dedicated employees who worked here showing the commitment to excellence required to complete this one-of-a-kind project.”

Bill Hunter, a civil engineer assigned to the Louisville Engineer District, said leaving the office where he worked for 25 years feels like saying goodbye to an old friend.

“I worked with a lot of fine people in that building,” he said. “I have spent approximately 25 years of my career in that facility, helped give it birth and will help oversee its demise.”

“Yes, I am sad,” he added.  “It is an old friend.  I hope I was a friend in return.  The Olmsted project has gone full circle, and so has my career.”

Hunter was one of the first employees inside the office when it was new and was also one of the last ones to move out. In February, the last five staff members moved to a temporary construction trailer in an adjacent parking lot. That crew will remain on site through 2022 to oversee completion of the demolition of locks and dams 52 and 53 and associated contract closeout actions.

“The more than 8,300-square-foot office will be demolished by the site restoration contractor, and the ground will be restored to its natural condition,” said Greg Hales, contract performance specialist. “Once our closeout activities are completed, Construction Division will coordinate the removal of the trailer and turn the fenced parking lot over to Operations Division on our way out the gate.”

Newton noted that the site restoration is progressing, with all construction trailers from the main Olmsted Dam contract removed off site and more than 9,000 oak, hickory, maple and walnut saplings already planted.

“There is more than 17 acres of land currently covered with rock that is being restored,” she said. “The rock is being removed, and grass seed will be planted in the fall.

The project also includes the removal of structures at the former Dam 52 down to an elevation of 284 feet and those at Dam 53 to 280 feet.

Remaining real estate at the Dam 52 site is being conveyed to the Metropolis-Massac Port Authority later this year as required by a provision in the 2020 Water Resources Development Act. Although the port authority has been in existence since 2009, it has not previously had any physical assets. The port authority will own 19.1 acres at Mile 938.9, with approximately 1,800 feet of river frontage. The only remaining structure to be left on it when demolition is complete is a 40- by 90-foot metal storage building on a berm above high water. Port authority director Scott Garrett said that although it was built in 1970, it remains in excellent shape.

Garrett previously said the port authority board would consider leasing the property or entering into a partnership or other type of development but is not interested in being a riverport operator.

Olmsted Project Manager Dewey Rissler said the demolition is about 75 percent complete at the former Dam 52.

“They’ve got all the wickets out and pretty much all the locks out,” he said. “They should be finishing that up sometime this fall.”

The contractor, C.J. Mahan Construction Company LLC of Columbus, Ohio, is currently demolishing the Chanoine and Bebout weirs and working to break up the concrete on piers one through five, Newton said, adding that no more blasting is expected at Lock and Dam 52.

The same contractor also won the bid for demolition of the former Dam 53, just upstream from the new dam at Olmsted, Ill.

“They have mobilized down there at the site, getting everything ready to go as soon as they can,” Rissler said, noting that includes submitting blasting plans for review.

Daily blasting activities are expected to occur Monday through Saturday between 10 a.m. and 2 p.m. Access to the blasting area will be controlled by stopping all river traffic between the Olmsted Dam downstream at Ohio River Mile 964.6 and Ohio River Mile 961 upstream during blasting operations. The safety perimeter will be maintained until an all-clear has been issued.

“What’s left to be removed down there is all underwater,” Rissler said, noting that old lockmaster and assistant lockmaster houses at both sites have been demolished as they were in poor condition and contained both asbestos and lead-based paint.

The lock chamber wall closest to the land will remain to ensure stabilization of the riverbank.

As for the outer wall, “They’ll set charges to fracture that,” Rissler said.

Newton said the crews currently working at the site are excavating debris off the bear trap leaves in preparation for cutting and removal.

No plans have been advanced for the property at the site that is above water, up on a bluff.

“If you cleared the trees off, you could see 10 miles or more,” he said. “It’s a gorgeous location.”

The normal process following site restoration would be to sell the property at auction through the General Services Administration, he said, but added there is not yet a timeline to do so.

When demolition of both the Dam 52 and Dam 53 sites is completed, it will be safer for passing river traffic, Rissler said.

“The whole purpose here is to provide safe, navigable passage through these areas for commercial and pleasure boating,” he said.

Demolition of the underwater structures should leave 12 to 15 feet between the bottom of any passing boats and the top of any remaining structures even in low water, he said.

Project timelines call for the Dam 52 site demolition to conclude this fall, with site restoration at the former Olmsted construction site complete later in the same season. Final Dam 53 site work should be finished in summer 2022, and the entire project will wrap up in fall 2022, Rissler said.

“Everybody thought once the dam was complete that the project was over, but there was a lot of work to do to finish the entire project,” Rissler said. “I try to remind folks of that. Olmsted is not just the dam. It’s the removal of 52 and 53. We still have things to do.”