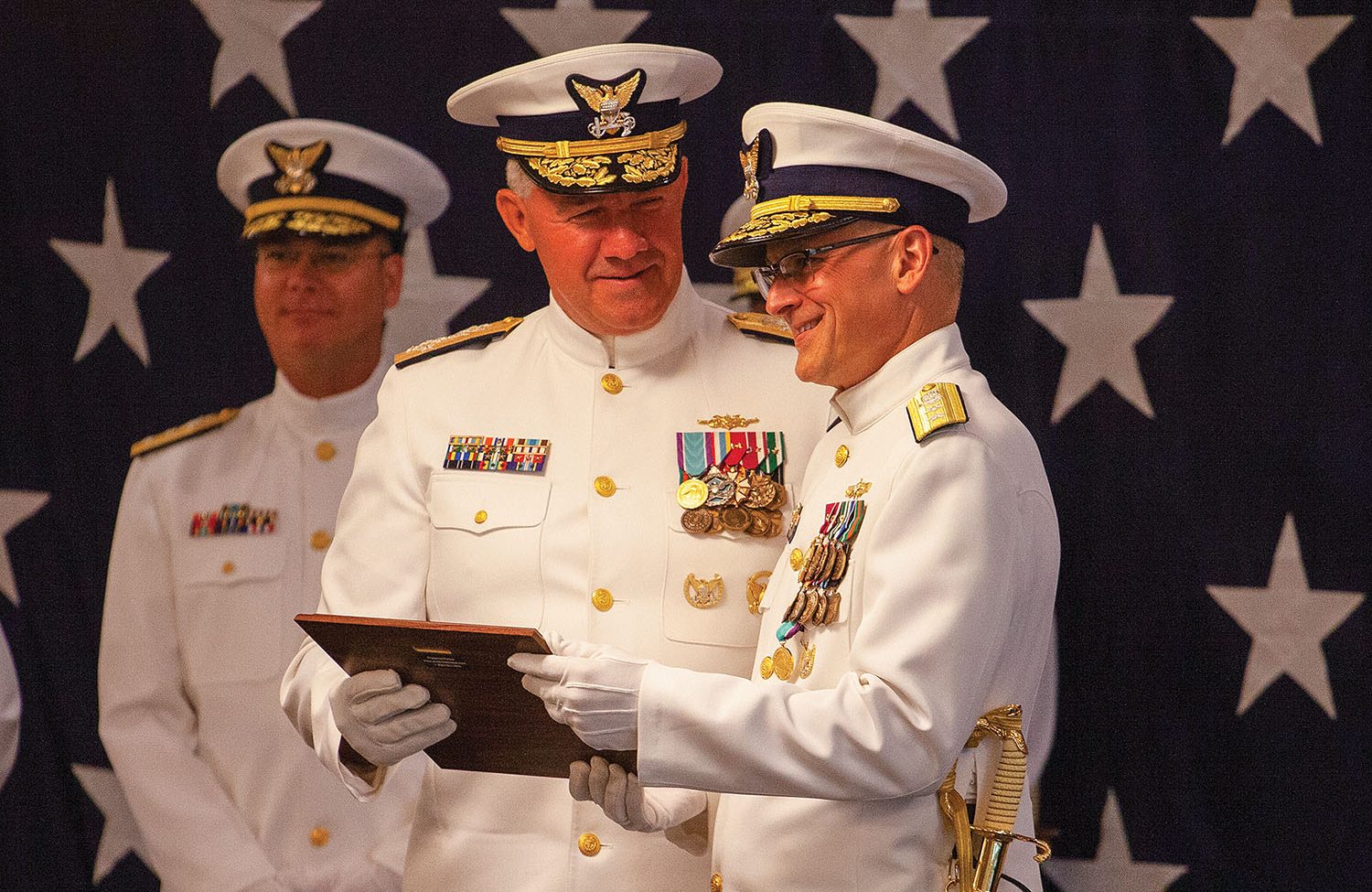 The Eighth Coast Guard District held successive ceremonies June 25, with the first installing a new commander to lead the Heartland region and the second marking the start of a long-tenured rear admiral’s retirement.

During the change-of-command ceremony, Rear Adm. John Nadeau transferred command of the Eighth District to Rear Adm. Richard Timme, who arrived to the New Orleans-based district from Coast Guard Headquarters, where he previously served as assistant commandant for prevention.

Now commanding the Eighth District, Timme leads all Coast Guard operations across 26 states, including those that comprise the Mississippi River Valley and the states and waters that form the coastline of the Gulf of Mexico. The Eighth District encompasses more than 11,000 miles of inland waterways, including the Mississippi, Ohio, Illinois and Tennessee river systems and the Gulf Intracoastal Waterway, and has a workforce of more than 7,000 active duty, reserve, civilian and auxiliary personnel.

A native of Connecticut and a 1991 graduate of the U.S. Coast Guard Academy, Timme previously served as commander of Coast Guard Sector Ohio Valley and commander of Marine Safety Unit Pittsburgh. He also served as deputy incident commander and the federal on-scene coordinator representative in Mobile, Ala., during the 2010 Deepwater Horizon oil spill response. Timme’s other assignments include stops in Marine Safety Offices in Tampa; Portland, Maine; and New Orleans.

He relieved Nadeau, who took over command of the Eighth District in June 2019. A 32-year veteran of the Coast Guard, Nadeau is a 1989 graduate of the U.S. Coast Guard Academy. Prior to his two years at the helm of the Eighth District, Nadeau served as assistant commandant for prevention policy and assistant commandant for capability. He also previously served as commanding officer of both the Coast Guard Marine Safety Center in Washington, D.C., and Marine Safety Unit, Wilmington, N.C. Prior to that, Nadeau served as the chief of inspections for Marine Safety Office Corpus Christi, Texas; the senior investigating officer at Activities Baltimore; and chief of the Office of Design & Engineering Standards at Coast Guard Headquarters.

The change of command ceremony was marked by comments, not just from Nadeau and Timme, but also from Adm. Karl Schultz, commandant of the Coast Guard, and Vice Adm. Steven D. Poulin, commander of Coast Guard Atlantic Area.

Poulin, while welcoming Timme and thanking Nadeau, was sure to stop and thank Nadeau’s family for their support while he led the Eighth District.

“I want to start by thanking John’s wife, Karen; sons, J.T. and Jacob; and daughter, Nicole, for their support,” Poulin said. “We worked John incredibly hard these past two years. That’s an understatement, I know. He was able to accomplish the things he did here in the Eighth Coast Guard District and throughout his career because of your support.”

“You had to move five times while you were here in New Orleans,” Poulin said. “I think that’s a record for a district commander.”

Poulin then welcomed Timme back to New Orleans and cautioned to his wife and children that “we’re going to work Rich equally as hard as we worked John.”

“The only consolation I can offer you is that what you will be doing is strategically important for our nation,” said Poulin, who later added, “Cherish the privilege of command and cherish being down here in the Eighth Coast Guard District.”

Timme took time to directly address the men and woman of the Eighth District who he is now leading.

“The reputation for leadership in crisis precedes you,” Timme said. “For mission excellence, for partnership and  for unity of effort across 26 states.”

Timme added that he is also passionate about that mission and excited to be part of the Eighth District team again.

“Safety, security and stewardship are our enduring roles and our core values that anchor us,” Timme said.

Timme committed to carry on the district’s orders and mission, while growing “a culture centered on respect, a culture of equitable treatment across a diverse workforce, a culture of partnerships based on that culture of respect that leads to unity of effort.”

Following the official change of command from Nadeau to Timme, Schultz took to the podium to honor Nadaeu as he began his retirement from the Coast Guard. Schultz looked back at Nadeau’s career spanning more than three decades.

“What I’ve always respected about John the most was his authenticity, his character and his integrity,” Schultz said.

And those three characteristics were important, particularly during Nadeau’s two years leading the Eighth District, which saw historic flooding in 2019, hurricanes in 2020 and the global pandemic. Through it all, Coast Guard Heartland soldiered on.

“The Eighth District did not come to a stop,” Schultz said. “It’s just too important, too critical. People stood the watch during this past year of challenge.”

Nadeau recounted some of his favorite memories from his years with the Coast Guard. He mentioned getting to know the maritime industry during his time serving in Corpus Christi. He also recounted the story of a crew member aboard a foreign-flagged vessel passing him a note as he boarded the vessel for inspection.

“It said, ‘Very bad ship. Flooding in engineroom. Need help,’” Nadeau said. “That doesn’t usually happen when you board a ship.”

Nadeau said the Coast Guard team did find extensive hull integrity issues with the vessel and later uncovered a culture of dodging safety and environmental regulations.

“The DOJ was helpful with that,” Nadeau quipped.

Nadeau said that experience highlighted the fact that, while the vast majority of mariners and vessel owners operate safely and with integrity, the Coast Guard’s unbiased mission of inspection and enforcement of regulations is nonetheless critical to safety on the waterways.

“I truly enjoyed working with the maritime industry, trying to achieve our common goals and objectives, because they are common,” Nadeau said. “As some of you have heard me say before, I really believe the U.S. has this gift, this waterway, all these rivers, these 360 ports, the unfettered access to two of the world’s deepest oceans. It is a gift to our nation and it defines who we are, because without it we would not be the same.

Nadeau said he’s been honored to help preserve and protect that gift and to work alongside the mariners that make it productive.

“That gift—that system, those waters and all—it only produces because of the people that work on it,” he said. “That’s the pilots, stevedores, the longshoremen, facility workers, port operators, agents, all the essential workers, and of course, the mariners, the seafarers out there, who ensure ships and cargoes move safely every second, every day, 24 by seven by 365.”