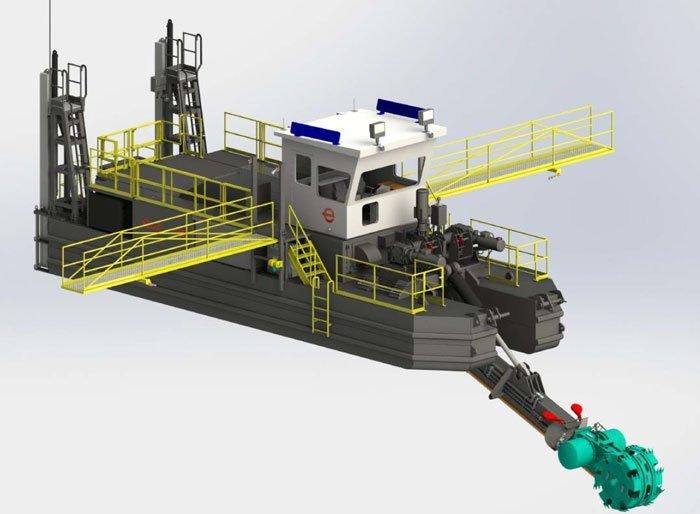 Baltimore-based Ellicott Dredges has been awarded a contract to build a custom electric, stainless steel bucketwheel dredge for a Canadian potash producer. According to Ellicott, the hull, deckhouse, ladder and other structural members will all be built using 316 stainless steel.

The B590E Wheel Dragon dredge will feature an Ellicott 100 hp. dual wheel excavator; both 500 hp. and 250 hp. electric motors; custom structural, electrical and hydraulic systems designed with maintenance and safety in mind; a control system with RTK GPS; and UPS and transfer switches for short-term and long-term backup power for key systems.

The announcement is just the latest news from Ellicott, which has had a busy start to 2021. The company also reported that the Ohio Department of Natural Resources has purchased a new 12-inch Ellicott 460SL Swinging Dragon dredge for maintaining Buckeye Lake. The new 540 hp. dredge, with a 50 hp. cutter, will feature extra-wide side tanks, utilize biodegradable hydraulic fluid, and work in depths up to 20 feet. The dredge will join one of the department’s other dredges, the dredge Buckeye, which is a 1960s Ellicott dredge.

So far this year, Ellicott has delivered a 14 dredges and booster pumps to 11 different customers in five countries. Nine of those shipments were Ellicott’s Dragon Cutter Suction dredges, ranging in size from 10 inches to 20 inches.

The company has also shipped five booster pumps, including its new 20-inch Tier 4 booster pump, which is rated at 1,125 hp. One of those boosters is working in support of the Baltimore Engineer District’s Poplar Island restoration project within Chesapeake Bay in Talbot Country, Md.

Ellicott maintains its headquarters and a manufacturing facility in Baltimore. The company has a second production facility in New Richmond, Wis.