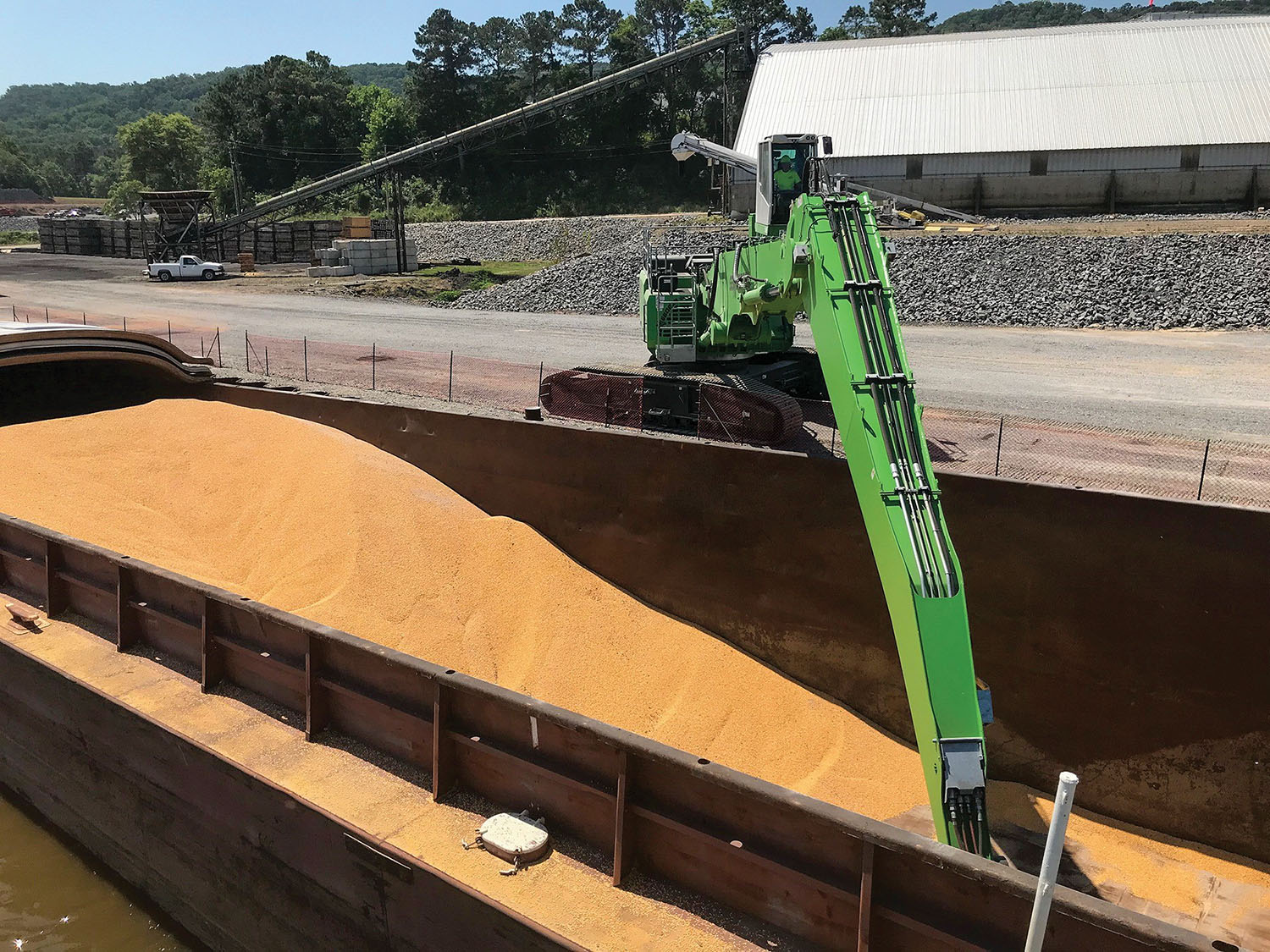 As president of Guntersville Marine Services Inc., Mike Lueken is keenly aware of the dramatic changes in material handling equipment over the past 30 years.

“The evolution of material handlers has gone so much faster than what we’ve seen on the automotive side,” he said. “Thirty years ago, every terminal was loading and unloading with a cable crane and a clamshell bucket. Then, we went through some smaller hydraulic excavators. We feel very fortunate with this purchase that, once again, we’re on the cutting edge and looking forward.”“This purchase” is the Sennebogen 860 R-HD material handler that was recently commissioned for Guntersville Marine’s terminal at Mile 358 on the Tennessee River. The 860 is a giant 192,900-pound purpose-built material handler mounted on a crawler undercarriage. Powered by a 350 hp. Cummins engine, the boom and stick on the 860 can reach almost 60 feet across and into the barges. It can lift at least 10 tons in any direction.

“We were impressed with the fact that it is a material handler, built and designed that way,” Lueken said. “We looked at a variety of pieces to add to our terminal but, after looking at all the options, Sennebogen was the clear choice. We chose it for the versatility and the economy it brings to our operation.”

Lueken said he has no trouble keeping the big green machine busy. Guntersville Marine is a full-service terminal providing loading, unloading, fleeting, switching and storage services. “We handle a high percentage of the barges on the river,” he said. “We’ll have upward of 100 barges up here at any given time. Of those, 60 will be here for loading, 35 for outbound tows, plus some bound for other customers in the area. The majority is discharged here, which is what led us to purchase the Sennebogen.”

The long reach of the 860 was a compelling feature for the Guntersville terminal. “The long reach lets you get all the way over to the other side of the barge, to the outside wall and move the material directly to truck or conveyor,” Lueken said.

“If we have a barge filled with some agricultural product and we are transferring from barge to truck, often times you’ll get to that position where you either have to move your material handler along the dock wall or move the barge. If our push boats are busy, we would have to wait on that movement to be completed before we could continue production. With this Sennebogen, it has the reach so we don’t have to move anywhere near the frequency that we did before—if at all. With a skid steer in there to move the product from the end of the barge, we can maintain the fast lifting cycle of the 860 without repositioning,” he said.

Unlike similar machines, Sennebogen material handlers are built on a square footprint, with the slewing ring exactly centered on the platform. As a result, the load limits are the same through 360 degrees of swing.

It’s a difference that operators noticed right away.

“They love the balance of the machine,” Lueken said. “It gives them the confidence to be able to lift in all directions without worrying about the length of the reach from side to side on the barge or for placing the load on the dock or into a truck. That’s a huge advantage.

“We run a very safe operation. Safety:  that’s what comes first. They have a great line of sight, and the operator doesn’t get distracted because he feels uneasy with the extended reach. All of that has been totally eliminated.”

“The other thing we’ve learned is the value of the ability to quickly change the attachments on the equipment,” Lueken continued. “Whether we’re using one of the clamshells, a hook or forks, time is money, and we aren’t wasting any time. We even have a 25 kW generator onboard so we can switch to a magnet. We now have our own version of a Swiss Army Knife!

“Given the cycle times and the flexibility we have, we can shave off 20 percent of our unloading time, depending on the product,” he said. “The speed and versatility have increased the capacity and capability of our facility.

“We touch the water loading and unloading barges at six different places in this terminal, but the Sennebogen is a piece that we use most frequently now.”

The 860 is one of Sennebogen’s new “Green Hybrid” models, featuring a unique energy recapture system. A large hydraulic cylinder, centered between the booms’ two lift cylinders, uses the weight of the boom on each downstroke to compress inert gas into storage cells at the rear of the upper carriage. On the next upstroke, the compressed air drives hydraulic fluid back to the recovery cylinder to assist in lifting the load.

The system is ideally suited to applications with frequent “up and down” cycles, such as barge loading. This process typically reduces the machine’s fuel consumption by about 30 percent.

Lueken said he looks forward to seeing the effect on his operating costs. “Diesel prices have been fluctuating, and we had that fiasco with the pipeline, so we haven’t yet been able to do a detailed analysis,” he said. “But so far it looks favorable. The savings on fuel are and were certainly an incentive for us to buy a Sennebogen.”

The capabilities of the machine are only as good as its reliability, but Lueken has no concerns there, either. “We started operating the 860 in the first week of April 2021,” he said. “The commissioning, service and orientation were very smooth. I can’t say enough about Tractor Equipment Company (TEC). They are doing all the service. It’s changed a lot from 30 years ago, when everyone did their own service.”

The terminal had worked with the dealer in the past with previous purchases of Komatsu equipment. “TEC has been great to work with, Lueken said. “They understand that if the machine’s not running, it’s costing us money. They’ll be out here soon for the machine’s first 250-hour service. Looking forward, we’re definitely looking at Sennebogen on a replacement basis.”

Caption for top photo: Operators feel more confident with every lift because of the 860 R-HD’s center of balance with equal load limits through 360 degrees of swing. (Photo by TJ Joyner, courtesy of Sennebogen)