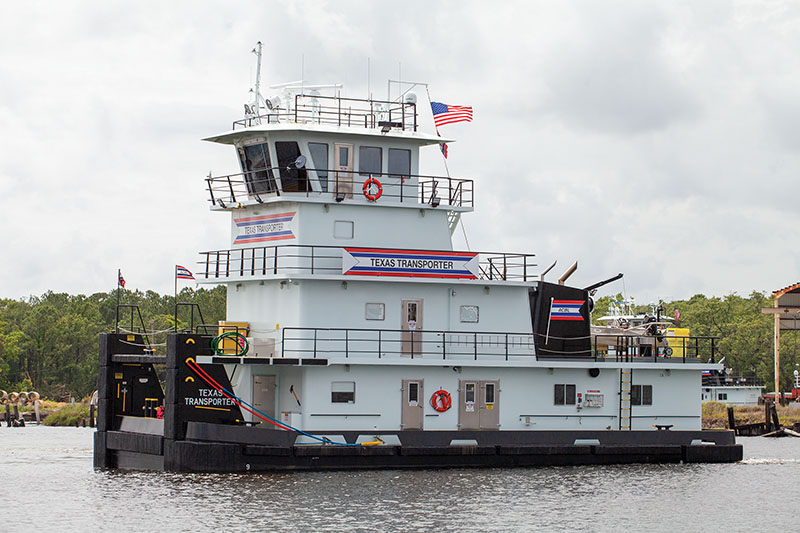 “These will support our liquids business and fleeting operations in the Houston Ship Channel in the coming years,” said Bill Foster, senior director of boat maintenance for ACBL. “Houston is an extremely customer-focused location for ACBL, and new and highly reliable equipment is very important here. ACBL is looking to continue to upgrade our fleet and equipment to meet the needs of our teammates and customers for the long haul.”

The mv. Texas Transporter measures 67 feet by 30 feet, with a depth of 11.4 feet. The vessel is powered by a pair of Cummins QSK-19 main engines that produce a combined 1,600 hp. The vessel’s two Veth VZ-700 Z-drives are enclosed in Kort nozzles. Ship service power comes from a pair of 65 kW Northern Lights generators. The Texas Transporter has accommodations for seven crew members.

The slightly smaller mv. Houston Honor measures 65 feet by 28 feet, with a depth of 10 feet. That vessel’s two Cummins QSK-19 main engines produce a combined 1,200 hp. Main engines are paired to Veth VZ-550 thrusters with open wheels. The Houston Honor also carries a pair of Northern Lights 65 kW generators. The vessel will serve as a day boat for ACBL and, thus, has no staterooms.

Foster said ACBL designed and equipped both vessels with their Houston areas of operation in mind.

“The simplicity of the design and heavy construction of these [Veth] drives make them a fantastic match to our operating environment,” Foster said. “The fleeting locations of Houston run quite shallow in spots, so the drive on the Honor is smaller and, without the Kort nozzles, should be less likely to pick up debris.”

Foster said that, while it’s too early to have long-term data on the operational profile of the Texas Transporter and Houston Honor, particularly with regard to the Veth Z-drives, he’s nonetheless confident in their performance.

“Based on our experience with the other Z-drives in our fleet, we expect to see significant operational cost savings and productivity enhancements,” he said.

With a fleet of more than 3,500 barges and close to 150 towboats in service, ACBL moves a wide range of liquid and dry cargoes throughout the inland waterways of the United States. The company operates fleets in Houston, Mobile, Ala., and along the Lower Mississippi River in Louisiana. ACBL, headquartered in Jeffersonville, Ind., also maintains a terminal in Memphis, Tenn., along with a fleet operation in Cairo, Ill.