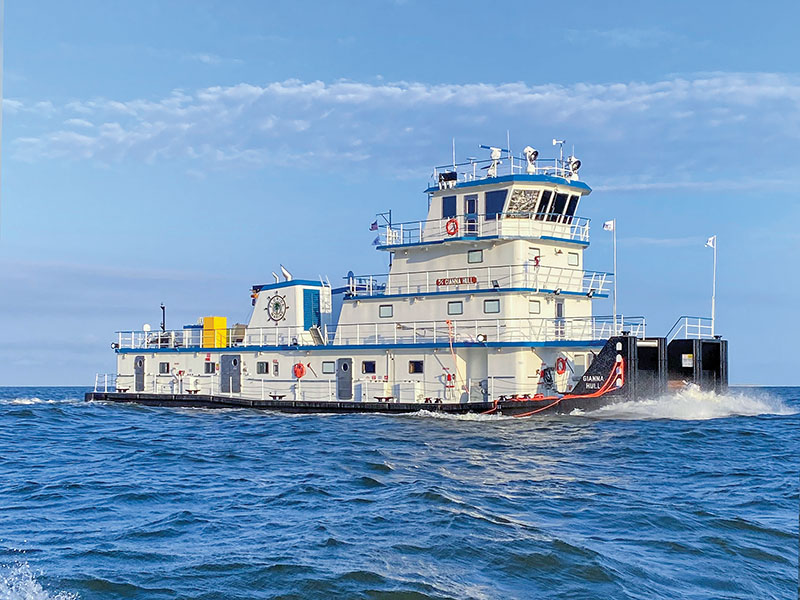 The new towboat is the third delivery in a three-vessel contract with FMT announced in late 2018, following Metal Shark’s acquisition of the assets of Horizon Shipbuilding earlier that year. With the purchase, Metal Shark, best known as a builder of welded aluminum vessels, assumed ownership of a fully developed Alabama shipyard and began its expansion into steel shipbuilding, refit and repair.

“The Metal Shark Alabama team has enjoyed working with FMT, and we’re proud to conclude this three-vessel production run with the delivery of the Gianna Hull,” said Doug Barrow, vice president of Metal Shark Alabama. “The pandemic posed some challenges, but we were able to keep our projects moving forward by working together and looking out for each other. I believe that deep mutual respect and understanding were forged between our team and FMT’s representatives through our close cooperation, and through continual process improvement we were able to show an increase in efficiency with each consecutive build. I know these vessels will serve the FMT fleet well, and we would gladly build with FMT again.”

“Today we celebrate the three-year anniversary of Metal Shark Alabama with the successful delivery of our third towboat for Florida Marine Transporters,” said Metal Shark CEO Chris Allard. “I’d like to thank FMT owner Mr. Dennis Pasentine for his support and his trust in us as we launched our newest shipbuilding facility. Over the past three years we have seen our Alabama yard flourish with a succession of impressive new builds and growing activity in the refit, repair and conversion business, as we take on increasingly complex hull lengthening and vessel conversion projects. I’d like to congratulate all of our Alabama employees on their success and thank them for their commitment.”

The Gianna Hull, named after Pasentine’s granddaughter, is actually the third towboat of that name built for FMT; the first one, built by Horizon in 2014, was eventually sold to Marathon Petroleum Company and renamed Martinsville. The second, built by FMT Shipyard in 2018, was sold to Marathon before it entered service; Marathon renamed it Kenova.