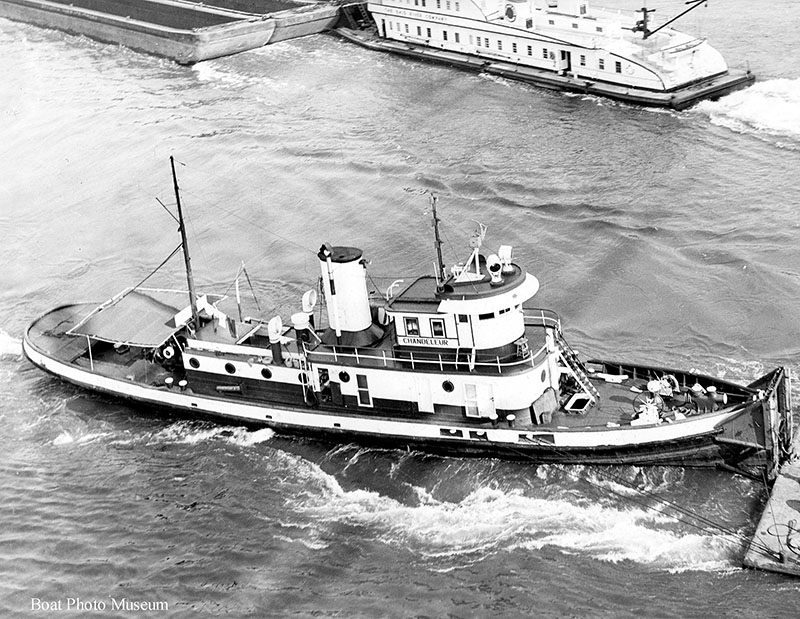 We will take a break from the evolution of the diesel towboat with this writing, in order to present a subject perhaps more compatible with this special Gulf Intracoastal issue of The Waterways Journal.

The vessel featured this week is another built by the Howard Shipyard & Dock Company of Jeffersonville, Ind. That being said, this type of craft was somewhat different from the graceful packets and sturdy towboats that had traditionally been built by that firm for use on the Western Rivers.

In 1897, while the Howard yards were turning out packets such as the Sunrise and Tennessee, as well as the towboat Dolphin No.3 (later to become the Harry Anderson and Julius Fleischmann), and more than a year before the legendary packet Kate Adams slid down their ways, a diminutive tug was completed for the St. Louis & Mississippi Valley Transportation Company of St. Louis.

The boat was named Henry C. Haarstick, and Way’s Steam Towboat Directory states that it was named for the president of that firm.

According to Way’s, the Haarstick was 115 by 22 by 8.5 feet, and was steam-powered by a 20–24-inch stroke engine. It was equipped with a steam steering rig and swung a single propeller 96 inches (8 feet) in diameter. A photo of the boat new at Howards shows a striking resemblance to the tug Susie Hazard, which had been operating at St. Louis since 1891, and since the Haarstick was built for another St. Louis firm, one must wonder if it may have been modeled somewhat after the Hazard. There are also a lot of similarities between the Haarstick of 1897 and the vessel we featured last, the Howard-built J.J. Hennen of 1928.

An interesting anecdote shared in the Way’s Directory says that its trial trip was on Friday, April 16, 1897. The Howards had advised against trials being run that day, “because of the old taboo on starting out on a Friday.” The owner’s representative insisted, and the boat headed downstream. Then, while rounding to at Louisville, the tug struck a barge when the engine failed to reverse.

At any rate, it served at St. Louis for the next 29 years. By 1926, it was shown as owned by Meyer Katz, St. Louis, and in December of that year it was towed to New Orleans by the Inland Waterways Corporation (Federal), having been sold to Whiteman Brothers.

In 1928, the tug was rebuilt and converted to diesel, then named White Water. It first appears in the Inland River Record 1946 edition, and it is shown as being owned by Coyle Lines, New Orleans, named C.F. DeBardeleben and powered with a 735 hp. Cooper-Bessemer diesel. In the 1952 edition, it carries the same name, still listed as owned by Coyle Lines but shown with a Fairbanks Morse diesel of the same horsepower. In the combined 1953-1954 edition of the IRR, the boat is listed in the “Off The Record” section, with the notation that it sank on December 22, 1952, and was declared a total loss. The listing further states that the wreck had been raised and acquired by Alexander Shipyards, New Orleans. The C.F. DeBardeleben reappears in the 1956 edition, now owned by Indian Towing Company, New Orleans, and having a GM engine of 900 hp.

On September 27, 1955, Russell Lintner of Pittsburgh photographed the boat as it was upbound at that city. It would be a frequent visitor to the Upper Ohio River for the next several years. The Lintner photo of 1955 shows a vessel quite different from the Haarstick of 1897. The wooden cabin and pilothouse are gone, replaced by a more modern steel cabin with a blue-water tug type pilothouse with a curved front. Bulwarks have also been installed on the main deck, as well as an improvised set of towknees. This cabin transformation may have happened in the 1928 rebuilding, or more likely in the rebuild following the 1952 sinking. It is also interesting to note in the 1955 photo that it has no radar. In subsequent photos taken by Lintner at Pittsburgh in 1956, the boat is sporting a radar scanner.

In 1957, Indian Towing renamed the boat Chandeleur. It continued its trips to the Upper Ohio, being photographed in Lock 41 (present day McAlpine) at Louisville and by Roger Harper at Monaca, Pa., both studies undated. The Harper photo is taken from the Monaca-Rochester Bridge and looks down to show how the model bow tug with attached towknees had to be laced in to the barges being towed.

Dan Owen shot a photo of it upbound at his hometown of East Liverpool, Ohio, on September 25, 1958. Capt. Frederick Way, Jr. noted it in his foreword to the 1962 edition of the Inland River Record by stating that the IRR policy was to “include all commercial and government owned vessels concerned in towing … which are likely to penetrate into the Mississippi above Baton Rouge, or to get above the Mobile River.” He then mentioned a listing for a former New York vessel that had relocated to Memphis and went on “… and continue listing the rakish Chandeleur of New Orleans now well known to the headwaters of the Ohio. It used to be—remember?—when it took a towboat to handle barges.”

Dan Owen took a final photo of the Chandeleur on what he stated was the last time he saw it, September 4, 1964, this time downbound above Liverpool, Ill., on the Illinois River. As it passed through St. Louis, I wonder if anyone there remembered it from its days as the Haarstick? Owen, long-time editor of the Inland River Record, has noted that the Chandeleur was dismantled in October 1967. The Inland River Records from 1958 on show the boat as having originally been named Henry “A.” Haarstick, rather than Henry “C.,” yet other documents reference it with a “C.”

Several friends have mentioned it over the years, most noting what an odd appearance it made while visiting the upper reaches of the Western Rivers. Capt. Clarke C. “Doc” Hawley once related to me the story of an altercation with the Chandeleur in the vicinity of Henderson Island, at Henderson Ky., on the Ohio River once when he was aboard the Delta Queen. He thought that the DQ’s stage was going to rip the visor off the Chandeleur’s pilothouse.

Others affectionately referred to it as the “Shandy.”

This venerable, well-travelled vessel lasted 70 years, extending from the age of steam well into the modern diesel era. Single-screw and with but one steering rudder and no flanking rudders, it is assumed that it would have been better suited for its time in the Gulf area, yet some 40 years of its existence were spent on the rivers.