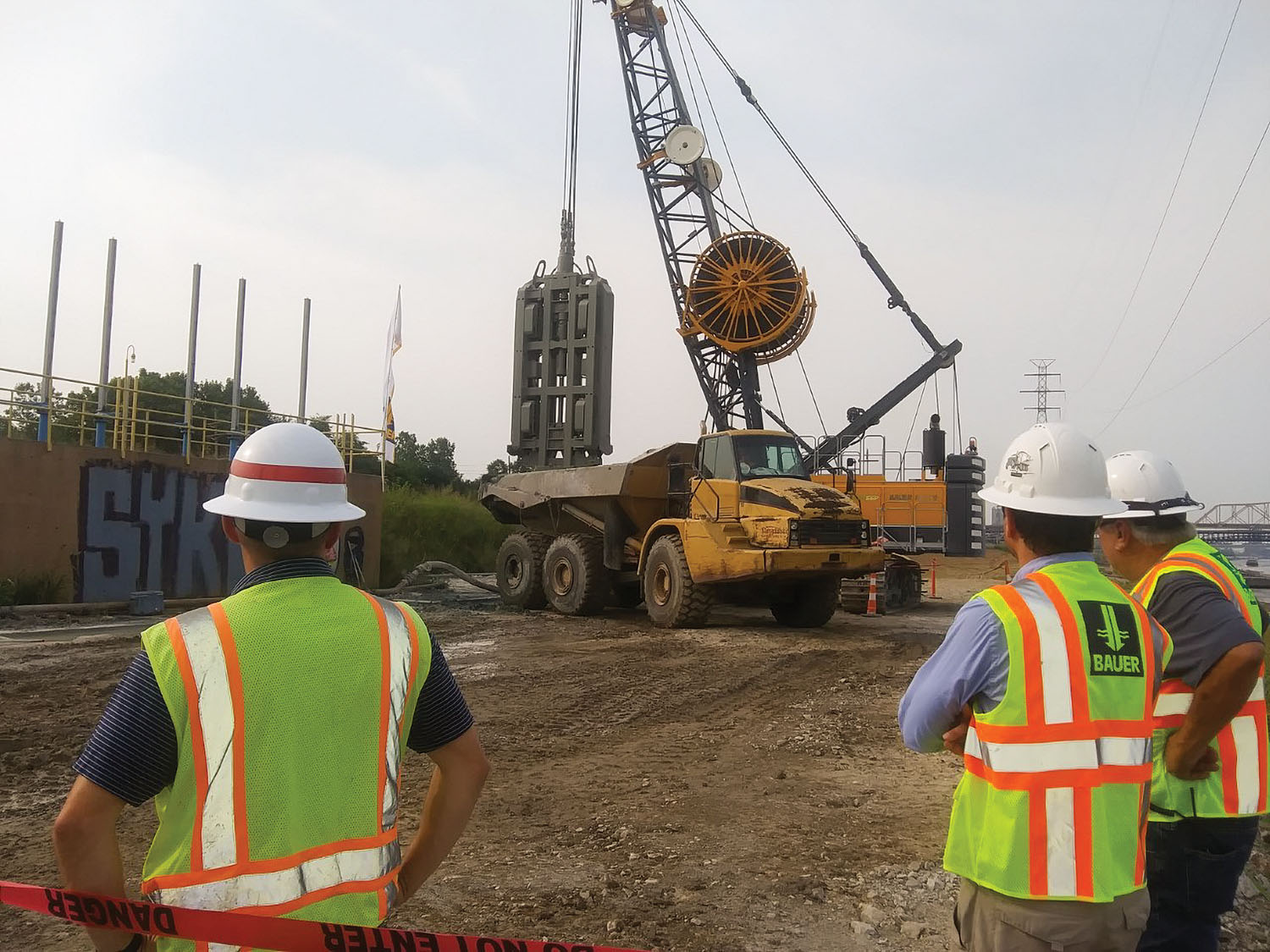 St. Louis is home to famous landmarks, many of them engineering marvels, like the Gateway Arch, Union Station and Eads Bridge. It will soon be the proud site of another engineering marvel, but one that won’t be visible. “This is one of the biggest infrastructure projects St. Louisans will never see,” said Col. Kevin Golinghorst, commander of the St. Louis Engineer District.

Golinghorst was speaking at the project site of the East St. Louis cutoff seepage wall project. The reason St. Louisans won’t see it is that it will be completely underground, doing its job of protecting the levees on that side of the river from under-seepage and sand boils.

When completed by the fall of 2022, this particular cutoff wall will be the largest, deepest project of its kind, going deeper than any similar project and using specially designed equipment. It will extend 4,600 feet parallel to the existing levee, or about 3/4 of a mile, on the Illinois side of the Mississippi River just to the north of downtown St. Louis. The project is about 75 percent complete now. “A cutoff wall in this type of riverside setting has never been done before,” said Eric  Piel, the Corps’  project engineer for the project.

The St. Louis District began construction on the cutoff wall seepage barrier in the Metro East Sanitary District levee system in 2019 to help reduce the risk of levee failure during a 500-year flood event. The site was chosen after extensive research and modeling because of the particular characteristics of the subsoil, Piel said. In its storied history, the Mississippi River changed its course frequently, leaving some of its banks composed of old riverbed with sandy, silty subsoils more prone to seepage than more compact clay soils.

The contractor is Bauer Foundation Corporation, the American division of Bauer Group, an international engineering firm based in Germany that specializes in projects dealing with ground and groundwater. With 110 subsidiaries, Bauer operates on every continent around the world. Among its many well-known projects, the foundations of the world-famous Burj al-Khalifa Tower in Dubai were built by Bauer. The firm has worked with the Corps many times previously, said project manager Matteo Bertoni, and is currently involved in several major Corps projects, including the Herbert Hoover Dike Rehabilitation Project in Lake Okeechobee, Fla.

Bauer designs and builds all its own equipment, which it also sells. Two large pieces of equipment, Bauer MC-96 rigs, were at work in East St. Louis on the morning of July 29. One is in a hydro-cutter configuration and one is in a hydraulic clamshell configuration. The hydraulic clamshell removes the overburden above bedrock. The hydro-cutter can not only dig through overburden but can also excavate bedrock by milling.  Both pieces of equipment typically run concurrently, requiring safe and well-thought-out planning. Walter “Butch” Logsdon, the site safety and health officer, oversees project safety, a fundamental part of all Bauer projects.

The team uses the “single phase panel” method, Bertoni said. The bedrock at this location is about 138 feet below surface level; the cutter digs down into bedrock itself to a depth of 2 feet. A proprietary slurry mixture is used as the excavation fluid. Once the design bottom is reached and a panel is complete, the slurry and soil mixture remains in place and cures to become the final cutoff wall product.

Some of the milled rock remains in the slurry, Bertoni said. Clay Collard, the quality control manager, is in charge of making sure that the cutoff wall meets the stringent requirements of the project.

Besides the soil type, the location of a lot of important infrastructure behind the levee also helped determine the project site, Piel said. Electric utility Ameren has a power line tower in the project area, and some panels have incorporated sealed “windows” for culverts or water intake tunnels.

The location has a unique combination of a deep bedrock and high water table, Piel said. The project is so new and innovative that the Corps will be monitoring it with sensors to gain data for use in other projects. When high water stresses the system, the sensors will show “hot spots” and help Corps planners figure out the most effective—and cost-effective—ways of using seepage walls at pressure points to protect levees and infrastructure.

The project is on track for completion between September and November of 2022. Surprisingly, the COVID-19 restrictions only caused a delay of about a month. Piel said, “These machines are very specialized and require specialized operators from overseas. We had trouble getting some of them into the country during the lockdown.”

The project is cost-shared between the federal government, the Southwest Illinois Flood Prevention District Council and local levee districts, of which there are 65 in the St. Louis District’s 300-mile area of responsibility.

Caption for photo: Members of the project team for the East St. Louis seepage wall project look on as a Bauer MC-96 rig in a clamshell configuration removes subsoil on the east bank of the Mississippi River just north of downtown St. Louis. The seepage wall, due to be completed in the fall of 2022, is the largest project of its type and will protect the levee system against under-seepage. (Photo by David Murray)