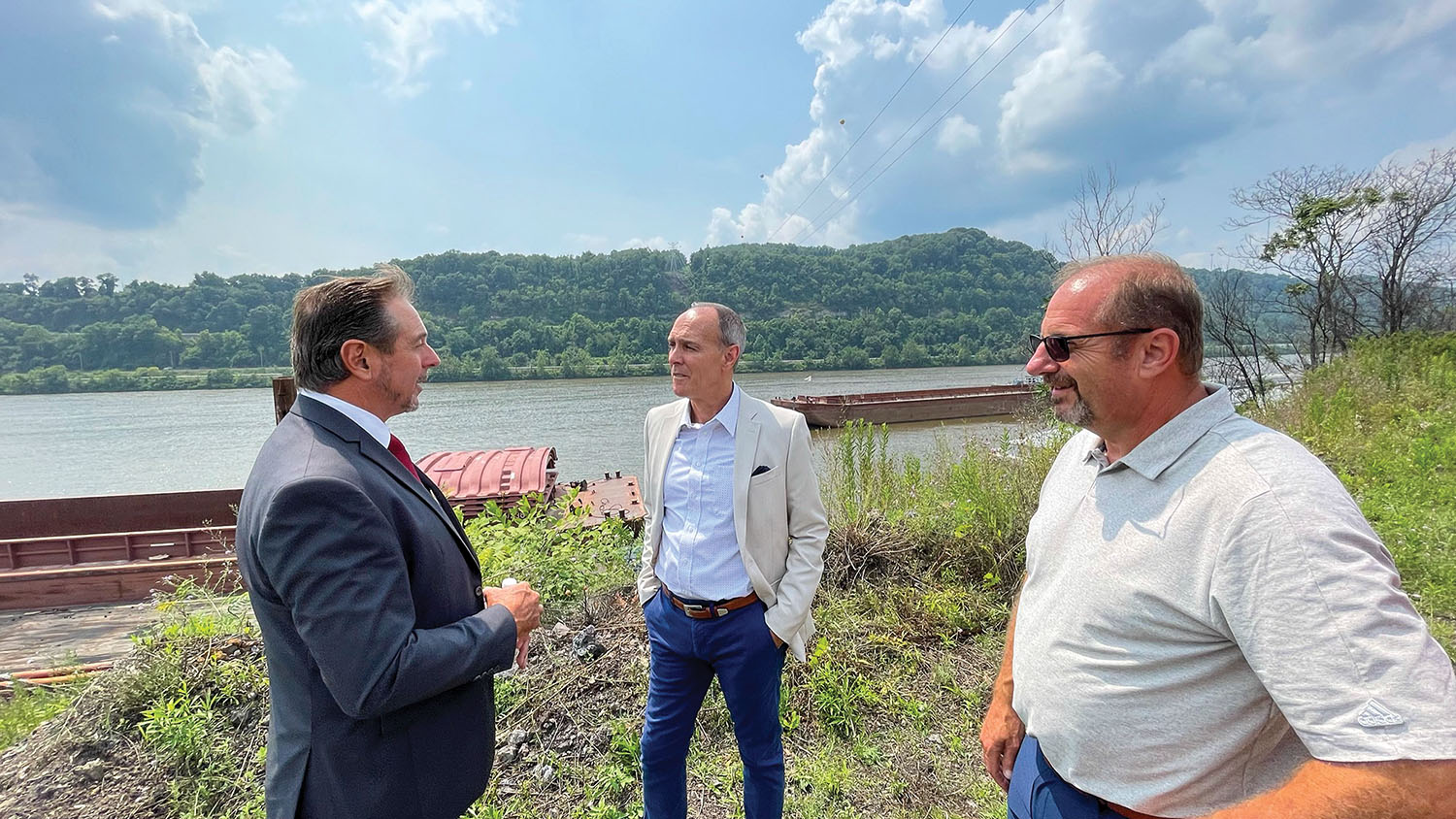 Empire Diversified Energy is developing the Port of West Virginia, a multifunctional, transmodal inland port terminal on the Ohio River in the city of Follansbee.

The company’s wholly owned subsidiary, Empire Trimodal Terminal LLC, received permission to use the name this spring after completing an extensive feasibility study with the state of West Virginia. Empire has already laid out close to $60 million in capital investments in the property.

Port developers believe the Port of West Virginia could be a hub for shipping goods throughout the Midwest. It is designed to be a public port of more than 1,000 acres with roughly 5 miles of rail and more than 8,000 contiguous feet of river frontage, said Scotty Ewusiak, president of Empire Diversified Energy. The port project includes several different ventures.

Empire initiated the project with the sale of $26 million in tax-exempt bonds issued through the West Virginia Economic Development Authority December 1 for dock and wharf facilities. That laid the foundation for the expansion of the Trimodal Terminal property at Ohio River Mile 70. The property was the site of a Wheeling-Pittsburgh Steel and RG Steel mill in past decades.

The build-out of a breakbulk container terminal on the south terminal property is underway, with engineering and permitting processes advancing and earth-moving beginning, Ewusiak said.

On February 17, another of Empire’s wholly owned subsidiaries, Petro Empire Liquids and Storage LLC, completed the $4 million purchase of the 32-acre former Koppers Inc., chemical plant facility, which had previously been used to distill coal tar and refine naphthalene. It is located just north of the Trimodal Terminal property.

Empire also spent $20 million to acquire 690 acres of property for a state-of-the-art solid waste recycling project. It closed on a  $20 million bridge loan with Principal Street Partners earlier this year to provide funding for it. The state of West Virginia has approved the issuance of up to $50 million in solid waste bonds.

Additionally, Empire is planning  to build and will operate an eco-friendly pig iron plant, anticipating construction beginning at the site next year. Pig iron is an essential component in the steel-making process.

In Empire’s presentation to state economic development officials, the company noted it currently has 50 employees and expects 200 or more additional employees will be hired in the next 18 to 24 months, with new businesses and hundreds of more indirect jobs created as a result.

Ewusiak said Empire plans what he called “a full-service facility.” It will include a bulk and breakbulk containers terminal, heavy-lift pad, roll-on/roll-off dock,  container storage, liquids transfer and storage, climate-controlled storage buildings and available office space. The port will have the capability of offloading breakbulk shipping containers, dry goods, aggregate sand and liquids as well as having its own on-site facilities for frac water and wastewater treatment, he said. It will have 6 million gallons of liquid storage capacity, Ewusiak said. The heavy-lift capabilities are part of Empire’s partnership with Fagioli Inc. and will allow lifting cargo of up to 1,500 tons per pick.

The port is already servicing multiple customers from the site, even as planning for the additions is underway. Empire is active in offloading metallurgical coal and loading coke for shipping both domestically and internationally. It also does business in scrap metals and limestone aggregates and is pursuing opportunities in the agricultural market.

Project manager Chip Fenske said teams are finishing the engineering and design work for the first 3,600 feet of the sheet-pile wall at the terminal while also beginning efforts to recruit tenants for the improved facilities.

He noted that the port also has developed relationships with ports in the Southern region of the United States. Those port officials have been in discussion with the Port of West Virginia about relieving some of the stress on container shipment imports from overseas by shipping some cargo containers to West Virginia by barge, he said.

“We’re pursuing it hard,” Ewusiak said of a regular container-on-barge shipment service on the Ohio River. “We’ve already talked to some customers.”

Empire CEO Frank Rosso, in announcing the port’s name change earlier this year, also talked about the importance of container shipments to the port.

“The completed expansion of the Panama Canal has seen oversize Post Panamax ships (24,000 containers) coming into   the United States  every day,” Rosso said in a news release. “This expansion has created a need for new inland water terminals to accommodate this increasing traffic and assist in distribution. We believe Empire, through the Port of West Virginia, is perfectly positioned to take advantage of this opportunity, both in terms of inbound and outbound container movement.”

Port Director Joe DiBartolomeo said the port also is positioned in an ideal location with access to major highways, including the new segment of Pennsylvania Turnpike 576. It is also 20 minutes away from the Pittsburgh airport, two hours from Cleveland, Ohio, two hours from Columbus, Ohio, and near an area where Amazon is building warehouses.

“They need mobility,” DiBartolomeo said of the businesses, “and this port offers direct access to rail, water, highway and close proximity to the Pittsburgh International Airport.”

Empire has requested $42 million in infrastructure improvements from the state of West Virginia. That includes: $25 million for initial portions of a sheet-pile wall, roll-on/roll-off dock, heavy-lift pad and apron; $10 million for a terminal, service road, cranes and buildings; $2 million to relocate power lines underground; $3 million for rail spur design and installation; and $2 million for lighting, fencing and security systems.

Company officials also spoke about the need for the refurbishment of the Follansbee-Steubenville Railroad Bridge, estimated to cost $20 million.

Following his visit to the port with other state economic development officials, Carmichael said his attention was caught by all the planning that had gone into the port, along with all the money Empire has already invested in it.

“They have put together a whole portfolio and package of a really thoughtful design,” he said.

He said he was told the facility expects to be able to employ 300 to 400 people on an ongoing basis, with more during construction. It will have long-term benefits not only for West Virginia, but also surrounding states in the region, he said. He also noted that it would be a good fit for the region’s unemployed industrial workforce.

“As they contemplate expansion and building out of that facility, they can use it for so much: river traffic, rail traffic and a transportation intermodal component for that entire region,” Carmichael said. “As we look at opportunities to create jobs and progress in and around West Virginia, we were very impressed with the amount of private capital that has already been invested in this project.”

He said he believes the state is well positioned to help with these types of projects, especially as it received $677 million from American Rescue Plan funding that can be used for infrastructure projects.

“That’s a shovel-ready project, and we wanted to take a look at it and see where it might rank in terms of other projects in West Virginia,” Carmichael said. “I can tell you it’s very well ranked. It’s a very impressive group of people and assets there.”

Additionally, he said, state officials may be able to assist Empire with recruiting private sector entities interested in locating in and around the port.

“There are obviously a lot of companies who will be interested in having ready access to what will be a world-class facility,” Carmichael said.

Empire officials also were meeting with Mike Graney, executive director of the West Virginia Economic Development Agency, for a more detailed briefing and tour of the port facilities.