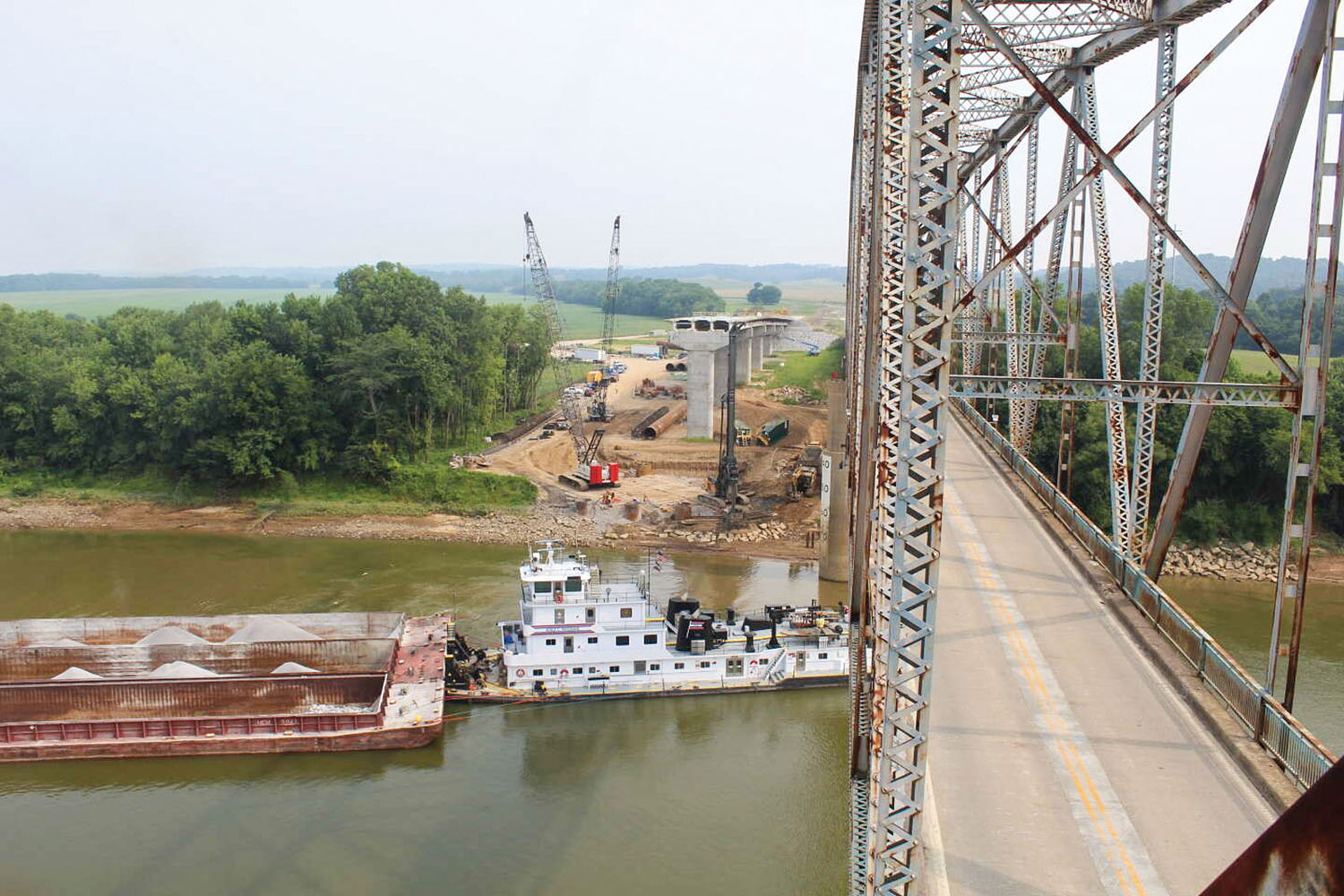 Construction began last month on the footers for the main piers of the new bridge over the Cumberland River in Smithland, Ky.

The bridge, at Cumberland River Mile 2.7, continues to be ahead of schedule with completion of the $63.6 million project expected in spring 2023. It is being built just downstream of the existing bridge and will carry U.S. 60 across the river.

“These main piers are closest to the edge of the river,” Poat said.   “While this work started about a month later than expected, the crew placing the pilings made up that lost time.”

The pilings are enormous pipes driven into the ground to help create a deep foundation to support the bridge. KYTC Project Manager Austin Hart says it is hard to imagine their size until you see them up close.

Also referred to as drilled shafts, the pipes are 80 feet long and 8 feet in diameter.

“They are essentially screwed into the ground,” Hart said.  “Once they are in the ground, the soil inside is excavated out, a pre-assembled cage of reinforcing steel is lowered inside the piling, then it is poured full of concrete.  It provides the base for the main piers.”

The Seamen’s Church Institute helped in testing designs for the bridge, including pier placement and alignment. Pilots simulated navigation with various pier placements and alignments during the day and at night and with varying river conditions.

The feedback was valuable and helped transportation officials determine the need for a design where at normal water levels the piers supporting the bridge are out of the water, said Keith Todd, spokesman for the KYTC district 1 office.

Steel for the main truss is expected to arrive later this summer. The 700-foot main span will be assembled off-site, beginning in the fall. It will then be floated to the construction site by barge and lifted into place in September 2022.

The construction schedule calls for moving traffic to the new bridge in spring 2023.

The new bridge will have a 40-foot-wide, two-lane deck with 12-foot driving lanes and 6-foot shoulders, allowing vehicles to share the bridge with most farm equipment without requiring oncoming traffic to stop. It replaces the Lucy Jefferson Lewis Memorial Bridge, often called the Smithland Bridge, built in 1931. The old bridge will be demolished as part of the project.

Caption for top photo: A towboat pushing a load of gravel passes beneath the current bridge over the river, built in 1931. The old bridge will be demolished as part of the $63.6 million project. (Photo courtesy of Kentucky Transportation Cabinet)