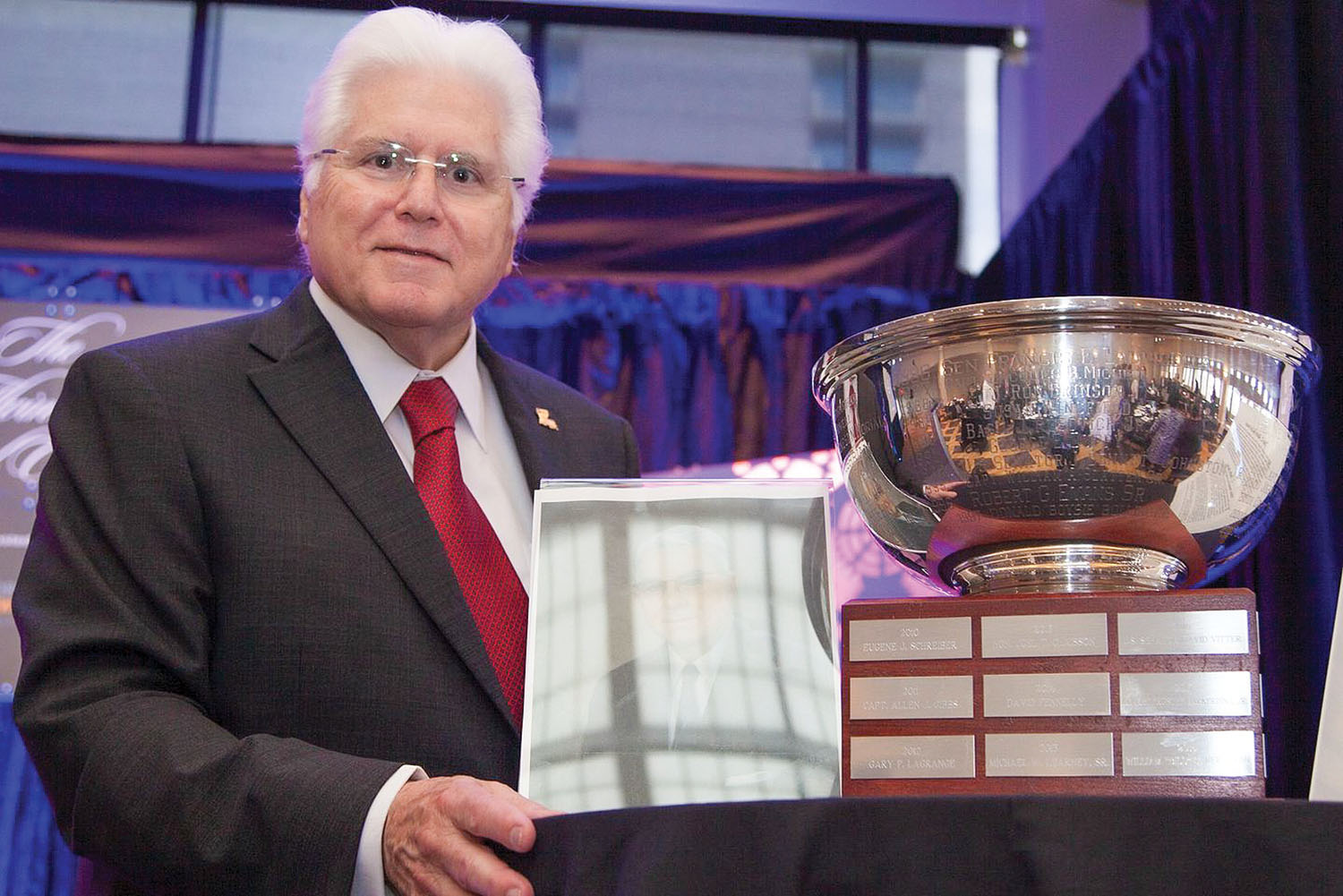 Members of the World Trade Center of New Orleans and the Louisiana maritime community gathered June 30 to honor Paul Aucoin, executive director of the Port of South Louisiana and the 2021 recipient of the C. Alvin Bertel Award.

Established in 1967, the Bertel Award is given annually to an individual who has made a significant impact on Louisiana ports and the maritime community—a qualification Aucoin meets and exceeds.

Aucoin has been involved with the Port of South Louisiana for nine years. He spent a year as chief counsel for the agency and has been the port’s executive director for the past eight years.

Over that time, the impacts of the Port of South Louisiana on the nation’s economy—and the port’s raw stats—have been quite impressive.

The port, Murray said, is the No. 1 port in the nation for tonnage, foreign trade and grain handling, and the No. 2 energy transfer port.

According to statistics gathered by GNO Inc., the Port of South Louisiana handled close to 307 million short tons of cargo in 2017. The port is home to about 60 percent of all exports from the state, which amounts to 15 percent of the nation’s total exports.

The Port of South Louisiana stretches 54 miles along both banks of the Lower Mississippi River between New Orleans and Baton Rouge and includes both public and private facilities.

Throughout his time as the Port of South Louisiana’s chief executive, Aucoin has been an outspoken voice for consistent and adequate dredge funding for the Mississippi River Ship Channel, often highlighting the importance of keeping the river open “all day, every day.”

“He has been a longtime advocate for the dredging of the mouth of the river,” Murray said. “He has written 13 different opinion-editorials in support of legislation and the passage of WRDA bills in Washington D.C. He has promoted the message that this is a nationwide problem, not just a regional problem or a Port of New Orleans problem or a Louisiana problem.”

That support, along with the coordinated effort by maritime industry leaders, the Corps and elected officials from throughout the Mississippi River Valley, resulted in the approval, funding and commencement of efforts to deepen the Mississippi River Ship Channel to 50 feet. That project will have far-reaching and generational impacts, Bertel Award attendees and Aucoin supporters said.

“I think my dad is deserving of the Bertel Award because he’s really used his position to make an impact,” said Shelley Aucoin Winters, one of Aucoin’s two daughters, who was featured in a congratulatory video screened at the award ceremony. “He played a vital role in obtaining significant funding for dredging of the Mississippi River, which will benefit the maritime industry in the state of Louisiana for years to come.”

Addressing the crowd gathered for the award banquet, Aucoin first recognized his two daughters, sons-in-law and grandchildren and honored his late wife, Rita.

Aucoin then recognized the commissioners of the Port of South Louisiana and the port’s employees and staff.

“The Bertel Award recipient should be an individual who has made significant contributions to Louisiana ports,” Aucoin said. “I am very proud to be considered such a person, and I look forward to contributing to Louisiana ports for many, many more years.”

In closing, Aucoin praised the many men and women who make up the Louisiana maritime community—some 70,000 strong, in fact.

The C. Alvin Bertel Award is just the latest recognition Aucoin has received from the World Trade Center of New Orleans for his leadership at the Port of South Louisiana. In 2017, the organization presented Aucoin with both the Eugene J. Schrieber Award, which honors an individual who promotes international trade policy benefiting the state, and the Order of the Plimsoll Mark, which recognizes a person’s work to promote peace, trade and understanding.