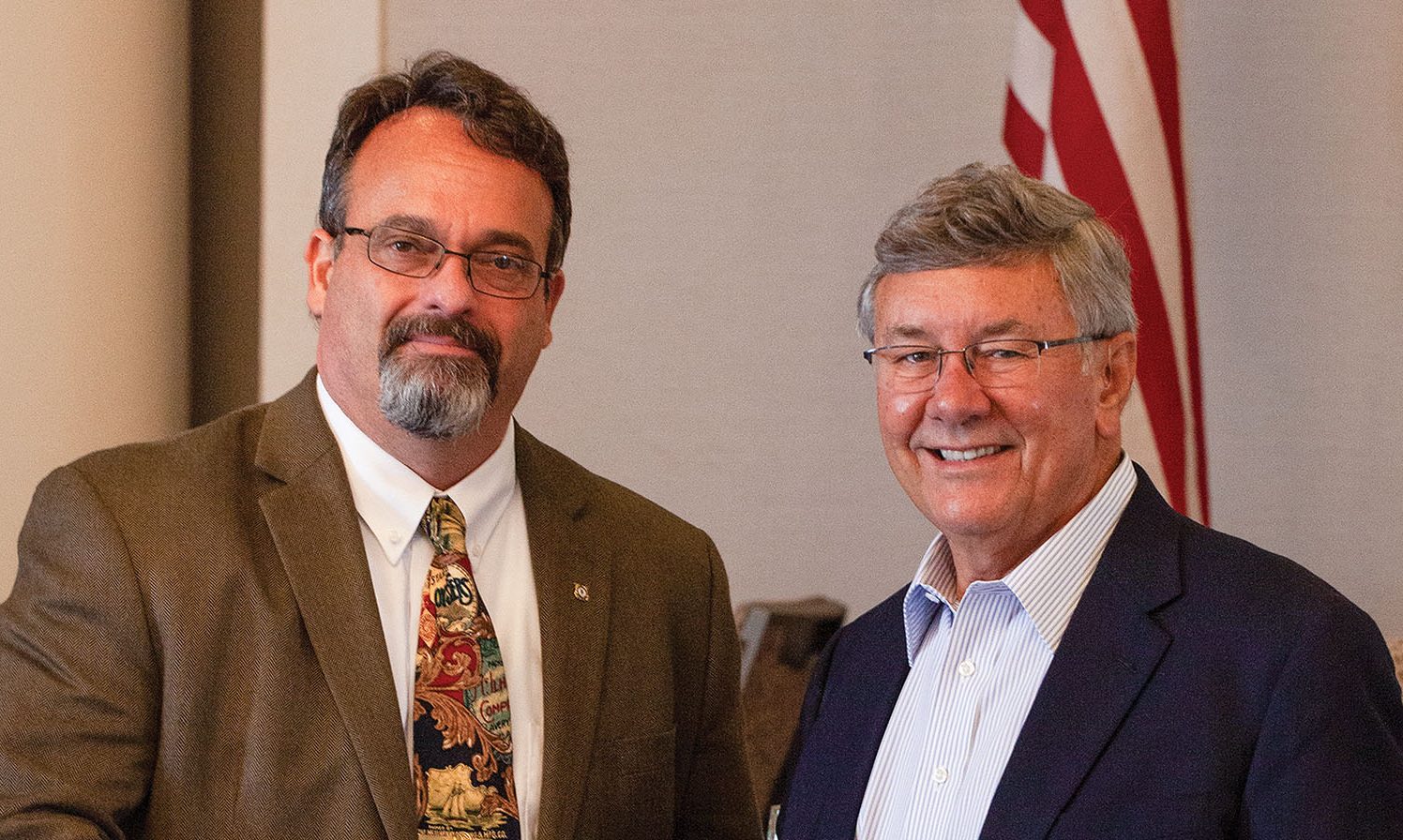 A major highlight of the meeting proved to be the “change of watch” between Jim Stark, who led GICA for the past 11 years, and his successor, Paul Dittman. Both Stark and Dittman are retired Coast Guard captains.

Rear Adm. Richard Timme, commander of the 8th Coast Guard District, delivered the opening address for the seminar and closed his session with praise for Stark’s leadership and his commitment to collaboration and team-building over the years.

“That has made this an effective body and a place where people can come together and identify solutions, and I know that will continue,” Timme said.

Following an energetic round of applause, Stark addressed the crowd, thanking all of GICA’s members and stakeholders for demonstrating what an “association” truly is.

“It’s not just one person,” Stark said. “It’s the association, it’s the members, it’s people within the industry who aren’t members, because we represent them as well. It’s also that link to other agencies that are also stakeholders: the Corps of Engineers, the Coast Guard, state partners.”

Those partnerships extend to state departments of transportation, ports and terminals, and bridge operators.

Stark highlighted the significance of the waterway, one of the busiest in the nation, which connects all of the major ports along the Gulf Coast.

He then singled out members of GICA’s board of directors for their unwavering support to him, and he praised Dittman for his readiness to lead the association.

In response, Mary McCarthy, chair of GICA’s board of directors, presented Stark with a plaque and offered her thanks on behalf of the board.

“Thank you for your exemplary leadership of GICA,” McCarthy said, quoting the plaque. “You’re the voice for the Intracoastal Waterway and its users, an extraordinary facilitator of commerce on the GIWW and the gold standard for ensuring safe, reliable and efficient transportation throughout the Gulf Intracoastal Waterway.”

Day two of the seminar opened with the “change of watch” between Stark and Dittman, with Stark reading his official resignation letter. Later in the program, Tim Osborn, with the National Oceanic and Atmospheric Administration’s Office of Coast Survey, presented Stark with a letter of thanks from NOAA.

Projects On The GIWW

Commanders from the three U.S. Army Corps of Engineers districts along the waterway spoke on major projects planned for the GIWW.

Col. Timothy Vail, commander of the Galveston Engineer District, focused on the Brazos River Floodgates and Colorado Locks, offering a detailed timeline for the two projects.

Vail said his district is about to award the task order for removing the west-side gate at the Brazos River. The district plans to eventually remove the west-side gate and build a new 125-foot-wide sector gate on the east side. According to the current design and construction schedule, Vail said, the Corps will complete the design phase in March 2023, with the construction contract to be awarded in August 2023. The Corps plans to complete construction on the new gate and realigned approach channel by December 2025.

Vail said both gates at where the Colorado River intersects the GIWW will be replaced between 2025 and 2028.

Col. Stephen Murphy, commander of the New Orleans Engineer District, overviewed his district’s 2020 hurricane season, which saw impacts from three major hurricanes in Laura, Delta and Zeta. Murphy said key lessons learned before, during and after those storms were the importance of communication, collaboration and compromise.

For an example, Murphy pointed to the swing bridges in the Calcasieu area just after Hurricane Laura devastated much of southwest Louisiana. Residents wanted access to their homes, while towing vessel operators desperately needed to move cargoes east and west. The compromise reached was for bridges to be open for vehicular traffic during daytime hours and open for navigation in the overnight hours.

Murphy also spent considerable time discussing the future replacement of the Inner Harbor Navigation Canal (IHNC) Lock, which remains the only access point on the east bank of the Mississippi River for the GIWW.

To illuminate just how much of a chokepoint the IHNC is for the GIWW, Murphy pointed out that there is seven times more locking capacity for cargo through structures on the west bank of the river—including Algiers, Harvey, Port Allen and Old River locks—compared to the lock at IHNC.

“It is the bottleneck, as everyone knows,” Murphy said. “It’s a 100-year-old lock, and the Corps is pushing for a replacement, but while we’re waiting on a replacement, we still have to maintain it.”

With the proposed plan, the IHNC Lock would go from 640 feet long to 900 feet and from 75 feet wide to 110 feet. Construction is expected to take a decade, Murphy said. No timeline has been set, and the study is yet to be authorized.

“We need a new IHNC Lock, and I’m here to tell you there’s strong advocacy, more than there’s ever been,” Murphy said.

Col. Jeremy Chapman, commander of the Mobile Engineer District, then introduced himself to GICA members. Chapman took command of the Mobile District earlier this summer.

His district is in the midst of deepening its ship channel to 50 feet. Chapman also highlighted his district’s efforts to promote safety in the age of COVID. The district also recently finished deepening the Panama City, Fla., harbor to 36 feet. The district will also be renourishing beaches in that area in the near future.

Coast Guard officials from across the Gulf Intracoastal Waterway also took turns introducing themselves and updating operators on issues regarding aids to navigation, bridge operations and COVID protocols. In spite of a busy 2020 hurricane season and the global pandemic, sectors from along the GIWW continue to make good progress on Subchapter M inspections and certifications.

According to the phase-in for Subchapter M, 75 percent of the fleet should have received certificates of inspection (COIs) by now, sector and marine safety unit commanders said. Across the Coast Guard, the overall number stands at just under 65 percent. Coast Guard units from across the GIWW, though, are better than average, with Sector Mobile reporting 77 percent compliance, New Orleans reporting about 70 percent compliance, and Marine Safety Unit Houma reporting that 95 percent of companies within its area of responsibility have already met the 75 percent threshold.