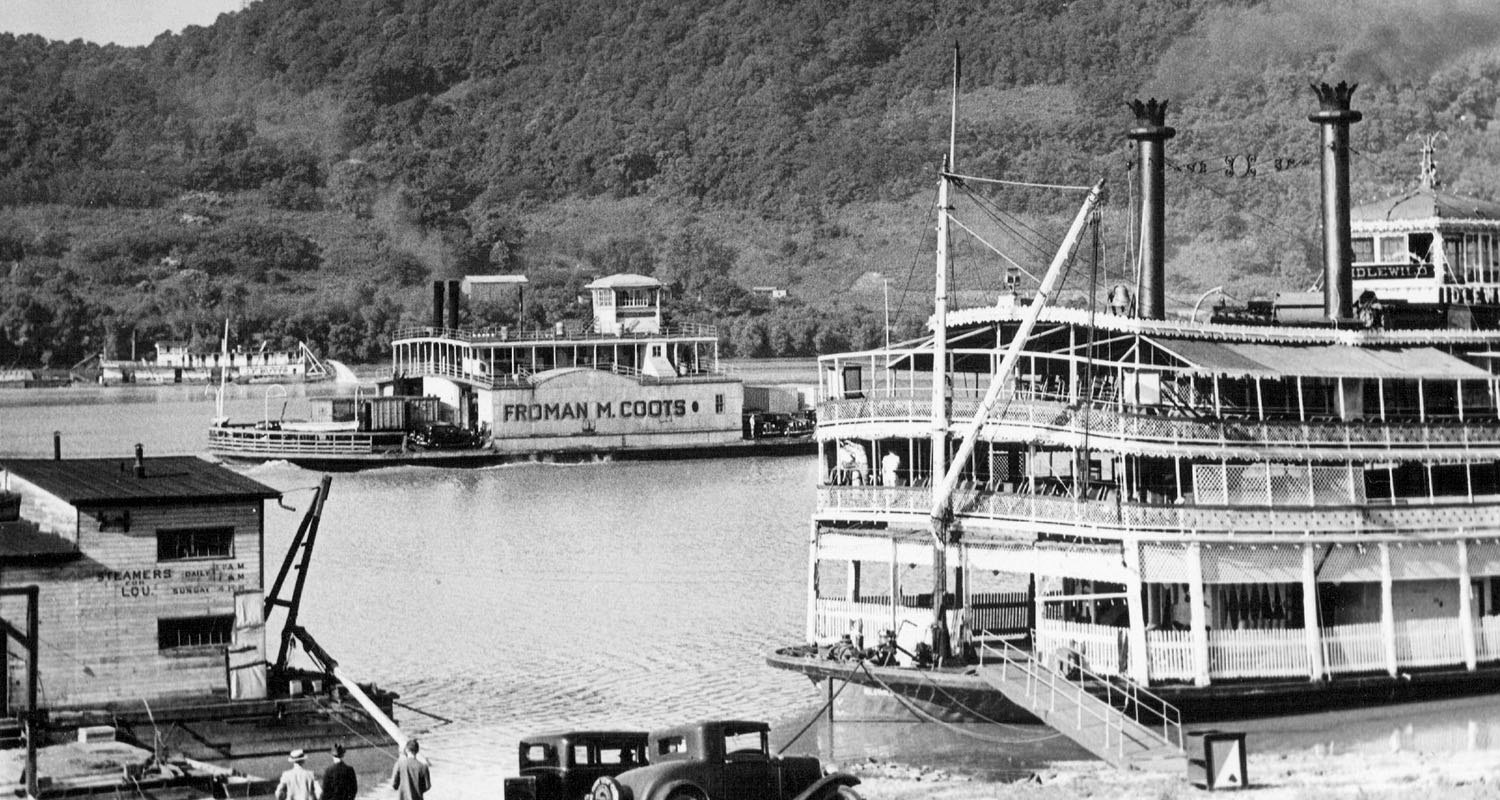 Before the grand opening of the George Rogers Clark Memorial Bridge, spanning the Ohio River between Louisville, Ky., and Jeffersonville, Ind., numerous ferries were in operation over many decades.

The last ferry boat was the Froman M. Coots, named for the son of prominent Jeffersonville funeral director Edwin M. Coots. Coots was an officer of the Falls Cities Transportation Company, which operated the boat from 1920 until the dedication of the bridge on October 31, 1929. The Coots family continues to operate a funeral home in downtown Jeffersonville.

Built in 1912 by the Howard Shipyard at Jeffersonville, Ind., the boat was ordered by the Wiggins Ferry Company at St. Louis for a cost of $83,000. Constructed on a steel hull measuring 169 feet long by 50 feet wide with a depth of 7 feet, the vessel was originally a steam sidewheeler named W.S. McChesney Jr. The boat was converted to diesel-electric drive in the spring of 1925 by the Falls Cities firm and ran between Louisville and Jeffersonville in conjunction with the Henry Watterson.

The Coots continued in operation for two months after the bridge opened to complete charter provisions. On December 31, 1929, the revered ferry made its final crossing, with 600 people and 30 automobiles aboard, at 6 p.m. For the last two hours of operation, all crossings were free.

Alan Bates (1923–2012) once recalled riding the boat as a 5-year-old and being fearful as the boat passed under the bridge, owing to the illusion of the tall jackstaff about to strike the span. When the new municipal bridge made it obsolete in the ferry trade, the boat was sold to the Ohio River Transit Company, which ran it in the freight business between Louisville and Cincinnati.

After retirement, the Coots was dismantled at St. Louis for use as a wharfboat. The roof bell is today in the collection of the Howard Steamboat Museum.

In this week’s main image, taken on June 15, 1934, the Coots is shown in its latter days as a freight packet, downbound at Madison, Ind. Prominently in view at the landing near the city wharfboat is the excursion steamer Idlewild, built at Pittsburgh by the James Rees & Sons firm in 1914. Renamed Avalon in 1948, the vessel continues in operation today as the Belle of Louisville and was the focus of a gala centennial celebration in 2014.

In the distance, upbound along the Kentucky shore, is the towboat J.F. Butts. Built at Madison, Ind., in 1919 from the Reba Reeves by the E.J. Hickey Transportation Company, the vessel was completed at Carrollton, Ky. Built in 1897 utilizing much equipment from the R.B. Kendall, the Reeves sank in the ice near North Bend, Ohio, on February 15, 1918, but was raised. The sternwheeler was constructed on a wooden hull that was 106 feet long by 22 feet wide.

Long commanded by Capt. Thomas Meek, the Butts was the first boat through the new lock of the Louisville & Portland Canal in April, 1921. Capt. Leon Ash served as pilot during the 1920s with Cliff Tague presiding as engineer. When Capt. Meek passed away in 1932, he was praised by rivermen as being one of the best pilots on the river.