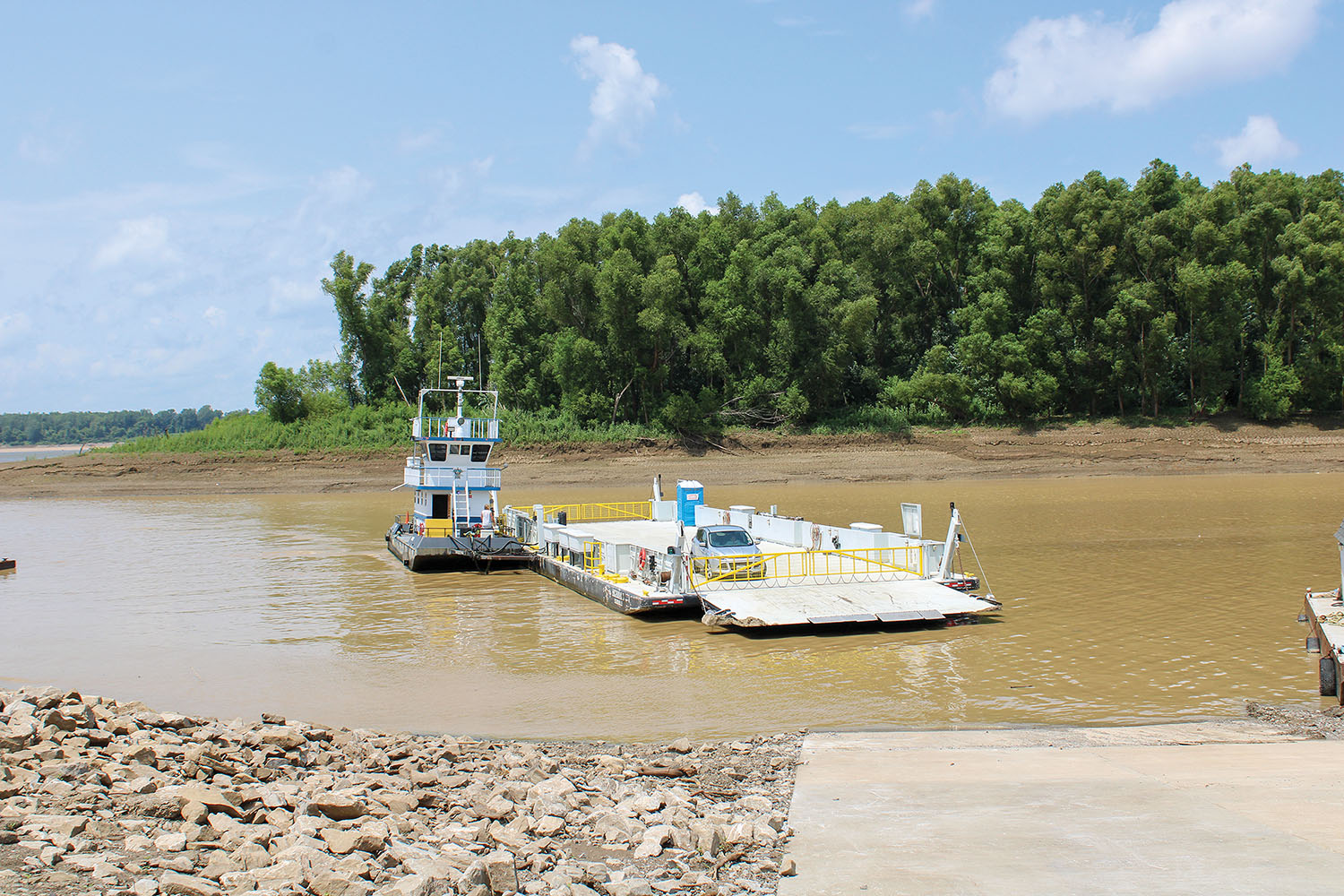 A Ferryboat Trip Through Time

A 15-minute trip across the Mississippi River on the Dorena-Hickman Ferry is also in many ways a trip back in time.

The ferry at Mississippi River Mile 922.0 has hauled people and equipment the 1.25 miles across the river—between Hickman, Ky., and near Dorena, Mo.—on and off for around 180 years, as best as research can determine.

It connects the most southwestern city in Kentucky with the part of Missouri that juts out the farthest east. Along the way, the ferry has to maneuver around a sandbar near the Kentucky shore, where tree growth now blocks the sight lines between the landings.

The Mississippi County (Mo.) Port Authority, which owns and operates the ferry, local residents and a researcher at the Hickman branch of the Fulton County Library in Kentucky all were not positive about when the ferry made its first trip, but an online search yielded a 1991 article from The Atlantic Monthly that quoted Hugh Lattus, the owner at the time.

Lattus said in the article it was founded in 1840. A July 1992 article from the (Louisville) Courier Journal newspaper also indicated the ferry was founded in 1840, based on information provided from those interviewed. The ferry evidently grew right along with the community. The town of Hickman was founded in 1819 as Mills Point, with the name changing to Hickman in 1837. That makes it the largest and second oldest city along the Mississippi River in Kentucky. Mark Twain called Hickman “a pretty town perched upon a handsome hill.”

By the early part of the 20th century, the ferry business in Hickman was booming.

“Business in those days was very good,” the Atlantic Monthly article, titled “Across the Mississippi: In Search Of Ferries Past,” says of the ferry trade back then. “Roads on the Missouri side were primitive, while roads on the Kentucky side were sound. To get their crops to market, Missouri farmers had first to transport them across the river. The only way to do that was by ferry.”

Don Lattus, Hugh’s son, operated the ferry under his father’s ownership in later years. Hugh Lattus leased it around 1954 and owned it starting about 1962, according to interviews with family members, who were all within a few years of those general dates.  The ferryboat made its last public crossing under Lattus’ ownership in September 1991, according to the Courier Journal article.

“It just got too expensive as far as the Coast Guard [inspections and required maintenance] and insurance for us to operate, so we sold it,” Don Lattus said.

Even then, family members knew it had a rich history, though only sparsely documented.

“I can remember him saying they used to have mules and a cable on each side, pulling it back and forth,” Don recalled of a conversation with his dad. “Of course, the river wasn’t as wide as it is now, either,” he said, noting that structures erected in the intervening years had greatly changed the river’s appearance and flow.

The ferry found itself as the center of news events a few times over the years.

A 1941 article in the (Paducah, Ky.) Sun-Democrat newspaper recounts a tragic happening April 9 of that year, when two men drowned after their U.S. Engineers Department truck “crashed through the end gate of the Hickman ferry and plunged into the river when the brakes on their truck refused to hold.”

Some 1953 newspaper articles note that the ferry was mentioned as part of the defense for a Hickman man eventually convicted of a bank robbery in Troy, Tenn., and sentenced to serve 25 years in prison. His attorneys unsuccessfully argued that the man, William Howard Dunn, couldn’t have committed the robbery because he had not crossed the ferry the day of the bank robbery, according to the pilot-operator, J. Frank Shields, who was called to testify.

The ferry came into the Lattus family’s hands sometime in the 1920s or 1930s. Hugh Lattus’ uncle, C.A. Lattus, was the owner then. C.A.’s daughter, Lucy L. Strong of Louisville, Ky., knows for sure that they had the ferry, then simply known as the Hickman Ferry, by 1934. She knows that exactly because that’s the year her parents were married, and her father proposed to her mother, Geneva, on the ferry.

It’s a wonder the two got married, as Strong tells it, as her mother was afraid of the river crossing.

“So this particular night when there weren’t any cars, he had the pilot come out and kill the motor, and she thought the motor had torn up or burnt up or whatever, and that they would float down the river, and she was worried to death about getting back, and he proposed to her,” Strong said.

C.A. Lattus owned various ferryboats over the years, but Strong remembers the names of two of them, the Lucy Lattus and the Carole Ann, named after her and her sister.

The ferry must have grown on her mother, because Strong also remembers the tears when her father decided to sell it to an entrepreneur named Lloyd “Scrap Iron” Counce sometime in the 1950s. It was only out of the family a few years before Hugh Lattus bought it back, mainly because he farmed on both sides of the river and needed the ferry to get crops and equipment back and forth. He continued the family history, naming the ferry boat at the time the Barbara Don after his own two children.

The number of passengers dropped off steeply in the 1970s after the opening of the Interstate 155 bridge between Caruthersville, Mo., and Dyersburg, Tenn., according to the Atlantic Monthly article.

The area’s population also dwindled. In 2019, Hickman had a population of 2,079, according to the U.S. Census Bureau. Dorena isn’t incorporated, so town-specific numbers weren’t available, but the entirety of Mississippi County has just over 13,500 residents.

Tammi Hutcheson, Mississippi County Port Authority executive director, said the authority assumed control over the ferry in 1996, resuming operations five years after the Lattus family closed it. The ferry service is subsidized with state funding from both Kentucky and Missouri in addition to passenger fees. Basic fare is $14 for vehicles up to 8 feet wide and 30 feet long, with a half-price return crossing.

“Without the two states, it would be an expensive ride,” Hutcheson said.

It would be so expensive, in fact, that the consensus is that passengers would be better off spending the gas money to cross a bridge either upstream or downstream. Unsubsidized fares would have to be expensive because the ferry burns about 80 gallons of diesel daily and it has averaged 38 vehicles and 86 passengers per day for the last fiscal year, Capt. Jeremy Newsom said.

Hutcheson said the ferry still sees a sharp increase in the number of riders every time the Caruthersville-Dyersburg bridge 50 miles to the south or the U.S. 62 bridge connecting Cairo, Ill. to Charleston, Mo., 50 miles to the north, is closed for repairs or inspections following a barge hit.

The states were interested in subsidizing the ferry, in part, because the region is part of the New Madrid Fault, and a major earthquake could destroy the neighboring bridges.

“It’s one of those things you think this is pretty neat, but if we have an earthquake in this area, that little ferry is going to be pretty handy,” Hutcheon said.

These days the ferry has also become a tourist attraction, particularly popular with those traveling the country on motorcycles, going east and west over the Mississippi at every crossing as part of a relaxing ride through the country’s heartland.

People have asked the deckhands if they can purchase T-shirts. There aren’t any available, although now and then they have “I Rode The Dorena-Hickman Ferry” stickers for sale.

“Ride the Dorena-Hickman Ferry and take advantage of this unique opportunity to experience the wonder and beauty of the Mighty Mississippi and America’s Heartland, an area rich in heritage and natural beauty,” the homepage reads.

Newsom recalls a few unusual recreational boaters he assisted over the years. He found a South Korean kayaker a place to spend the night in a local church when he arrived unprepared for the lack of a town for miles on the Missouri side of the river. Newsom also helped a group of Australians who tried to tackle the Mississippi River on a ramshackle wooden raft supported by 55-gallon drums on which they had erected a shack. It had some lawn chairs on top for seating and a motor on the back.

“I don’t know where people get these ideas,” Newsom said, shaking his head. “They’re crazy.”

Most ferry riders are much more conventional.

Where once passengers turned a sign board at their ferry landing to let the pilot know passengers were waiting if the boat was across the river, now the ferry service has a call button at each landing.

Newsom said the call button on the Kentucky side doesn’t work well, though, and it’s more common for waiting passengers to call the phone number posted on the website or just to check the ferry’s Facebook page, which is updated regularly to indicate those occasions when it must close because of high water covering the landing, because of inclement weather, such as high wind or fog, or because of repairs or harbor dredging.

He does advise calling or checking online before coming to take a ride. Most recently, the ferry closed for dredging August 18 but was only expected to be down three or four days.

The ferry operates as a towboat pushing vehicles loaded onto an attached deck barge. The barge has gates closed across each end during crossings.

The current boat is the 750 hp., twin-screw Dorena II, built by Progressive Industrial in 2003. The barge is the Hickman II and was built in 2012.

The ferry typically fits 16 to 18 regular sized vehicles or up to two tractor-trailer rigs and up to six regular-sized vehicles around them. It can also accommodate up to 148 people, Hutcheson said. It makes 10 to 12 trips across the river on demand daily beginning at 7 a.m. from the Kentucky side with the last trip at 6:15 p.m. mid-March to mid-October and an hour earlier in the colder months.

Newsom has had several people in his family work on the river and said he enjoys it. “You meet good people,” he said.

He also enjoys seeing the wildlife, including bald eagles.

“It’s a good view from up here,” Newsom said.

That’s one thing that hasn’t changed in 180 years and counting.