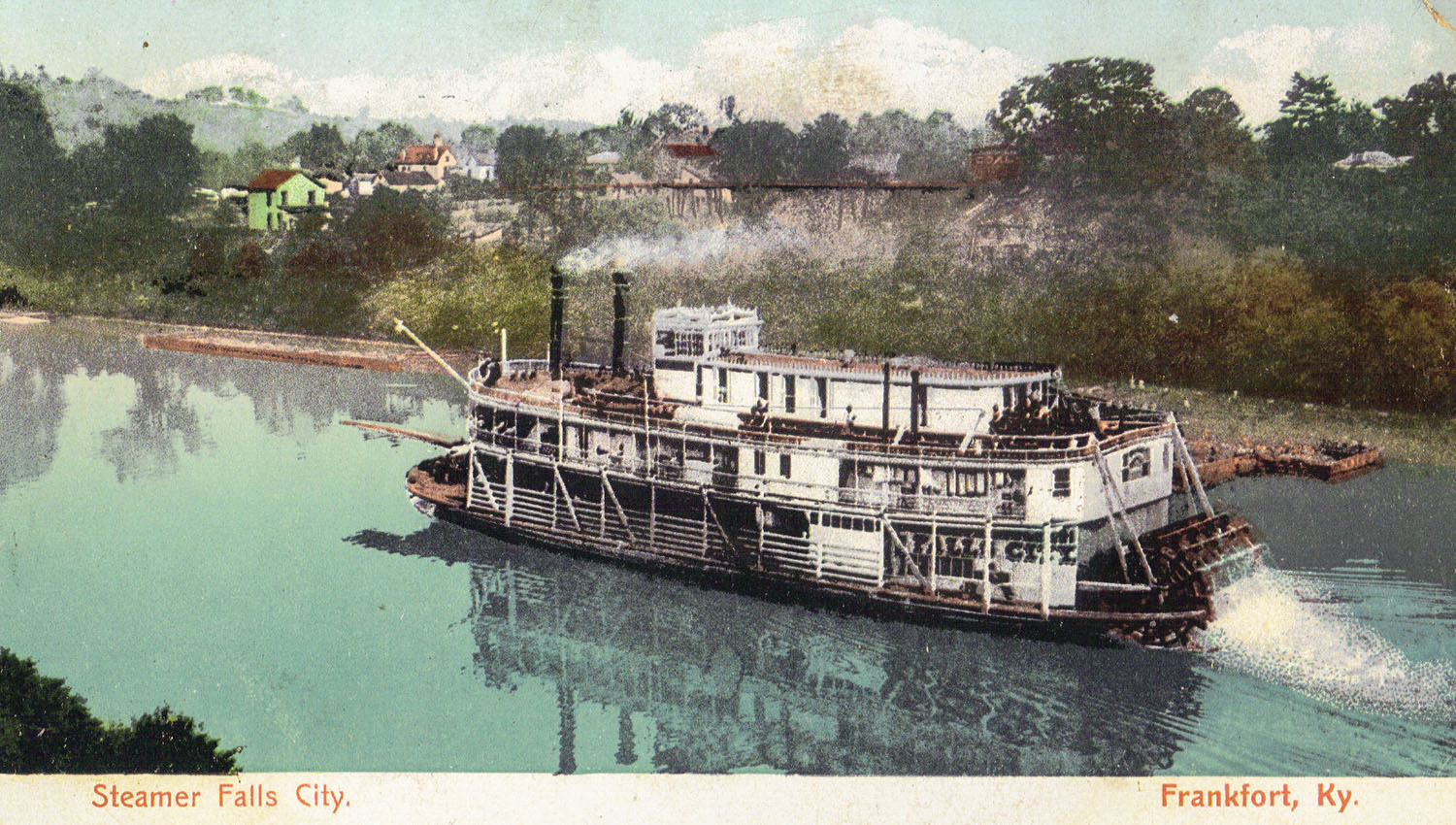 Recent acquisitions to the writer’s collection of regional river memorabilia are a post card and freight bill from the steamer Falls City. Built in 1898 at Cincinnati for the Kentucky River Packet & Towboat Company, the boat ran between Louisville, Frankfort, High Bridge and Valley View. After departing Louisville, a typical trip to Frankfort, with stops at various landings, took a day and a half, with an additional day to reach Valley View.The wooden hull measured 132 feet in length by 32.6 feet in width. The guards actually made the main deck 36 feet wide, which, with the addition of the wooden fenders hanging from the bulkheads, allowed for precious little maneuvering room in the small Kentucky River lock chambers. Two coal-burning boilers supplied the steam for the engines, which had 12-inch cylinders with a 4.5-foot stroke.

While operating on the Ohio and Kentucky Rivers, the vessel suffered an inordinate number of mishaps. On May 25, 1898, while still relatively new, the Falls City collided with the towboat Mary Lacy and a tow of barges doing damages estimated at $250. On December 18 of the same year, James A. Hughes, the chief engineer, allowed the water in the boilers to fall below the prescribed limit, and the inspectors of the U.S. Steamboat Inspection Service revoked his license. While laid up at Louisville, the boat caught fire on October 28, 1900, sustaining $7,000 in damages but no loss of life.

Problems and tragedy continued to plague the steamboat, especially around the Kentucky River locks. While passing through Lock 6 on January 7, 1902, deckhand Henry Bartlett fell from the lock wall and drowned. While entering Lock 1 on February 19, 1907, the boat was caught by wind and cross currents, throwing it against the side of the lock wall, damaging the guards and injuring deckhand Charley Waters. On August 7, 1907, the sternwheeler struck a submerged log while approaching Lock 9, causing estimated damages of $125 to the hull on the port side. In the early morning hours of November 6, 1907, deckhand Alf Barry stepped off the lock wall at Dam 9 and drowned. Earlier the same year, on February 19, deckhand Jack Allen drowned after falling overboard below Carrollton, Ky. The run of bad luck throughout 1907 also included an engineroom incident when, on June 6, 1907, the piston rod of the port engine broke, knocking out and cracking the cylinder head, doing $250 in damages but causing no injuries.

Vicksburg, Miss., riverman Capt. Tom Morrisey, mentioned in an Old Boat Column presenting the history of the beautiful sidewheeler Belle of the Bends, bought the Falls City in 1908 to replace his small packet Rosalie M, which was lost after sinking 20 miles above Vicksburg in February of that year. A large “M” was placed between the smokestacks, a Morrisey insignia.

In recent months, the writer has enjoyed correspondence with Kelly Morrissey Stevens, currently a Vicksburg city official, who is now collecting family steamboat history and riverboat relics. Apparently the boat was better suited to the Lower Mississippi River, for no records have been found of navigational misfortune. Soon after the Falls City was purchased by Morrisey, the texas was lengthened and the pilothouse placed amidships. The boat continued to run as a packet out of Vicksburg until 1915, when it was laid up and later dismantled.