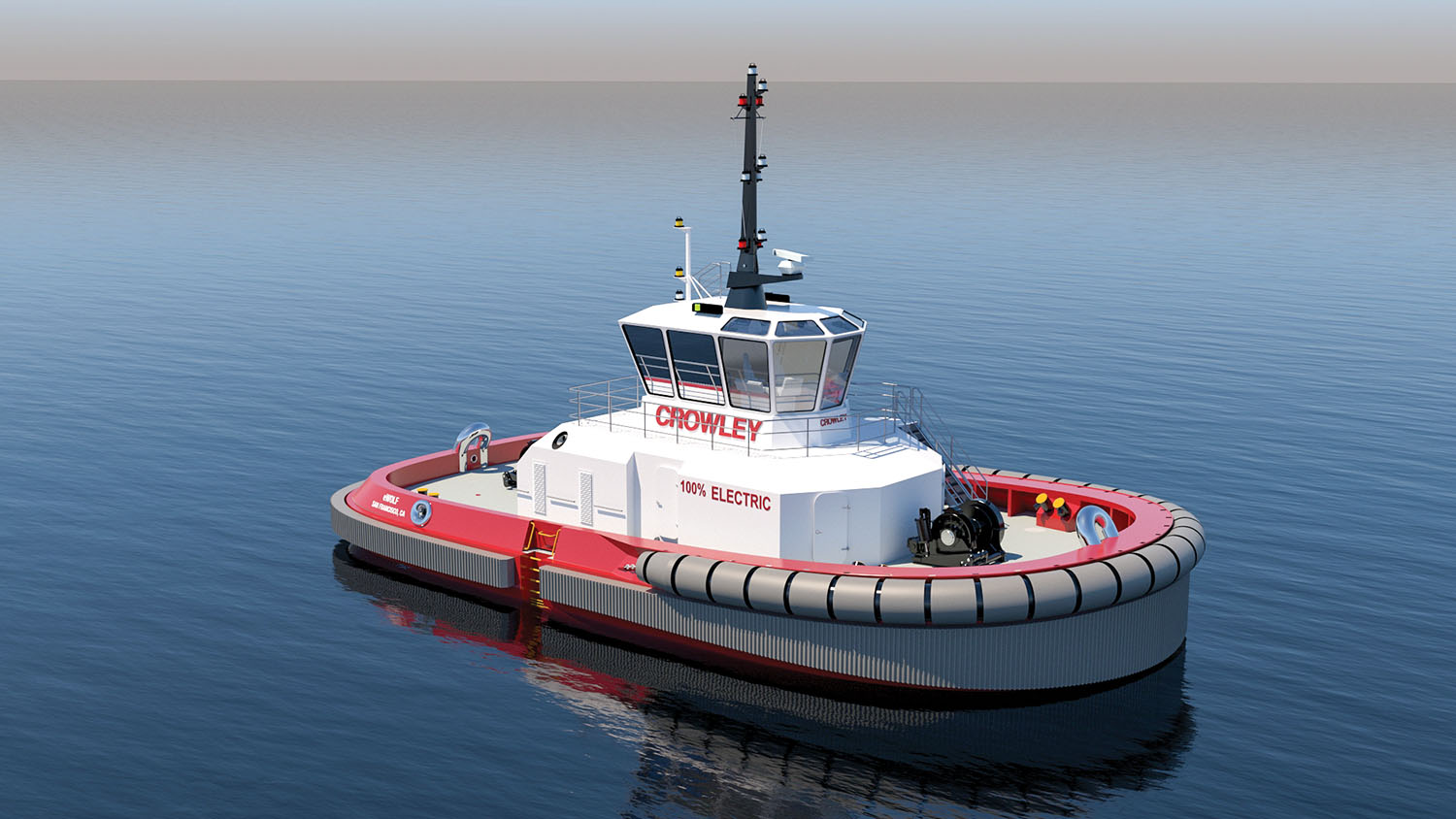 ABB is providing an integrated electric propulsion system and advanced vessel control technology for Crowley Maritime Corporation’s pioneering eWolf tug, built for sustainable and safe operations at the Port of San Diego, Calif. It will be the first all-electric, battery-powered tugboat ever built and operated in the United States, and only the third of its kind to enter operations worldwide. It represents a breakthrough in sustainable vessel operations that is drawing interest from all over the maritime world, especially since harbor tug operations are some of the most demanding.

Under a contract with Alabama-based Master Boat Builders Inc., ABB is supplying the end-to-end electric propulsion system to sustain emissions-free operations in waters off the eighth most populous city in the United States. The solution will include a six-megawatt-hour energy storage system (ESS), allowing Crowley’s eWolf tug to achieve 70 short-tons of bollard pull emissions-free. The battery allows the tug to complete a full day of typical work before there is a need to charge.

Achieving lower operational costs on a through-life basis than an equivalent vessel running a conventional engine, the all-electric propulsion solution holds the potential to eliminate the equivalent of more than 100 cars worth of carbon dioxidepollution every year, according to ABB.

Members of the team that designed and built the eWolf are very aware that they are pioneering a new trail. “Every vessel we build has its own challenges and opportunities, and the eWolf is no different in that regard,” said Garrett Rice, president of Master Boat Builders.

“As the builders of the first all-electric tugboat in the United States, we have developed a comprehensive team and integrated plan for the unique design, engineering, procurement and construction of this vessel. Our skilled workforce has constructed hundreds of vessels over the past four decades, many of which are first-in-type for maritime operators across the country, and we look forward to completing this exciting project for Crowley by mid-2023.”

Greg Glover, director of engineering for Crowley, said, “ABB was instrumental to doing the calculations based on their experience with other electric vessels and working with our engineering team on the performance we needed based on our operating data. The ABB team interviewed our captains to really understand what was happening in an operator’s day. Understanding when peak power is required, what are the high-load maneuvers and what could be done to reduce loads or become more efficient was essential for this project.”

The interviews with captains were only part of the research effort needed to develop the batteries. “We developed the battery requirements utilizing years of operational data from Crowley and analyzing that data to develop a representative operational day. From there we closely worked with Crowley, as well as our marine battery vendor, Corvus, to develop the required battery. This is not an easy step, as you need to not only analyze the power needed per day, but the number of charges and discharges in a particular day to size the battery accordingly,” said David Lee, senior account manager for ABB Marine & Ports.

As Lee, explained, “ABB’s Onboard DC Grid employs a patented protection scheme that uses a combination of fuses, isolators and breakers and converter control to effectively protect the system at its core of our Onboard DC Grid.”

“It is important to understand that in a system such as the one installed on the eWolf, there is a large amount of stored energy. This energy wants to discharge as quickly as possible. It is because of Onboard DC Grid that we are able to control that power in a usable way to be utilized in projects including the eWolf. The development of the system was a lengthy process by ABB Marine & Ports team, and it will be at the heart of the transition to energy efficient and zero emission boats in the marine world.”

Having a battery instead of an engine for a main power supply simplified design work to some extent. “Batteries don’t conform to the space they are in, so we needed to design a safe storage area that meets the requirements,” said Coulston “Cole” Van Gundy, director of commercial operations for Crowley. “We did this and now have a climate-controlled battery room with clean bilges. The mechanical system design was very simplified, considering many of the support systems for a conventionally powered vessel were not present.  Instead, many of these systems are replaced with cables and control cabinets.”

Tugs normally work in and around harbors. If longer trips are required, though, such as from the Port of San Diego to the Port of Long Beach, the eWolf has generators onboard. The vessel is designed to run off only battery power during operations in the port. However, for a long trip the batteries can still be utilized for peak shaving if there is a need for a short boost of power or spinning reserve in case a generator is lost, Lee said.

Among the many health, environmental and safety benefits, one the crews will appreciate is the quieter sound and lower vibration. “The easiest way to describe the sound of an all-electric tug in comparison to a traditional tug is to think of the sound of an all-electric car compared to a muscle car,” Lee said. “Today’s tugs are pure muscle with large engines installed that lead to not only noise for the crew, but also the surrounding community. This is one of the side benefits of the eWolf, in that there is little to no engine noise compared to the traditional tug. Also, there is little vibration as there are not large engines firing around the clock, so the crew comfort will also increase on these all-electric boats.”

Glover adds that the team considered all the noise sources, not just the engine. “We considered what the new noise would be. The rumble of diesel engines covers up much of the auxiliary system when they are running. We’ll be insulating the spaces to reduce the sound of compressors and pumps that, until now, went pretty much unnoticed.”

Another benefit is easier maintenance. “If you take the diesel engines out of the equation, clean energy will reduce the lifecycle OPEX,” Glover said. “Every system has been selected for efficiency and reliability with the goal of reducing costly maintenance.

“We also see reducing risk to vessel owners not having to deal with fueling spills, oil changes and hazardous waste. Less maintenance also reduces risk for our crews having to maintain diesel boats. It’s early, no doubt, but if you consider the unrealized savings potential, that should make your business for your upfront CAPEX.”

“Maintenance will transition to a much more predictive style versus preventative that is required today with mechanical engines,” Lee said. “With the ABB RDS system and Corvus battery management system, issues can be identified before a failure occurs. This will also allow for a planned maintenance program where costs are much lower compared to failure that occur today without notice.”

The Future Is Here

So how much interest is there in all-electric marine solutions like this? “More than you might expect,” Glover said. “Crowley’s been chasing clean energy for years now. Rail, terminals and the on-road communities have been at it for a while now, but not quite to the level we needed for marine applications. Today, the technology is right for what we do—not all, but for the short run or day-type workboats, we have options. Based on several years of operational data, fuel burn, when we worked, how much time we had at the dock, how much grid power is available and at what cost. All those things were figured into turning propellers and for how long.”

The eWolf will use an ABB Remote Diagnostic Service system for continuous monitoring of the vessel’s systems. “This information gathered via the system will be very helpful for Crowley for not only operations, but also for the Crowley marine services for the design of new vessels with energy storage in mind,” Lee said.

“The future boat is here today,” he adds. “The eWolf is a start of the electric and digital transformation that is going to become the norm in many boats that operate on the waters in the United States. The boat is not only going to be an emission savings giant, but it will also be efficient in the way that it operates and utilizes the emission savings technology.

“The eWolf will have regeneration systems on the thrusters and winches to capture what would normally be wasted energy that can now be stored in the batteries to extend the operational time of the tug. The eWolf also employs ABB’s Marine Pilot Vision and Marine Pilot Control systems that will enable safer and more efficient operations. The captains can now concentrate on the task at hand versus worrying about all the other distractions around them, such as pleasure craft operating in the area.”