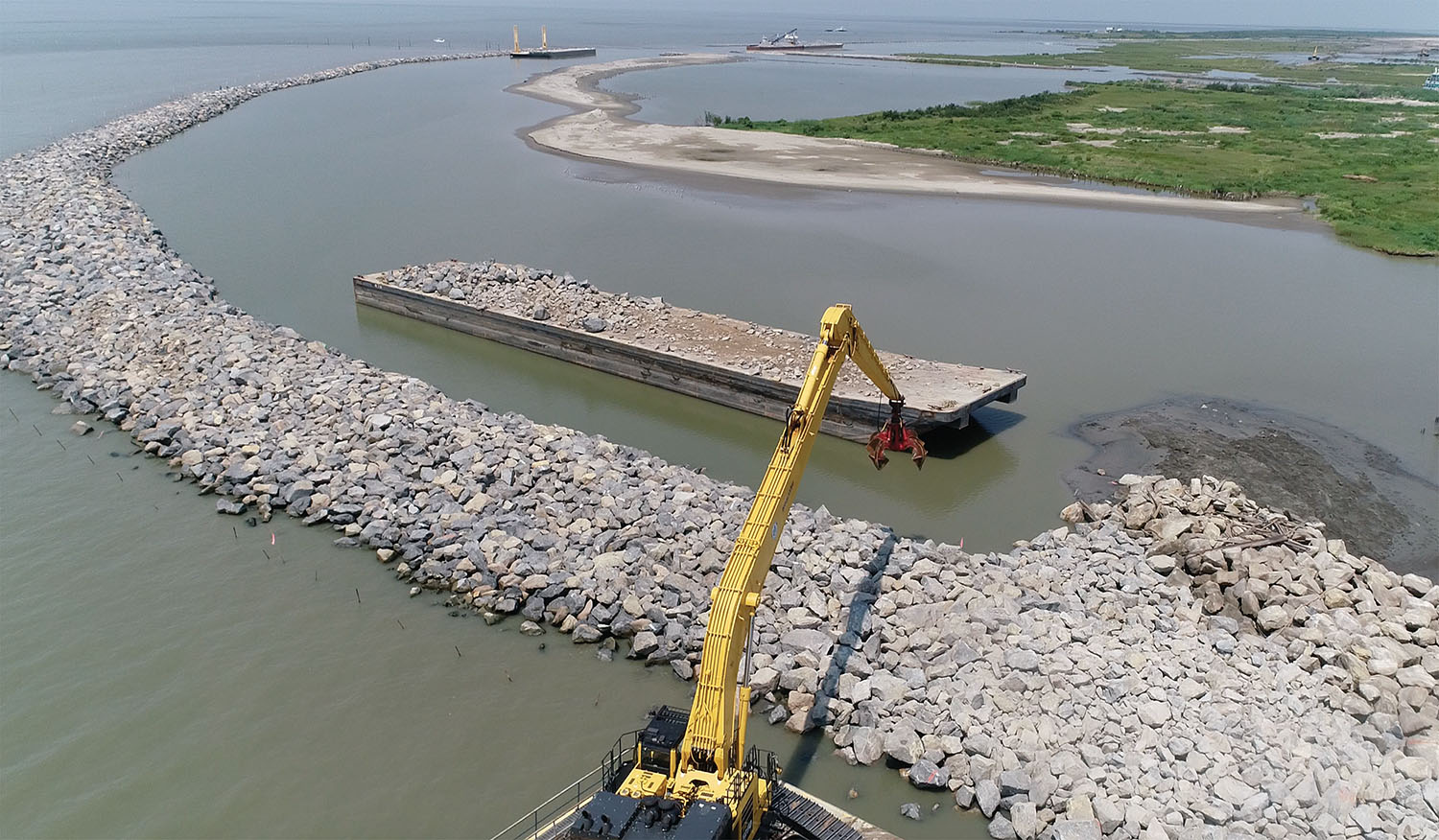 A $102 million project to restore 256 acres of beaches and dunes and 143 acres of marsh is taking shape on a barrier island just east of Grand Isle, La.

Weeks Marine was awarded the bid on the West Grand Terre Beach Nourishment and Stabilization project from the Louisiana Coastal Protection and Restoration Authority (CPRA) on July 1. West Grand Terre Island is located at the mouth of Barataria Bay and is bordered by the bay to the north, Barataria Pass and Grand Isle to the west, Quatre Bayou Pass to the east and the Gulf of Mexico to the south. The island helps protect communities between New Orleans’ west bank and Bayou Lafourche from hurricanes and storm surge, depending on the storm’s direction, according to the CPRA.

As part of the project, West Grand Terre Island is receiving nearly 2.5 million cubic yards of dredged sediment, which project leaders note is nearly enough to fill the Empire State Building twice. It will create marsh containment dikes and rock breakwaters and raise the beach’s elevation, which is currently from 1 to 4 feet above sea level, by 4 feet, up to as much as 8 feet above sea level. That will allow for land building and increased protection from wave impacts and storm surge.

Subcontractor Madere & Sons Towing/Deep South Construction & Salvage has been in charge of placing stones to form an armor rock wall following the deployment of the sand.

The biggest rocks weigh from 2.5 tons to 6 tons each. Below them is a core of smaller rocks about 2 feet long, with geotextile fabric lining underneath.

In all, the project called for roughly 50,000 tons of armor stone.

The project was funded primarily through part of the restoration funds from the 2010 BP oil spill. About $2 million from various other sources was used to remove a fisheries lab destroyed by Hurricane Katrina in 2005.

“It is one of the most historically and ecologically important barrier islands in Louisiana,” Gov. John Bel Edwards said when funding for this project and two others was announced in May.

Although the area was most recently hard hit by Hurricane Ida, with some newly placed sand eroding, overall the armoring did its job, and the rocks stayed in place, said Chad Madere, Madere Towing/Deep South owner.

“You can’t beat rock,” Madere said. “That’s what I told everyone.”

The armor wall doesn’t use just any rock, however. Most of the specialty boulders weigh between 12,000 and 14,000 pounds each, Madere said.

“If you can imagine putting three 55-gallon drums side by side, that’s about the size of the rock,” he said.

“It’s amazing how much that rock has traveled to get to its final destination,” Madere said. “From the mountains, where it was blasted, traveling by barge more than 500 miles downriver.”

The mv. Captain Herbert pushed the barges of stone downriver. Upon arrival, excavators the crews named King Kong and Godzilla, several smaller excavators and the 250-ton, barge-mounted crane Big Al, along with the mv. Lil Al, unloaded the rock, and two three-axle articulated dump trucks with a 28-ton rated payload helped place it.

The rock secures the dredged sand, which is piped a distance of 5 miles from the dredge R.S. Weeks along the floor of the Gulf of Mexico.

The armor wall protects West Grand Terre Beach from the forces of wind and water from Barataria Bay, also protecting the island’s historic fort, Fort Livingston, one of a chain of coastal forts built after the War of 1812.

Russell Smith, chief financial officer for Daulton Barge Leasing, Sales & Management, said, “When we reviewed the project specs for this job, we were hesitant to commit equipment due to the size of the stone. Daulton decks are built to haul big rocks, but handling armor stone of this size requires careful loading and unloading to avoid damage to the barge internals.  After visiting the project myself, we couldn’t have been happier with our decision. The Madere team navigated a number of project obstacles successfully and handled our equipment with care.”

The current phase of the project is scheduled to wrap up in November, with the entire project due to be completed by the end of 2022.