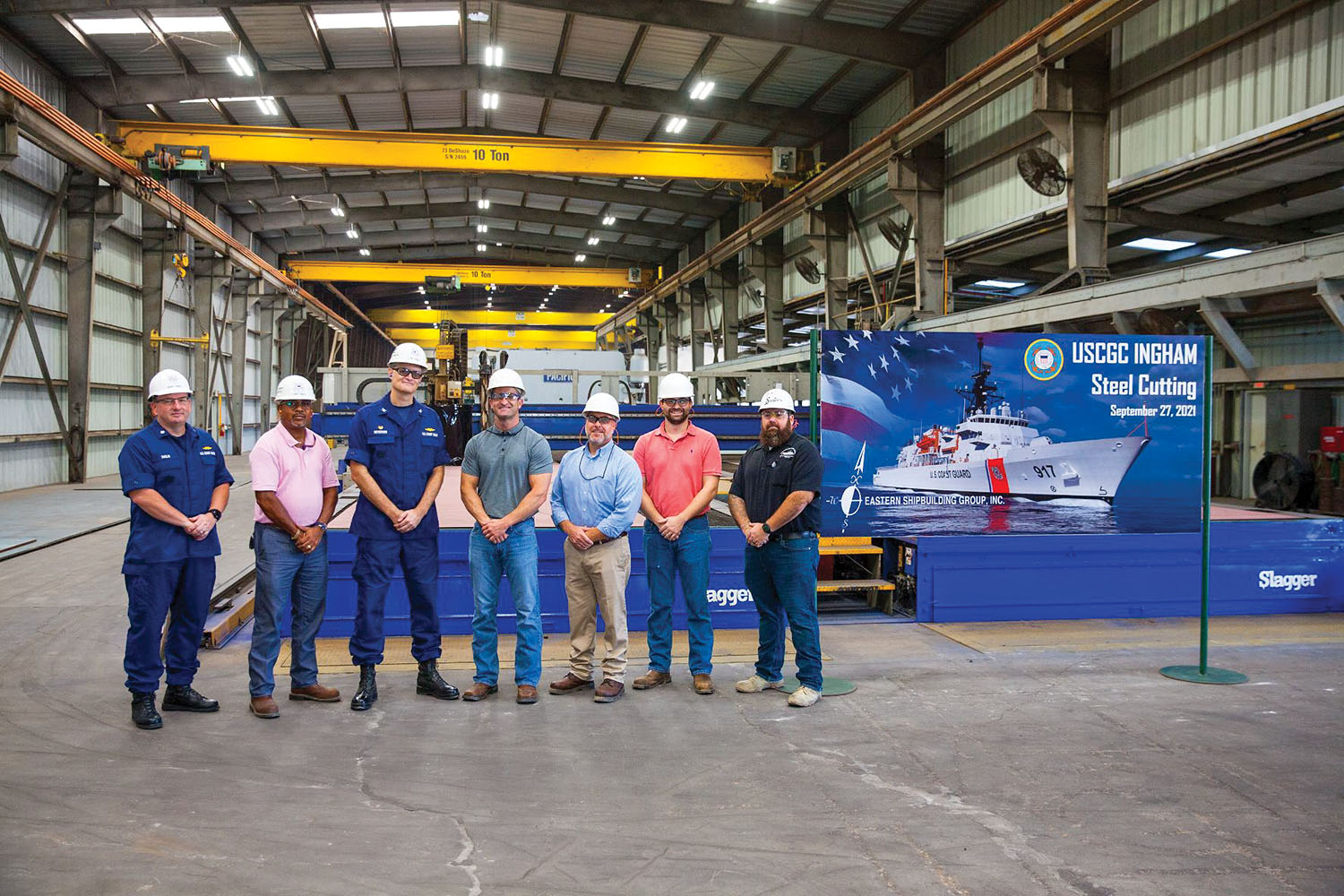 Eastern Shipbuilding Group (ESG), Panama City, Fla., began cutting steel September 27 for the U.S. Coast Guard Cutter Ingham, the third hull of the Heritage Class Offshore Patrol Cutter (OPC) program. ESG marked the occasion with a ceremony at its Allanton Shipyard, with leaders of the Coast Guard Project Resident Office in attendance. The first steel plates were cut by ESG personnel in the 103,000-square-foot steel and aluminum processing facility and transferred to the Nelson Street Shipyard for assembly and construction.

The OPC is designed to conduct multiple missions in support of the nation’s maritime security and border protection. The vessel provides a capability bridge between the national security cutter, which patrols the open ocean in the most demanding maritime environments, and the fast response cutter, which serves closer to shore. The OPC design includes the capability of carrying an MH-60 or MH-65 helicopter and three operational over-the-horizon small boats.  The vessel is also equipped with a highly sophisticated combat system and C5ISR suite that will enhance capabilities to execute the Coast Guard’s missions.

The first OPC, the Argus, is nearly fully assembled and remains on schedule and on budget. In May, the keel was laid for the second OPC, the Chase, and all long-lead-time materials have been ordered for a fourth hull.

“We are excited to begin the construction of Ingham, the third vessel of the Heritage Class OPC program,” said Joey D’Isernia, president of Eastern Shipbuilding Group. “Our dedicated workers and subcontractors are delivering exceptional quality and speed every day. It is our highest priority to get these superior vessels to the men and women of the Coast Guard so that they can carry out their important missions around the globe with greater capability and effectiveness.

“Our track record of consistent government shipbuilding execution and unmatched quality has given our customer the confidence they needed to bring yet another vessel onto the production line.  Our forward momentum continues to increase on this program, and our recent investments in our people and our facilities will ensure that the men and women of the Coast Guard receive these critical assets on the shortest timeline possible with the highest level of quality.”

ESG dedicated its Nelson Street Shipyard exclusively to the OPC program to ensure an unimpeded and hot production line experienced in constructing the vessels. The company has completed a launchway conversion and is making associated dredging investments at the yard to have a facility capable of launching and delivering two OPC-sized vessels per year. At its Allanton Shipyard, ESG has constructed a state-of-the-art C5ISR production facility to accomplish testing and integration of operational combat systems, equipment and simulators on premises prior to final installation on the vessel.  Later this year, ESG will commission a new aluminum superstructure fabrication and assembly hall at its Nelson Street facility.

ESG fully rebuilt its operational facilities following Hurricane Michael in 2018 and also expanded them, with  more than $42.5 million in infrastructure improvement investments.