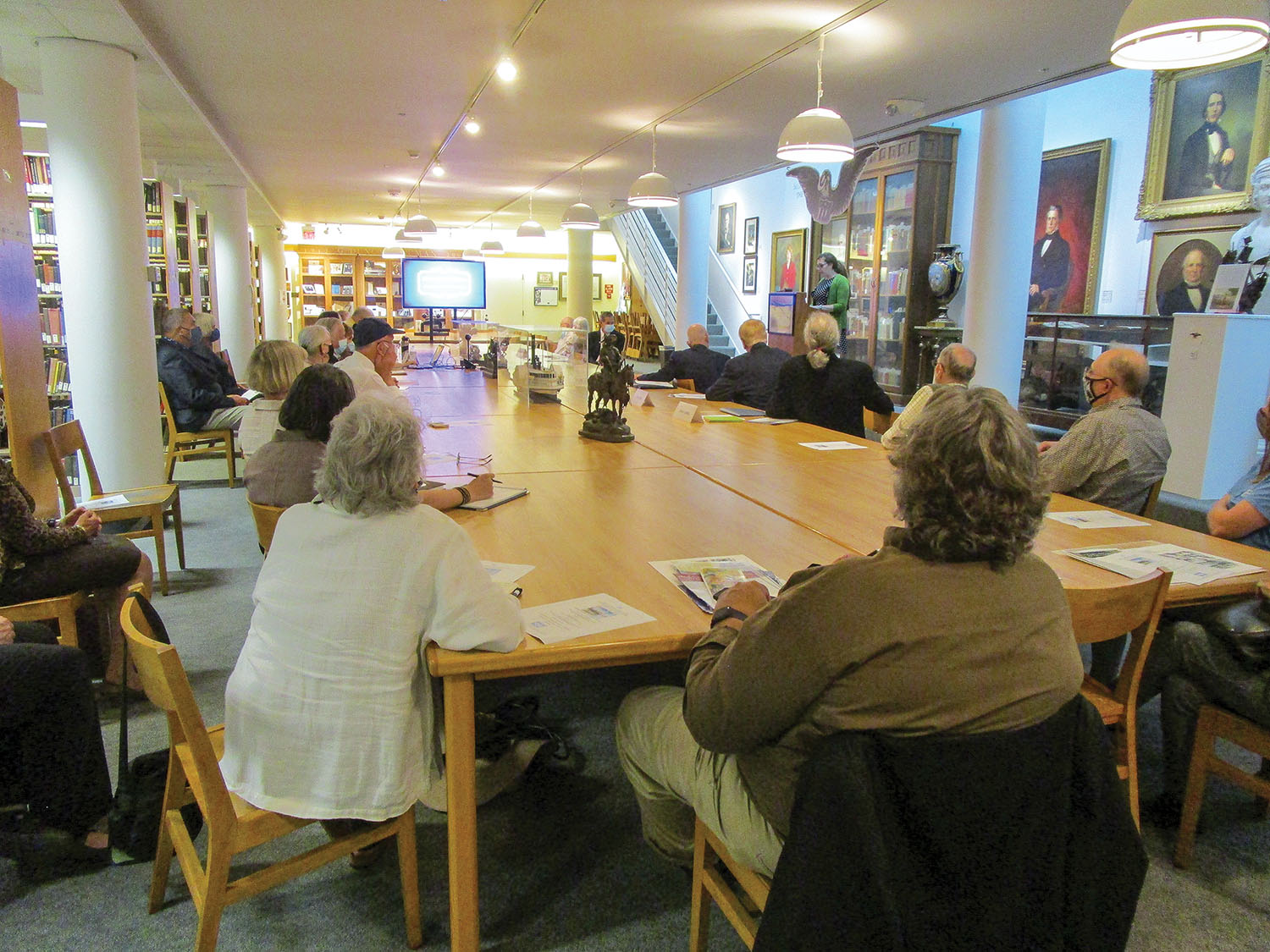 The Herman T. Pott National Inland Waterways Library, a special collection of the St. Louis Mercantile Library, recently recognized two individuals whose work has contributed to a better understanding of the American inland waterways. The Donald T. Wright Award was presented to Hon. Thomas C. Grady for his book The Lost St. Louis Riverfront, 1930-1943, while the James V. Swift Medal was awarded to David Lobbig, curator of environmental life at the Missouri Historical Society, for his Mighty Mississippi exhibit.

John Hoover, executive director of the Mercantile Library, made the presentations at a meeting of the Pott Library September 29.

Grady’s 195-page paperback, The Lost St. Louis Riverfront, now in its third printing, includes historic photographs that for the first time document the history of the area that is now the Gateway Arch National Park on the St. Louis riverfront. The businesses and individuals who occupied the buildings in this area are additionally described, bringing into focus the impact that the project had on the city and its riverfront.

The 6,000-square-foot Mighty Mississippi exhibit featured among its displays the pilothouse of the Golden Eagle steamboat, which had been dismantled and kept in storage at the museum for many years due to the lack of space. More than 200 artifacts showing the rich heritage of the river, starting with the Mississippian culture and the people who inhabited the Cahokia Mounds, were also on display, as were exhibits of the St. Louis fur trade and the steamboat era.

A notable sidebar to this year’s Pott Library event, which is biennial, was the Tribute to Donald Wright that was given by curator Sara Hodge, exploring the well-known publisher’s place in maritime literature. Hodge credited Wright with doing “more for river literature than any other person of the 20th century.”

She provided a backdrop dating back to the late 17th century journals of Marquette and Joliet, in which they described their voyage down the Mississippi and Missouri rivers, and into the 18th century, when Jonathan Carver detailed his travels along the Upper Mississippi River.

“By this time, American river literature was blossoming,” she said. “Publications continued pouring from the region into the 19th century.” Hodge cited the famous river exploration narratives of Lewis and Clark, and a publication entitled The Navigator, which was published by Zadok Cramer as a guide to navigating flatboats and keelboats down the Monongahela, Allegheny, Ohio and Mississippi rivers, a copy of which, by the way, can be found in the offices of The Waterways Journal.

An abundance of other river guides and literature followed, spurred on by steamboat travel, said Hodge. Then, “in the late 80’s, a trade paper known as The Waterways Journal was started in St. Louis. It failed after a few years, but the idea was picked up again as The River, with its first issue published on August 29, 1891. The paper was published by River Publishing Company with Abbott Veatch as the editor and business manager,” Hodge said.

There followed a period during which the paper ceased publication but then was revived, said Hodge, leading to its being bought by William Arste in 1894. He retired in 1921 after selling the weekly publication to Wright.

Referring to Wright, Hodge said “the river, like so many before him, found a permanent grip on his heart at an early age and never let go.” He was born in 1894 in Oil City, Pa. along the banks of the Allegheny River, and was a cub pilot after high school on a weekly packet and a clerk on the strs. Joe Fowler and Morning Star. After World War I, Hodge said, he worked on the snagboat Kentucky for the Corps of Engineers, earned his pilot’s license, and was a frequent contributor to The Waterways Journal.

“So, when Arste announced his retirement and the journal’s sale,” said Hodge, “Wright leaped on the opportunity, thanks to a loan from his father.” He bought it as it was struggling to stay afloat, visiting every major river town and city, selling advertising space and gathering news by day, and writing his stories and ad copy by night to keep the paper alive, Hodge said.

“Under his guidance the journal thrived and came to be the industry paper for rivermen across the country. For many” Hodge said, “The Waterways Journal became a sacred text.

“Wright’s contribution to the history of river literature is cemented in time as a fundamental block upon which all future works will be built, and the story of his success is apparent as his journal continues to thrive today under the dedicated current leadership.”