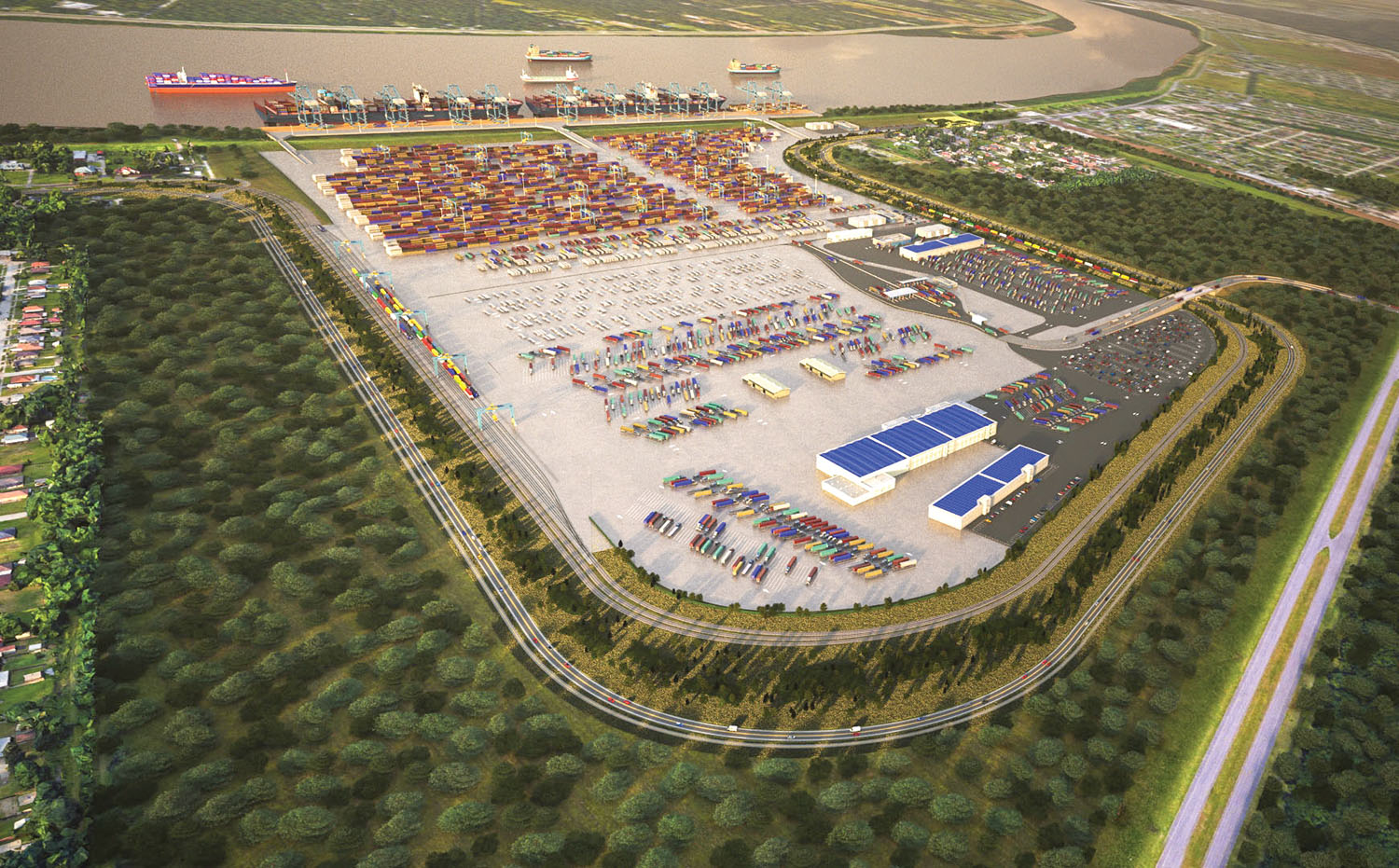 The Port of New Orleans is set to welcome four brand-new gantry cranes to expand capacity at its Napoleon Avenue container terminal, while it forges ahead on plans for a new location that will better position it to take advantage of river-deepening operations currently underway and meet logistics challenges of the future.

The cranes are set to arrive from China on December 9, according to Todd Rives, vice president and chief commercial officer of Port NOLA, and should see service in the first quarter of 2022. The new cranes will expand container capacity from 840,000 TEUs today to more than 1 million TEUs. The port is also taking down a transit shed, extending a rail line at the facility and modernizing it with 200 more reefer plugs, new concrete and a new export gate.

“The steamship lines are very encouraged” by the capacity expansion, said Matt Gresham, chief governmental relations officer for the port.

The port is also moving ahead on plans for its new container facility at the Louisiana International Terminal Project at Violet, La., located in St. Bernard Parish downriver from the port’s current facilities—and the Crescent City Connection Bridge, with its 160-foot air draft. The property was acquired in December 2020. In August of this year, the Board of Commissioners of the Port of New Orleans unanimously approved a contract for program management and program control services to HDR Engineering Inc., a global engineering and consulting firm, as part of the multi-year due diligence and permitting process. “Violet checked every box,” Gresham said.

The site in Violet was chosen after extensive site assessments that included navigation studies. It is situated on the east bank in a naturally self-scouring bend of the Mississippi River that requires little dredging and is deep enough to accommodate the new generation of oceangoing vessels. The Violet site is also located within the federal Hurricane Risk Reduction system that proved successful when Hurricane Ida struck southeast Louisiana as a Category 4 storm in September.

Port NOLA has begun community engagement to share information and gather input as it enters the multi-year permitting process. In the meantime, the port will close on back acreage adjacent to the new property, which is under a purchase agreement with landowners. The port is also negotiating with potential financial and operating partners for the Violet terminal as part of a competitive process that includes several qualified terminal operators, carriers and others. “Our goal is to deliver the best investment and return to the state of Louisiana and the local community,” Rives said.

Once the Violet facility is up and running by 2027, it would initially support 600 new high-paying, industry-related positions in St. Bernard, and more than 2,500 jobs statewide. Within five years, those numbers would jump to more than 2,0000 jobs for St. Bernard and nearly 7,000 statewide.

The recent passage of the infrastructure bill and news about supply chain snarls have helped keep Americans focused on the importance of freight infrastructure over the past few months. Gresham said the bill could open up further grant opportunities for the port. Mitch Landrieu, former mayor of New Orleans, has been named by President Joe Biden to oversee the distribution of the infrastructure investments, which are in addition to regular appropriations.

Will the developments in the Port of New Orleans help it grab business from the overloaded ports of the West and East coasts? During Hurricane Ida, the port showed that the more than $14 billion investments in flood protection by the Corps of Engineers after Hurricane Katrina proved their worth. None of the facilities within the protected area of strengthened levees suffered major damage from Hurricane Ida. Port operations were up and running within four days, although some facilities had to wait longer for electricity to be resumed.

About 70 percent of New Orleans’ total port business is exports. Rives said one of the port’s goals is to grab more import business. The biggest container carriers stuck outside of Long Beach and Lost Angeles are too big to transit the Panama Canal. But the traffic jams on the coasts are causing a “cascading” of smaller container vessels to less-congested ports, offering an opportunity for Gulf Coast ports. The Port of New Orleans is served by three of the big ocean carrier alliances and offers 13 weekly services with 65 direct port connections. “We have to attract more Far East capacity,” Rives said. He said New Orleans could serve as a second port of call for vessels unloading in Houston, especially for vessels in the 12,000- to18,000-TEU range.

Rives pointed to the Port of Mobile, Ala. In October, Maryland-based MTC Logistics  formally opened a new refrigerated cargo facility in Mobile, a $61 million project that will add 75 new jobs and has growth potential for the future. The project has helped spur development related cold-chain logistics projects in the surrounding area. Walmart has spent $135 million to develop a distributions “supercenter” in Mobile, and Hyundai has helped develop Mobile as an auto-export center. “We’ve been working very closely with Louisiana Economic Development on projects that will replicate that success,” Rives said.

The port has been working with SEACOR and direct consumer outreach to attract more import container-on-barge business. “We’ve been talking with a lot of retail customers that would benefit from having a COB service to Memphis or St. Louis,” Gresham said. The new planned container facility in Violet will have a dedicated COB terminal at one end. There is a dedicated berth at the Napoleon Avenue facility as well.

The Port of New Orleans currently has three terminal operators managing its container facilities: Ports America, Terminal Investment Ltd. and Ceres. It’s possible that might be consolidated into one operation in the future Rives said, depending on permitting.

Bulk cargoes, which almost disappeared from New Orleans at one point, have been returning, Gresham said. As warehousing space on the East Coast and Houston became full, and containers became hard to find, some cargoes that had been containerized, like plywood, went back to bulk carriage. Rubber and steel have also been strong cargoes for the port in recent months.

“Once the Violet facility is up and running, we expect it to have many positive downstream effects,” Gresham said. Rives adds that all ports and states have to be “big ship ready” to keep up with the logistics challenges of the future. “We’re trying to build for at least the next 25 years.”