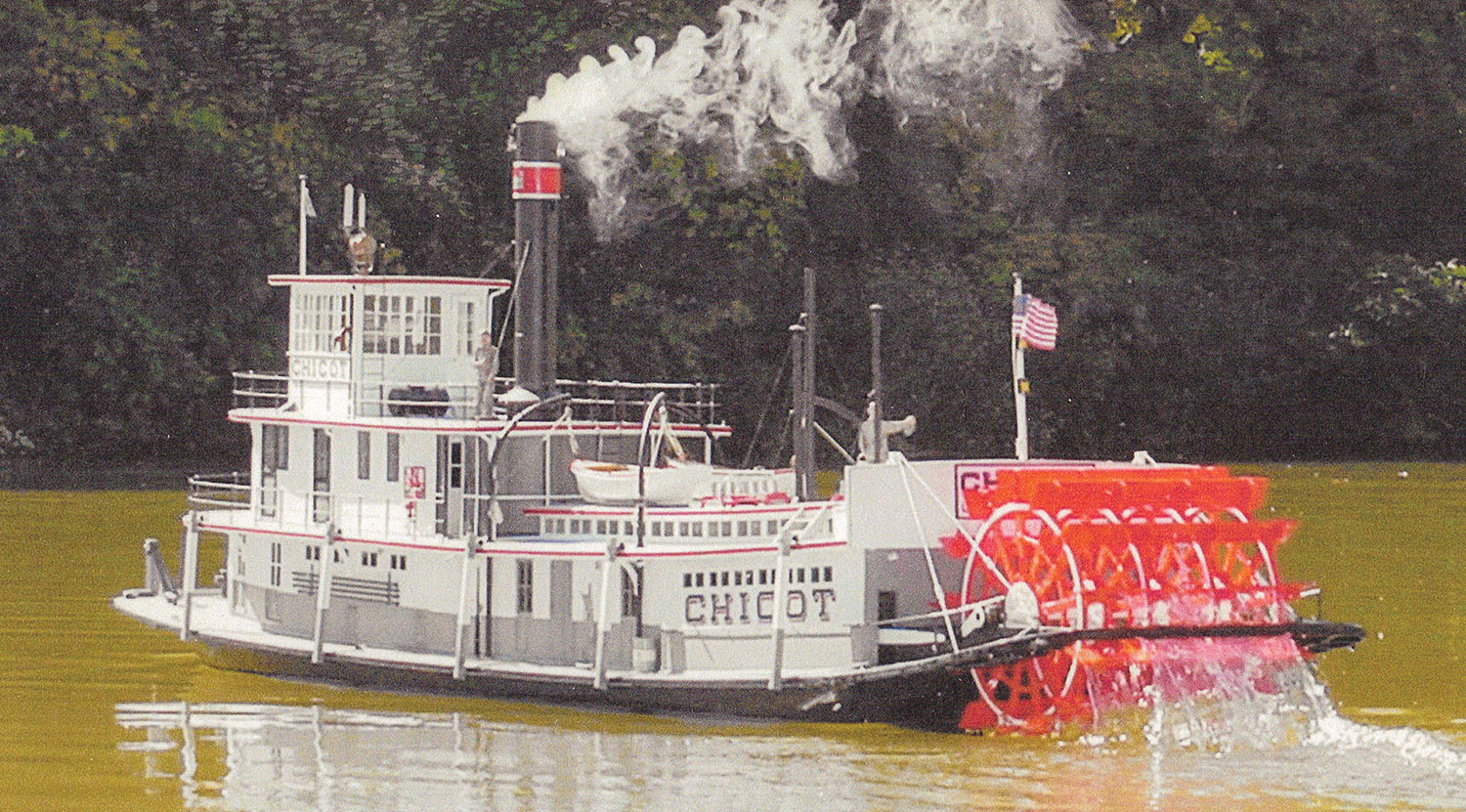 The Howard Steamboat Museum at Jeffersonville, Ind., was recently the site of a riverboat model extravaganza. The museum proudly displays an excellent model of the steam towboat Chicot, the generous gift of master model builder John L. Fryant of Maineville, Ohio. The 63-inch replica is the second model creation by Fryant to grace the museum collection, the other being the fictional sternwheel packet boat New Big Sandy. The Chicot model was scratch-built in 1999 and originally radio-controlled.Built by the Howard Shipyard in 1925, the Chicot was constructed on a steel hull that measured 126.5 feet in length, 23 feet in width and having a depth of 4.5 feet. Two return flue boilers supplied steam to engines having 10-inch cylinders with a 5-foot stroke. Owned by the U.S. Army Corps of Engineers, the boat operated in the Vicksburg district and was primarily used as a dredge tender and towboat for revetment projects on the Lower Mississippi River. In 1929, the vessel was under the command of Capt. Josh McMurray, with J.B. Henry serving as chief engineer.

The Chicot was named for a county (founded in 1823) in Arkansas and ran for the government until sold in June 1941 to Commercial Barge Lines at Evansville, Ind., and renamed Jerome D. Beeler. In 1943 the name was changed to Alec Parnie in honor of the firm’s general manager.

By early 1946, the towboat was sold to Capt. C.C. Stone of Point Pleasant, W.Va., who planned to change the propulsion to diesel; these plans never materialized, and the superstructure was removed. The hull of the sternwheeler was sold to interests in the Huntington area and survived into the late 1960s; it ultimately sank near old Lock No. 27.

Built earlier by the Howard yard in 1922, this towboat was nearly identical in size and appearance to the Chicot. Named for a town in Louisiana, the vessel also was owned by the Vicksburg district of the U.S. Army Corps of Engineers. In 1923, the crew included Capt. Aubrey Haynes II, master, and Wilson Hall, chief engineer. By 1929, the boat was under the command of Capt. Peter Antrainer, with S.R. Oliphant as chief engineer.

The Tallulah was eventually sold to the Patton-Tully Transportation Company at Memphis. In 1943, St. Louis Ship converted the sternwheeler into a twin-propeller diesel towboat for Commercial Barge Lines. Renamed Walter F. Carey, the vessel had a shortened hull and bore little resemblance to its original appearance.

Gracing the cover is John Fryant’s superb model of the Idlewild (today’s 107-year-old Belle of Louisville) as it appeared in 1915. The model today resides at the Smithsonian.

Cost of the popular calendar is $15.95 with a shipping fee of $4.50 for mail orders. For more information visit: www.draftware.com/calendar.

Thanks to Capt. Steve Huffman for his annual contribution to river history.

The Christmas open house at the museum is scheduled for Sunday, December 5. Located at 1101 East Market St., the museum is housed in the 22-room mansion completed in 1894 and occupied by the Howard family, who operated the shipyard across the street (formerly Jeffboat) from 1834 until 1941. Further information may be accessed at www.HowardSteamboatMuseum.org.