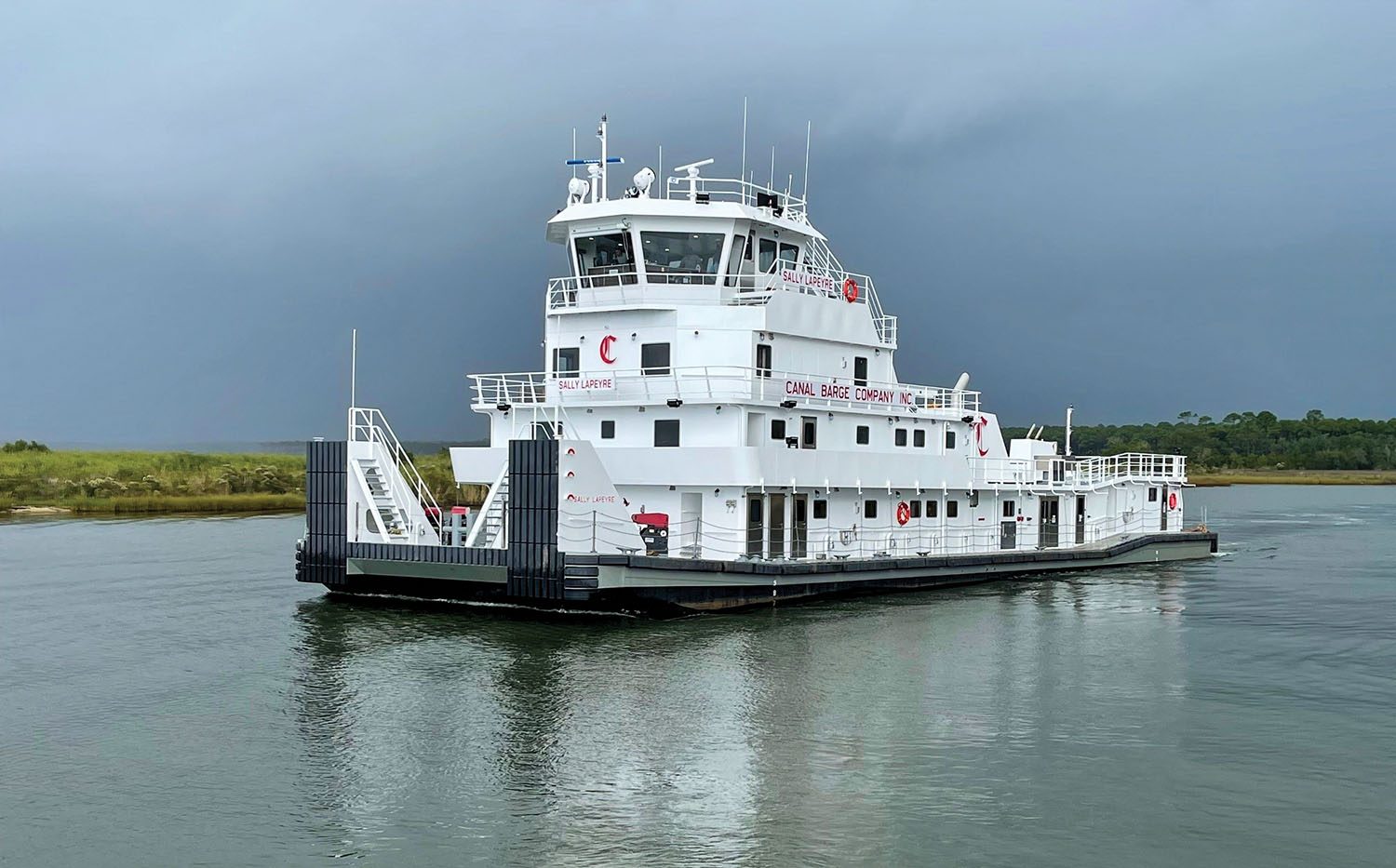 Canal Barge Company, the diversified, family-owned marine transportation firm founded in 1933, put into service recently the first of two nearly identical vessels, the mv. Sally Lapeyre. It is a twin-screw, 4,400 hp. towboat built by Steiner Construction Company, located in Bayou La Batre, Ala. The New Orleans, La.-based barge line is expecting delivery of the Lapeyre’s sister vessel, the mv. Lizzie Lane Peus, in March. The vessels differ only in that the first is powered by Tier 3 engines, while the second will have Tier 4s.

The Sally Lapeyre, delivered from Steiner Construction November 9, is built on a hull that measures 142 feet in length and 44 feet in width. It has a depth of 11 feet, drawing 8.5 feet when fully loaded with fuel, water and lube oil, the capacities for which are 75,900, 14,000 and 800 gallons, respectively. The hull is protected by Schuyler fendering.

The Lapeyre is powered by twin Cummins QSK-60 Tier 3 engines having 2,200 hp. each at 1,800 rpm. from Cummins Mid-South. They turn Sound 100- by 90-inch, five-blade stainless steel propellers supplied by Texas Wheel Works on 9.75-inch shafts with Drymax 11-inch seals. Reduction gears are Reintjes model WAF 873 with a ratio of 7.455:1, supplied by Karl Senner Inc.

Auxiliary power is from a pair of Cummins 175 kW, QSB7 generator sets controlled by a paralleling, auto-start switchboard that, while it is the norm on blue-water applications, is somewhat unique on inland towboats like the Sally Lapeyre, according to Mike Stone, CBC’s manager of vessel engineering.

“Most towboats have two electrical A/C generators, with one running at a time,” Stone said. “It is good practice to switch generators at a given interval (5, 10 or 20 days, depending on the operator). When this switch occurs, older boats equipped without paralleling capability would briefly go dark while the other generator is brought online, and the power is restored. The setup with the paralleling switchboard allows both generators to be online and connected simultaneously for a short period of time. The switch is then made without any power supply interruption to the boat.

“This provides an additional level of safety and comfort, as the system will not black out the boat on a regular basis, per its design,” Stone said. The switchboard and engine alarm system were supplied by Eagle Control Systems, based in Harvey, La. The generators are cooled by Fernstrum Gridcoolers, as are the main engines.

Some of the other more unique features of the new boat are the tow access steps arranged transversely on the bow, which is a Canal Barge standard, and the floor-to-ceiling pilothouse windows. The pilothouse has a 32-foot eye level, which, when combined with the large forward windows and the canted side of the texas deckhouse, give the pilot maximum visibility.

Additionally, Stone said, the vessel’s interior utilizes soft-core paneling instead of wood framing, which provides “a superior level of structural fire protection for the crew.” Below the wheelhouse is a 4-foot fiddley that contains all the electronics and HVAC equipment.

Heading up the list of electronics are a Furuno FR1908VBB radar with a 19-inch monitor, a Furuno 628 depth sounder, AIS, bridge alarm and satellite compass; a Koden MDC radar; a Zenitel intercom; an Intellian satellite TV system; and Icom radios, all supplied by Wheelhouse Electronics. The HVAC equipment is from R.S. Price & Son.

There are four two-person bunkrooms for the crew with a head and shower for each bunkroom, also a lounge, with a computer area, and a workout room. Adjoining the engineer’s stateroom is an engine control office, and next to the captain and pilot staterooms, on the same deck as the guest stateroom, is a well-furnished lounge and computer area.

Wastewater is treated by a Seahorse MSD, with a chlorinator to treat gray water, from DiSalvo Marine. The fire alarm and fire suppression systems were provided by Hiller Companies.

The fact that one of the boats has Tier 3 mains while the other has Tier 4—coupled with the need to have similar piping systems between the two boats—was one of the biggest challenges, Stone said. “Using the same arrangement and hull envelope to try to locate the DEF (diesel exhaust fluid) tanks and SCR system for the second boat presented an unusual hurdle.”

From the vessel builder’s perspective, Cole Elmore of Steiner Construction said dealing with the extra engineering requirements inherent in using the latest emissions control technology was “definitely interesting. Steiner and Canal worked closely with Cummins to ensure a proper install,” he said.

The mv. Sally Lapeyre is named for Sally Polk (Huger) Lapeyre, the oldest daughter of Eugenie and Killian L. Huger (a former CBC executive) and a granddaughter of CBC founder Joseph Merrick Jones Sr., all of whom are namesakes of other CBC towboats. Married to James “Jay” Lapeyre, she has three children, six grandchildren and another grandchild on the way.

Sally Lapeyre was also the namesake of the former mv. Sally Polk, which CBC acquired upon construction in 1957 and sold in 1991. Like the modern-day Sally Lapeyre, the Sally Polk was a mid-range, 3,600 hp. towboat, and a valued and versatile boat in CBC’s fleet for many decades.

“Sally is a treasured member of the Canal Barge family,” said Merritt Lane, CBC’s president. “We are proud to have her name back on the river.”

Canal Barge has grown from one vessel into a diversified marine transportation firm with close to 50 towboats, the newest being, of course, the Sally Lapeyre. Its fleet of more than 900 barges for both dry and liquid cargoes, as well as a fleet of heavy deck barges for project cargoes, operate throughout the inland waterways. The company also owns a bulk liquid storage terminal near Chicago, as well as a wholly owned subsidiary in Lemont, Ill., that offers towing, fleeting and shipyard services.