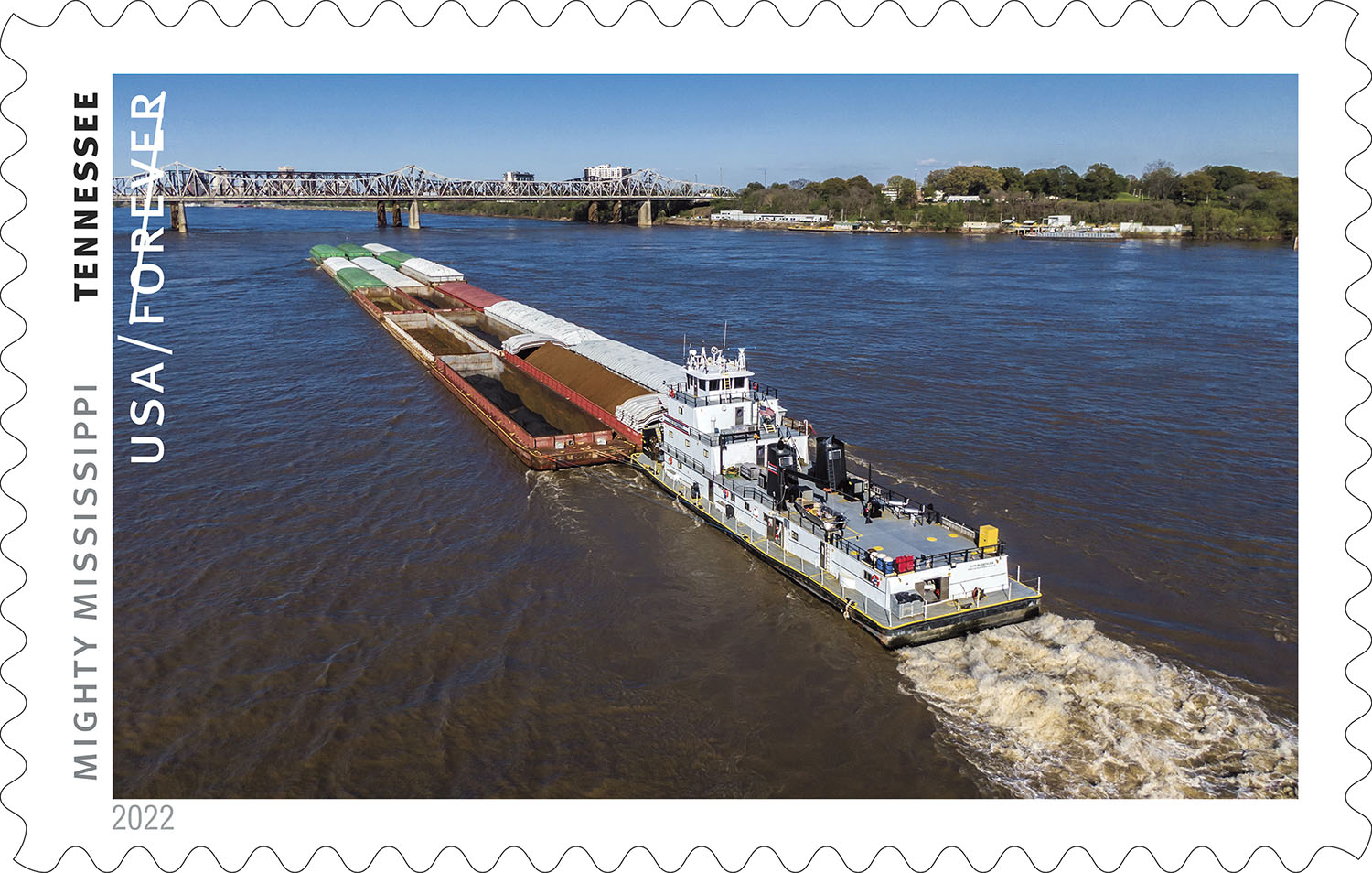 The portfolio of 10 photographic stamps is collectively called “The Mighty Mississippi.” It includes one stamp representing each of the states along the river’s course. On the back of the pane is a map of the central United States detailing the river and its major tributaries.

“Our stamps are miniature works of art that highlight the American experience,” U.S. Postal Service spokeswoman Sara Martin said. “We receive about 30,000 suggestions annually for stamp ideas. Roughly 25 to 30 topics are chosen. The process takes at least three years from the time the idea is submitted until the proposed stamp design is released. The Citizens’ Stamp Advisory Committee (CSAC) reviews the suggestions and makes their recommendations to the Postmaster General. The committee, appointed by the Postmaster General, consists of individuals having a strong background in history, science, technology, art, education, sports and other subjects of public interest.”

A stamp collection featuring the Mississippi River was a natural fit for the postal service in choosing designs important to the country, Martin said.

“The Mississippi River is at the core of the nation’s heritage and is variously referred to as America’s backbone, its heart and its soul,” she said. “This issuance honors the Mighty Mississippi with a portfolio of 10 exquisite photographic stamps, each representing a state along the course of the river. With five rows of two stamps each, the pane’s arrangement corresponds to the states’ north-south and west-east sequence.”

The stamps are being issued as Forever stamps, which means they are always equal in value to the current First-Class Mail 1-ounce price. The Postal Service receives no tax dollars for operating expenses and generally relies on the sale of postage, products and services to fund its operations, Martin said.

Wisconsin is represented by an autumn view of the Great River Road in a photo by Jay Olson-Goude.

The Iowa stamp shows the steamboat American Queen near the city of Bettendorf in a photo by David Sebben.

In Illinois, a sailboat passes limestone bluffs adorned with fall foliage in a photo by Walter Blackledge.

Missouri is represented by the St. Louis skyline at sundown, punctuated by the Gateway Arch in a photo by Evan Spiler.

Kentucky is seen in the city of Wickliffe, just downriver from where the Ohio River spills in as depicted in a photo by Larry Braun.

An Arkansas levee curves parallel to a river meander near forest and farmland in a photo by the Mississippi River Parkway Commission.

In Tennessee, a towboat pushes an immense tow of barges upriver toward Memphis in a photo by M.J. Scanlon.

The New Orleans skyline and the twin-span Crescent City Connection bridges represent Louisiana in a photo by Sean Pavone. In Mississippi, within the wilds of a delta bayou, cypress trees seem to drip with Spanish moss in a photo by Ron Levine.

“By the end of an epic three-month, 2,300-mile journey, the Mississippi River’s source waters—an unassuming trickle from Minnesota’s remote Lake Itasca—have been joined by streams pouring in from much of the nation,” Martin said. “The river’s waters that pour into the Gulf of Mexico come from a drainage basin of 1.2 million square miles, about 40 percent of the land in the contiguous 48 states.

“With relentless progress, diverse influences and determined wildness, the Mississippi River perfectly epitomizes the nation it shapes and serves.”