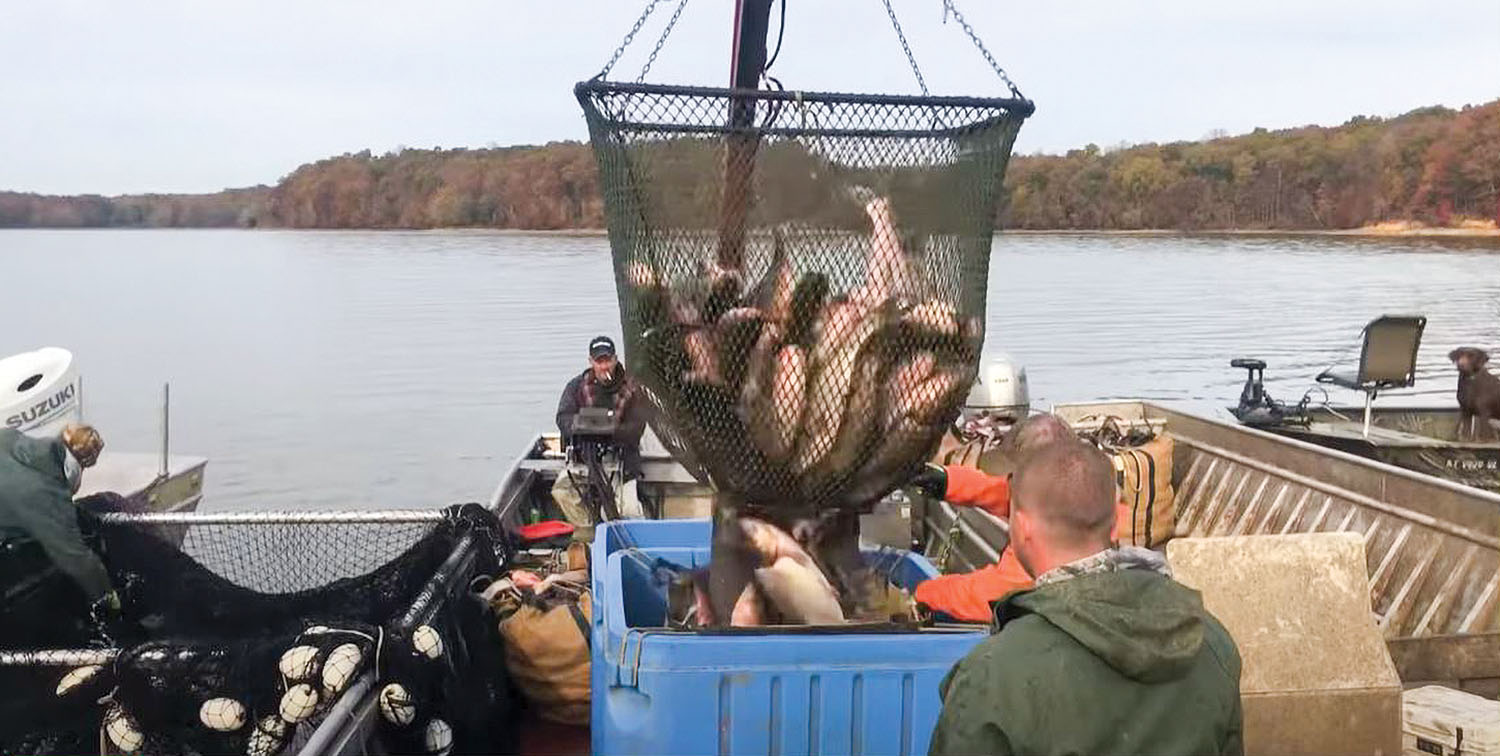 A Kentucky county official is helping to promote the benefits of a new method of removing invasive Asian carp via a video posted online and a new subsidy in his county.

Lyon County Judge-Executive Wade White recently wrote a letter to Senate Minority Leader Mitch McConnell asking him to prevent the U.S. Geological Survey from using its modified unified method of carp removal in Kentucky Waters. The method involves teams of boaters placing a net across the mouth of a bay, and then using sounds, lights and channels made from smaller nets to force the carp into a smaller portion of the bay for removal. White said the method costs too much for the amount of carp harvested and instead suggested promoting commercial fishing methods for fish removal.

On November 12, White posted a video showing commercial fisherman Wade Robbins using a new method, which he has dubbed trap netting, on Lake Barkley, an impoundment of the Cumberland River in western Kentucky and northwest Tennessee. Robbins has been working with the Kentucky Department of Fish and Wildlife Resources (KDFWR) to test the experimental method, according to the video.

White said Robbins and his crew caught 27,000 pounds of carp in the four-hour period on the day he watched them work.

“That’s an incredible amount,” he said.

White said the by-catch of native species during that time was two fish: one redear and one channel catfish. Both were returned to the water unharmed, he said.

White said in his letter to McConnell that the modified unified method used on Kentucky Lake caught 79,000 Asian carp over the course of two to three weeks. He estimated that the modified unified method cost taxpayers roughly $1 million. Last year, a depletion study using the same methods resulted in the harvest of 38,000 pounds of carp, although the depletion study’s goal was primarily to determine the method’s effectiveness and not to remove carp.

In the 3-1/2-minute video posted to YouTube, White explains Robbins has worked with KDFWR to perfect the method over the past year. The video shows nets that Robbins and his crew set into the water to catch the carp. A crane then lifts the carp out with a smaller, square net with a trap door in the bottom to dump them into a bag, which is monitored so that any game fish may be sorted out and returned to the water.

White said within two hours of setting their traps, Robbins and his crew were already pulling carp out of the water.

“It’s amazing to see how many he was able to trap within just two hours,” he said. “This is a great experiment. It has worked. It’s what needs to be done more in Kentucky, and our monies coming into Kentucky need to go to things like this, to our commercial fishermen who are dragging these out by thousands of pounds a day. This is where the heart of the war on carp is taking place: right here.”

White also expressed his appreciation for KDFWR taking the time to work with Robbins and his crew on the experiment “because it was very important to find new and better ways to bring these fish out of our water at a faster rate, and I believe they have found that. It’s pretty incredible to see what they’re doing.”

He noted that although he considers the method extremely successful, Robbins and his crew are not able to participate in current state subsidies for removing Asian carp from Kentucky waters because it is still considered an experimental process.

“That’s a shame,” he said, indicating that subsidies for these types of methods could incentivize anglers to use new methods that could prove highly effective in removing the fish. Currently, White said, trap netting is more expensive than more traditional harvest methods.

White added that even though Robbins doesn’t receive a subsidy from the state, the American Fishing Tackle Company (AFTCO) has made a $10,000 donation to the Lyon County Industrial Development Authority for a 4-cents-a-pound subsidy that can be used for trap netting. The funding has allowed the removal of an additional 250,000 pounds of carp, according to the AFTCO website.

Asian carp are a non-native fish species introduced into small ponds in the Midwest in the 1960s that spilled over into the country’s river system by the 1970s. Since then they have spread to portions of 45 states, according to AFTCO. The fish jump out of the water, routinely hitting those working and playing on the country’s rivers and lakes and damaging expensive equipment. Environmentalists say they also eat the plankton, algae, clams, mussels and worms needed by native game species, leading to a decrease in their populations. As a result, White has said previously, many bass tournaments have gone elsewhere rather than deal with them, hurting the economy of states like Kentucky and Tennessee along with impacting tourism to the region’s rivers and lakes.

The video is available to view at www.youtube.com/watch?v=8MmkkUKbKwA.