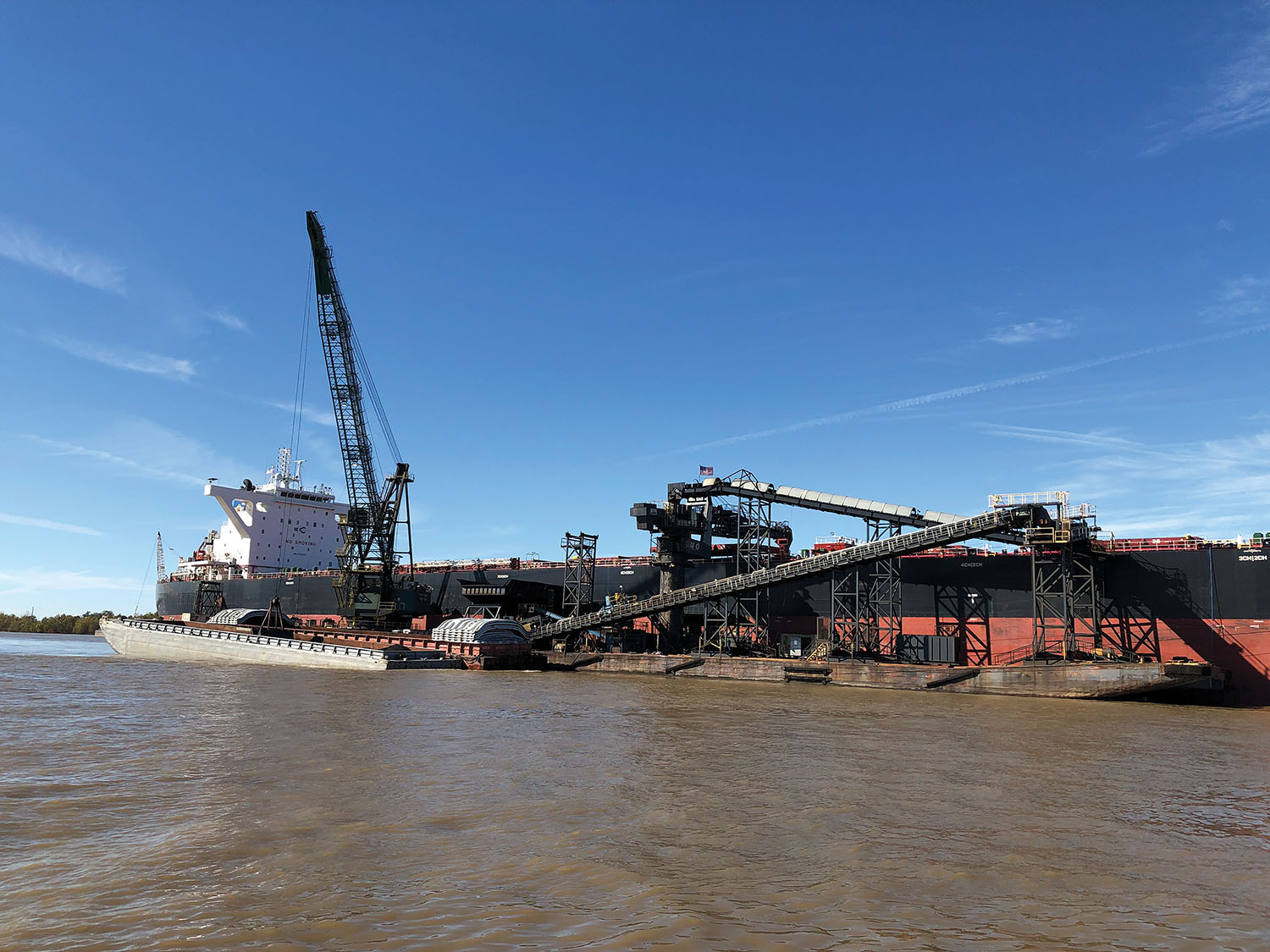 Dos Santos International is providing a high-angle conveyor for a floating terminal on the Mississippi River.

Cooper Consolidated’s floating transfer station in New Orleans, La., was originally designed for carbon products. To convert the unit into a grain transfer station, additional components needed to be added to meet USDA/FGIS requirements on weight and sampling. Space was limited on the barge-transfer unit, and new technology was needed to bring the product from under a newly added weight-bin on the deck of the barge back to a certified sampling system mounted 55 feet above deck and only 100 feet away, according to Dos Santos International (DSI).

The owner had a choice between a bucket elevator or the DSI Sandwich Belt and chose the DSI belt system because of its ability to elevate the products being handled over the short distance and because of the gentleness of the conveying.

The DSI Sandwich Belt provides 18.5 meters of lift at a 50-degree incline, allowing the elevation of hard grains, such as corn and soybeans. It uses two standard, smooth-surfaced conveyor belts, face-to-face, to gently but firmly contain the product being carried. This makes steep angles possible and also offers a spillage-free, environmentally sound operation because the material remains secured between the belts.

By the nature of its “hugging” pressure, the Sandwich Belt conveyor is known to be a gentle system, DSI said. However, concerns about material degradation had to be addressed at the beginning of development.

Damage testing was performed on three USDA Grade 1 grains. Five one-bushel samples were loaded into oversized burlap sacks from each of a common batch of soybeans, wheat and seed corn.  The first bushel of each grain was set aside to serve as the control sample, while the next four bushels were conveyed at 60 degrees, the full length of the 1,524-mm. (60-inch) belt width demonstration unit, two, four, six and eight times respectively for corresponding conveying distances of 45.7 meters, 91.4 meters, 137.2 meters and 182.9 meters.

The results showed no damage to any of the three grains tested, as a result of conveying in the high-angle conveying unit.

It is with this confidence that several Sandwich Belt high-angle conveyors have been successfully installed, including on self-unloading ships and ship loaders, DSI said. Additionally, the company noted, DSI Sandwich conveyors are capable of higher conveying speeds and greater capacities than other high-angle carrying methods. With the availability of wider belts and accompanying hardware, capacities greater than 10,000 t/h can be achieved with a DSI Sandwich conveyor. High angles of 90 degrees are typical, and lifts of 300 meters are easily accomplished. Meanwhile, the use of all conventional conveyor parts ensures high availability and low maintenance costs as well as interchangeability of components and fast delivery of replacement parts.

Caption for photo: Dos Santos International is providing its Sandwich high-angle conveyor system as part of the conversion of a floating terminal for carbon products into one for grain in New Orleans. The system is designed to use two facing conveyor belts to “hug” the grains while lifting them without spillage or damage. (Photo courtesy of Dos Santos International)