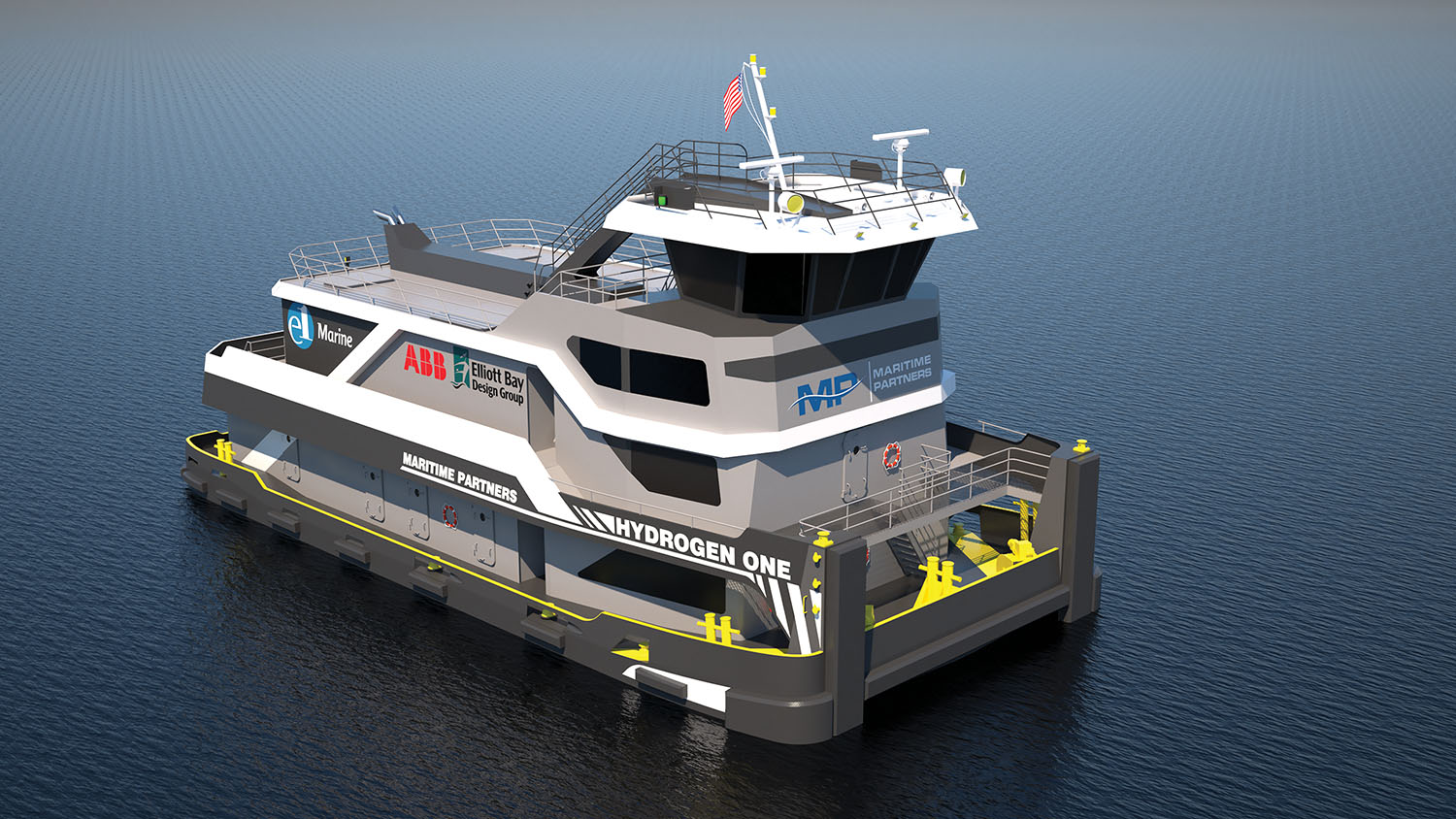 After extensive study and analysis, the maritime partnership e1 Marine has come up with a green sustainable fuel solution for inland towboats it thinks will take the lead in both cost and emissions advantages and serve not only as a test case and example for the inland waterways, but as an inspiration for other sectors as well.

The “future fuel” is methanol, converted to hydrogen at the point of consumption to overcome the cost and difficulties associated with transporting compressed hydrogen.

On November 30, the partnership, together with ABB and Elliott Bay Design Group, announced that the mv. Hydrogen One, the world’s first methanol-fueled towboat, will join Maritime Partners’ fleet and become available for charter in 2023 to meet the pressing demand for sustainable towboat operations.

The partners stress that once the vessel is built, it will be ready for operation using existing methanol distribution networks. Unlike some other proposed alternative fuels, like liquefied natural gas (LNG), methanol does not require the buildout of a brand-new distribution and storage infrastructure. “Methanol is already widely available and can use existing river infrastructure,” said Eric Livingston, Maritime Partners’ newly promoted chief operating officer, in a Facebook presentation on the mv. Hydrogen One at the Workboat Show. “LNG is not a good fit for the inland marine industry,” he added.

The partners believe that their methanol-to-hydrogen solution will be cost-competitive with Tier 4 diesel engines—and much cleaner.

“Decarbonizing the towboat sector poses substantial challenges, particularly due to towboats’ inherent size, space and weight limitations,” the four companies said in a joint press release. “Batteries are only suitable if you operate on fixed routes and can recharge daily, and a towboat’s limited storage capacity restricts the use of pressurized or cryogenically stored gases as fuels. There are also very few dockside facilities to load such marine fuels, which severely constrains a vessel’s range and functionality.”

But transporting methanol instead of hydrogen removes those cost and size limitations, Livingston said. The partners thoroughly investigated a variety of “future fuels,” including hydrogen. They found that it was cost-prohibitive to transport hydrogen—but not methanol.

The onboard conversion of methanol to hydrogen fuel will be done by a fuel cell developed by e1 Marine.

The mv. Hydrogen One will be fully compliant with IMO 2030 standards and meet all requirements of the U.S. Coast Guard’s Subchapter M regulations. The vessel was designed by Elliott Bay Design Group using proven, efficient technology throughout, from ABB’s electrical power distribution and automation to e1 Marine’s methanol-to-hydrogen fuel cell. It will be able to perform at standard operational speeds for up to 550 miles before it needs to refuel.

Methanol is already a common towboat cargo and is available in 88 of the world’s top 100 ports. This availability enables operators to refuel safely almost anywhere without the need for costly diversions, the companies said. The mv. Hydrogen One’s use of e1 Marine’s reformer technology generates hydrogen from methanol on-demand, which also makes it much safer than transferring and storing hydrogen directly, and the ship’s crew will require minimal additional training to use the technology.

The e1 Marine hydrogen generator solution is cost-effective today, the partners said, because it consumes 35 percent less energy than diesel generators, and even while running on standard methanol the hydrogen generator/fuel cell set produces zero particulates, zero NOX, zero SOX emissions and 28 percent less CO2 than a diesel generator. It is currently available in power outputs ranging from 50 kW to 2 MW.

“Shipowners have been understandably reluctant to commit to low-carbon fuels until the infrastructure is available to refuel their vessels,” said Austin Sperry, cofounder and president of Maritime Partners. “The mv. Hydrogen One solves that problem by using methanol, which is safe and readily available worldwide. When the mv. Hydrogen One joins our fleet of 1,600 vessels, it will not only provide excellent emissions reduction capabilities but highly functional, reliable and cost-effective operations.”

“The U.S. towboat market is one of the most traditional in the world, so it’s important to recognize what this represents: the first step in a shift from diesel electric to methanol electric and a major advance toward zero emissions,” said Dave Lee, senior account manager for ABB Marine & Ports. “Governed by ABB’s power management and distribution technology, the system consumes methanol fuel on-demand. This philosophy is much more efficient than a traditional towboat, where you need both main engines, as well as a generator, online at all times. Through this design and our technology, we’re enabling not only huge operational and cost efficiencies, but making the most environmentally friendly mode of transport even more sustainable.”

“The mv. Hydrogen One is the model for what is likely to be the only practical and commercially available technology that will enable smaller vessels to run for multiple days on a single fuel load and without the need for dedicated refueling facilities,” he said. “Our naval architects have optimized the balance between reformers, fuel cells and batteries to maximize range and power while minimizing operational costs. This design and the technologies it uses can be easily scaled to suit any vessel with a similar need to operate on variable routes with multiple-day transit times and further enhances Elliott Bay Design Group’s market-leading expertise in this growing sector.”

Robert Schluter, managing director of e1 Marine, said, “Converting methanol to hydrogen reduces the CO2 output, and our reformer technology eliminates the complexities of direct fueling and storage of gas marine fuels. By producing hydrogen at the point of consumption from a mixture of methanol and water, e1 Marine’s system enables the safe, efficient and economic use of hydrogen as a marine fuel. The technology is ideal for anything that requires continuous power over extended periods, including workboats and medium-range passenger vessels, or to provide backup power in ports and harbors.”

Maritime Partners, a tailored leasing solution provider to the maritime industry formed in 2015 by Bick Brooks and Austin Sperry and headquartered in New Orleans, owns a fleet of more than 1,600 towboats, barges and other maritime assets on long-term charter, primarily on the nation’s inland waterways.  The firm had another major announcement last week: the acquisition of the portfolio of J. Russell Flowers Inc. (see story in this issue).

The partners stress that this is a sustainable solution driven by the market, not government mandates. “This is not a pie-in-the-sky solution that requires government funding,” Livingston said. “Oil company RFP’s already require contractors to show how green they are. The drive to adopt sustainable solutions is coming from customers, not the government.”

“The winds of change are blowing, and we want to be in the forefront of that change,” said Maritime Partners analyst Troy Bernier.

In the Facebook presentation, Sperry said the partners would use the next four to six months to “iron out specifications” before announcing a shipyard. He expects to be cutting metal within six months and to have the vessel in the water by 2023.

Caption for photo: The Hydrogen One is expected to enter service in 2023.