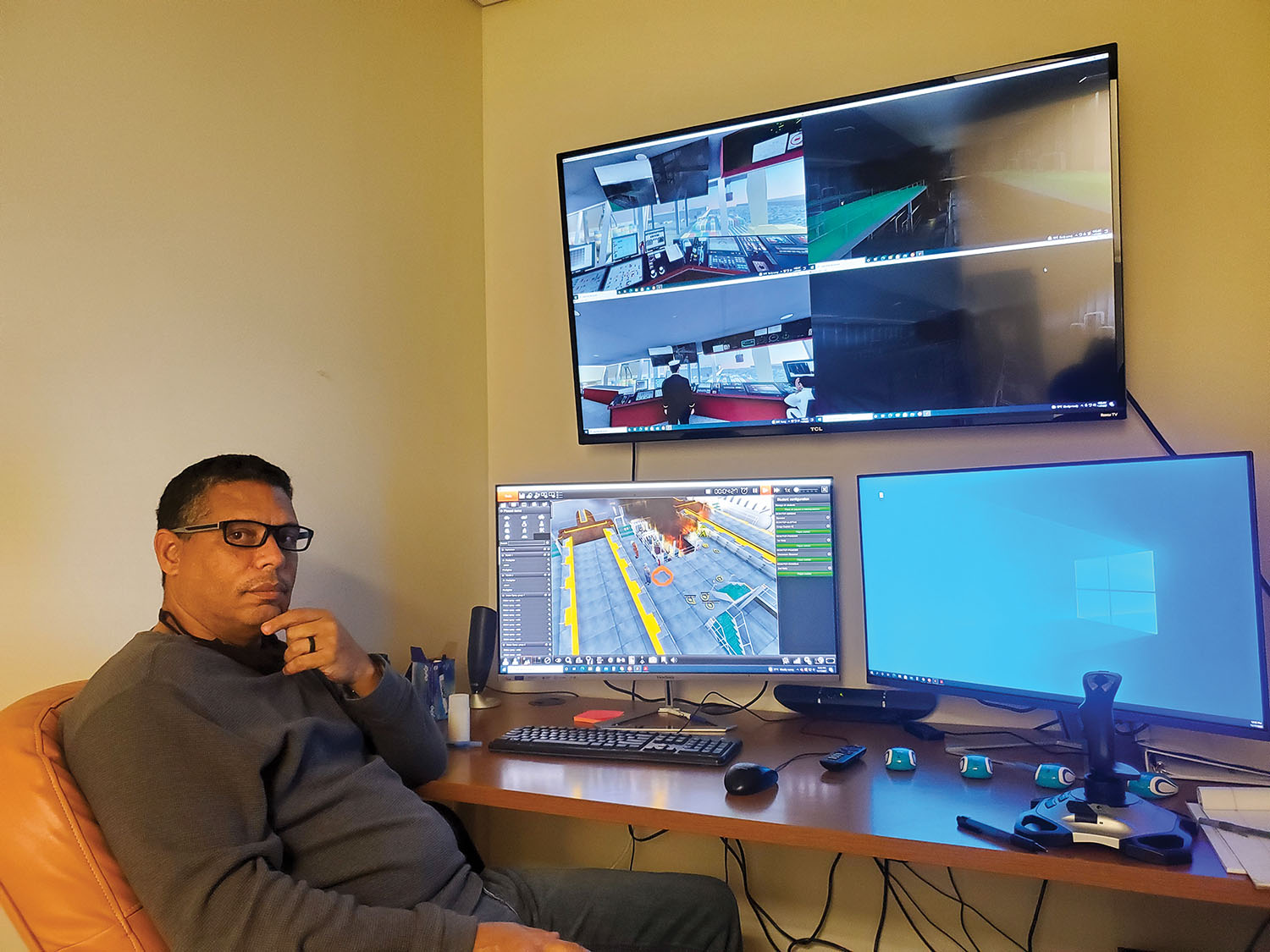 “Captain, the laundry room fire is out,” the chief engineer said over the VHF radio. “But there’s still a little smoke coming from under the door, so I’ll crack it open just enough to hit it one last time with the extinguisher before we set the fire watch.”

“Ok, Chief, but make sure to ground the CO2 extinguisher on the deck so it doesn’t shock you,” the captain responded, pleased that his well-trained crew responded so quickly.

The engineer just introduced oxygen into a closed space that already had fuel and heat. The backdraft fire reignited quickly, causing burns to the engineer and deckhand who was working with him. Now there is a fire and man-down incident.

The focus is on command and control of fires, chemical releases, oil spills and other incidents onboard vessels and at industrial facilities.

As a district fire chief for the city of New Orleans with 29 years of fire department experience, Faciane has been an instructor at Delgado for 18 years.

He brought the idea of partnering with the Netherlands-based XVR computer company to Delgado. Initially the program was designed for petro-chemical plants, offshore production platforms and shore-side incidents of ports.

But while the program was not designed for vessels, Faciane worked with Alan “Rosie” Rosiere, a retired New Orleans fire chief with 37-years experience as a Delgado instructor, to develop scenarios for fighting onboard fires in enginerooms, high pressure valves, laundry facilities and galleys. Programs can also simulate oil spills and helicopter crashes on offshore platforms.

When Delgado was designing its new Marine and Industrial training building several years ago, Rick Schwab, the senior director, asked instructors what they wanted. Looking forward to implementing XVR-type computer training, Faciane was able to secure a room for an instructor to manage the XVR training computers and a separate room with workstations for students.

Each of five students participating in a session, acting as captain, engineer, deckhand or tankerman, only sees his particular area on his computer screen in his work station and wears a headset to isolate him from the other students. Headsets provide the simulated radio communications. The instructor sees all of the scenes.

The captain, on the bridge as a station bill requires, only sees out the wheelhouse windows, unless the fire gets out of hand, at which point he sees smoke then fire on his screen. It is via VHF radio that the captain gets calls as the crew reports the fire and progress as teams respond.

The engineer sees the fire in the engineroom. The deckhand and tankerman only see their area. If the training scenario goes well, the fire is reduced until it is out. But if needed steps are overlooked, things begin to go badly. The fire grows quickly and smoke begins to block out vision on the computer screens, just as smoke in a real fire restricts visibility.

It is a dynamic scenario. A NAVIC-directed list of steps to take is checked off as participants react. Additional students in a larger classroom can watch all the screens remotely. A “hot wash” review of participants’ actions follows each revolution. Scenarios can change as the instructor dials in a water pump failure or a fire hose getting kinked or cut.

Topics on the checklist include sounding the alarm, notifying the bridge, mustering the crew, checking pumps for water priming, shutting off ventilation and closing dampers, calling the office, Coast Guard and the fire department if in port, dealing with stability issues if too much water is required, and more.

If the captain forgets to sound the general alarm and muster the crew, Assistant Engineer Nicholas Sabane will turn up missing.

If the fire gets out of control and the engineer wants to dump the CO2, does the captain insist all crew get out of the engine space before hitting the button? If not, Engineer Sabane will be trapped in the engineroom and now there is a man-down element.

If the crew forgets to close the dampers, the CO2 escapes and the fire expands. Now fire escalates to an abandon ship incident.

Using Google Earth and a video-equipped drone, Faciane is able to re-create a scene in the days before a training session begins. When the sessions begin, participants will then be able to recognize it on their training station screens, including physical objects and structures, adding to the realism.

At one dockside tank storage facility, the company used the XVR training after installing a new ammonia tank. The company was concerned that an elementary school was nearby and might need to be evacuated if here was a large, uncontrolled release of ammonia.

As Faciane ran plant employees through training scenarios, he changed gas leak quantities, wind direction and speed. Together, they quickly realized the firefighting and emergency gear equipment at the p’lant was stored in a shed too close to the tank, making it inaccessible in an actual incident.

“It can be hard to convince folks to get away from doing things that they have been doing forever,” Faciane said about the initial pushback to the computer-based fire-fighting class. To demonstrate realism to companies, he recreated the Deepwater Horizon blowout to use as a selling tool, although he said he has never used that scenario in a classroom.

Traditional firefighting training is “putting the wet stuff on the red stuff.” Delgado is well equipped with a fire field containing many fire props that can simulate fires at high-pressure valves, pits of petroleum, in vessel engineering spaces and quarters, and many others. Basic firefighting students learn how to safely extinguish those fires using chemical extinguishers or water hoses.

“But if we combine basic firefighting drills with advanced firefighting, we are shortchanging both the new-hire and the experienced mariners,” Faciane explained.

“New-hires need the extinguishers and hose dragging experience,” he said. “That’s basic. But after an experienced mariner has done it many times, he is getting very little from that sort of training. Experienced crews need to learn command and control of incidents, and XVR gives that training to them.”