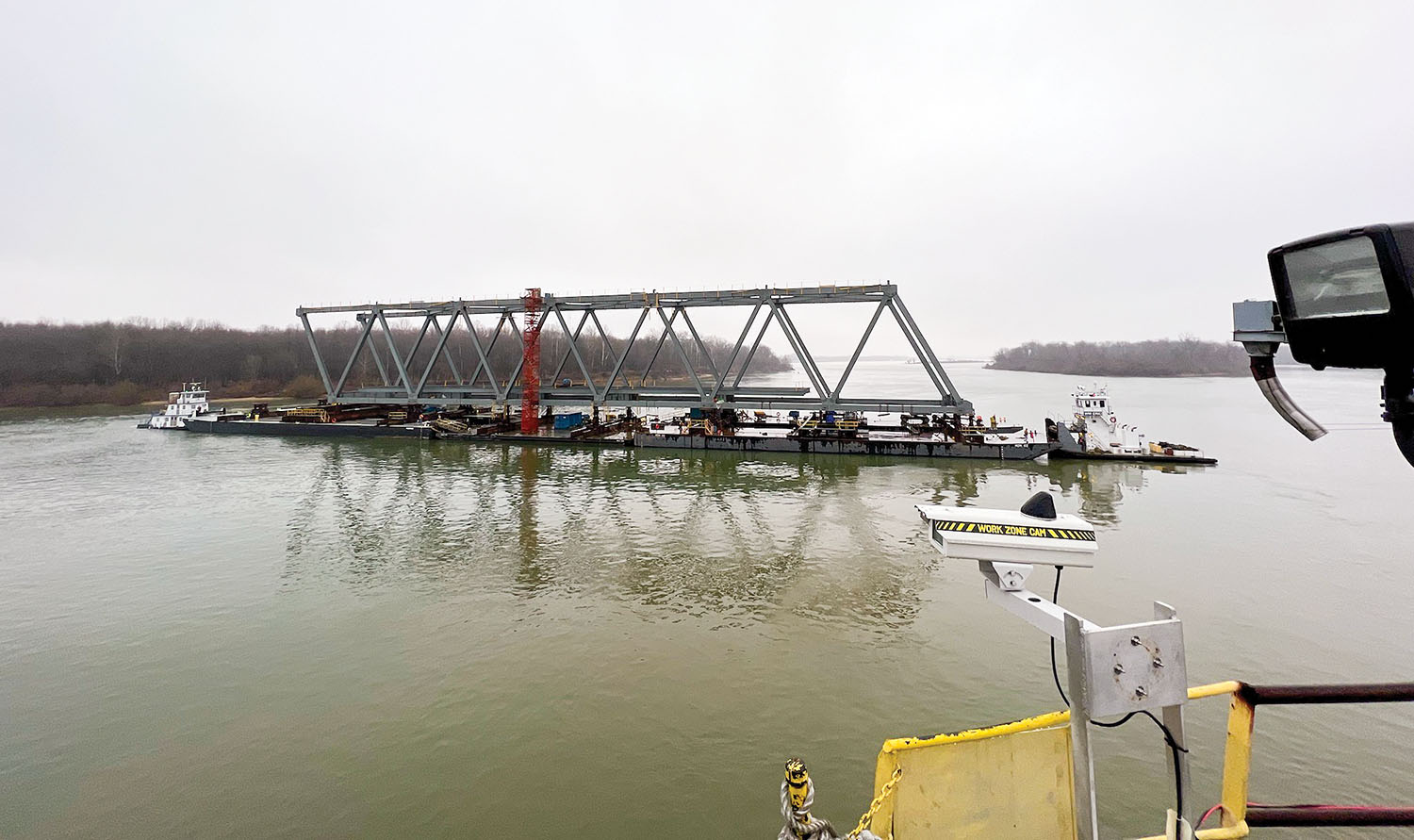 Construction of the steel superstructure of a new bridge over the Cumberland River at Smithland is nearing the halfway point and just reached a major milestone.

On December 29, crews aboard two vessels worked in tandem to move barges supporting each end of the span out into the Tennessee River and rotate it before moving it back in place at the Paducah-McCracken Riverport Authority, where it is being built. When completed, the steel truss will be 700 feet long and 48 feet wide.

The truss is being built atop four jumbo barges and three 120-foot barges, provided by Paducah Barge and McDonough Marine Service. James Marine reinforced the jumbo barges to be able to handle the load. It already weighs 3.2 million pounds, with another 1.2 million pounds of falsework, the temporary support members, said Scott Swamback, project manager for American Bridge Company, the subcontractor on the project responsible for the steel structure. Jim Smith Contracting Company is the contractor for the $63.6 million Kentucky Transportation Cabinet bridge at Cumberland River Mile 2.7.

The truss must be pushed to the center of the river and rotated five more times before the truss assembly is completed in February. Bolting and a punch list of miscellaneous items must then be completed. It will be painted Kentucky Blue between March and July before it is floated down the Tennessee and then up the Ohio to the site on the Cumberland this summer.

Jim Smith Contracting Company and American Bridge Company chose the Paducah-McCracken County Riverport Authority as the construction site in August in part because of the capabilities of its Comansa tower crane. The site is also rarely  affected by high-water conditions, allowing work to continue even when Mother Nature might otherwise interfere. The first piece of structural steel was placed September 9.

Construction of the bridge is now about three to four months ahead of schedule because of warm, dry weather that continued into December, said Keith Todd, spokesman for the Kentucky Transportation Cabinet’s district 1 office in Paducah.

High water delayed construction on the north main pier, but only for about a week, he said.

“As weather allows this winter, they’re continuing to make progress on the main piers,” he said.

The bridge is being built immediately downstream of the Lucy Jefferson Lewis Memorial Bridge, which opened to traffic in 1931. It will be the new route carrying U.S. 60 across the river. The new bridge will have a 40-foot-wide, two-lane deck with 12-foot driving lanes and wide shoulders that will provide ample clearance for most farm equipment to cross without stopping oncoming traffic, KYTC District 1 engineer Kyle Poat previously said.

The Seamen’s Church Institute worked with the contractor to determine alignment and pier placement to aid river traffic passing beneath it. Pilots used SCI simulators to virtually navigate through various pier placements and alignments during the day and at night and with varying river conditions. The feedback helped transportation officials determine the need for a design where the piers supporting the bridge are out of the water at normal water levels, Todd said.

Construction on the new bridge is expected to be complete in spring 2023. It is 80 percent federally funded.

Caption for photo: The steel truss of the new $63.6 million Cumberland River bridge rotates in the Tennessee River just off-shore from the Paducah-McCracken County Riverport Authority. The truss must be turned six times during construction. It will then be floated to Smithland, Ky., for installation. (Photo by Scott Swamback/American Bridge Company)